Leveling in World of Warcraft is Fun Again

It's also the most accessible WoW's ever been. Shadowlands is the eighth expansion to be developed for World of Warcraft, a game that’s been chugging along soundly since its release way back in 2004. Sixteen years and seven live expansions later means there’s an absolute bonkers amount of content available to play. Up until last week’s pre-Shadowlands 9.0.1 update, new and returning players had to slog through each and every expansion on their way to the level cap of 120. Not only did the leveling process take a week or two of playtime for average players to clear, but the whole affair was a disjointed mess due to experience gain adjustments made by Blizzard throughout the years. Needless to say, it wasn’t the most enjoyable of grinds.

But that’s largely not the case anymore thanks to the level squish introduced in last week’s pre-Shadowlands patch 9.0.1. That 120 level cap has been dropped back down to the original “Vanilla” cap of 60 (level 50 until Shadowlands drops), and to go along with the squish is a new mechanic called Chromie Time. So long as the player has a character at level 50 they can visit Chromie in their faction’s capital and pick one of the six older expansions to level from 10 to 50 in. It’s simple on paper, yet it makes leveling a substantially more pleasant and rewarding experience for everyone. 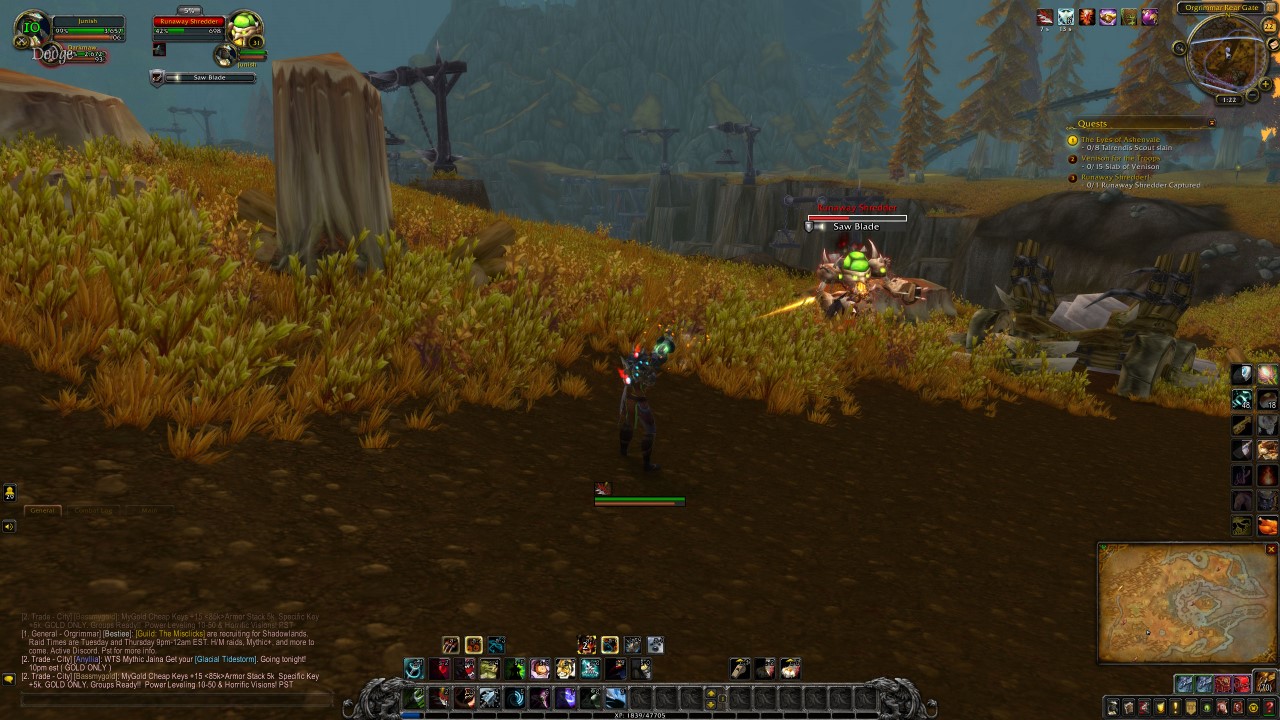 World of Warcraft’s improved leveling has finally made me into an “alt-oholic”.

I’ve never been a fan of leveling alts, even back when I played World of Warcraft obsessively during the Wrath of the Lich King days. I only had to plow through the Vanilla version of Azeroth, and the Burning Crusade expansion before reaching the starting gates of Wrath, but it took me ages to get my first ever alt, a hunter, to that point. It just wasn’t fun (having to level in Hellfire Peninsula didn’t help matters). Even after Wrath, when I became a more casual player, I’d rarely drum up the motivation to level alts.

I’ve leveled three alts in the past week alone. I’ve brought more alts into the current endgame in the last seven days than I have in sixteen years. Let that sink in for a moment: I’ve been playing WoW since Vanilla, and I’ve finally caught the alt itch. I probably should get the itch looked at, but the smaller range of levels I have to clear to reach cap, and the focus on one expansion per toon has been the incentive I’ve needed for years.

It doesn’t hurt that each level-up feels rewarding again. I’m always getting either some new skill to play with, a talent to ponder, or a boosted ability that makes me feel more powerful. The experience bar fills at a steady pace, and killing mobs makes an appreciable dent in it for the first time in what feels like, well, a literal decade. The old cap meant higher levels often took hours upon hours to ding even a single time, but now I can leap a full ten-plus levels in a single sitting. It feels fucking fantastic if I am to be blunt.

The improved leveling cadence in World of Warcraft wouldn’t feel nearly as good if myself and everyone else were still leapfrogging all over Azeroth and beyond to hit cap. Over the years Blizzard has tweaked the experience required to reach the level cap to make the process less of a pain for new players and those leveling alts, but in turn that meant players rarely got to sit back and enjoy any single expansion’s base story. You’d easily make it a quarter of the way into Wrath before having to jump into the Cataclysm zones to continue progressing. Sure, you could stay behind, but you’d essentially stop moving the experience bar forward.

That’s sixteen years of content that all flew by in a blur. To call it disjointed, as I have above, is polite. It was a mess, and the cadence left many of Blizzard’s best quests ignored. But, as of patch 9.0.1? Why, I can dedicate my shiny new mage to vanquishing the Lich King, just for old time’s sake. I barely remember Mists of Pandaria, so why not opt into that as my monk’s level 10 to 50 grind? Chromie Time gives all those old expansions a chance to breath again, and being able to level a character to 50 in only one means leveling a new alt feels fresh each time, because I can simply pick a different expansion than the last for a change of pace. 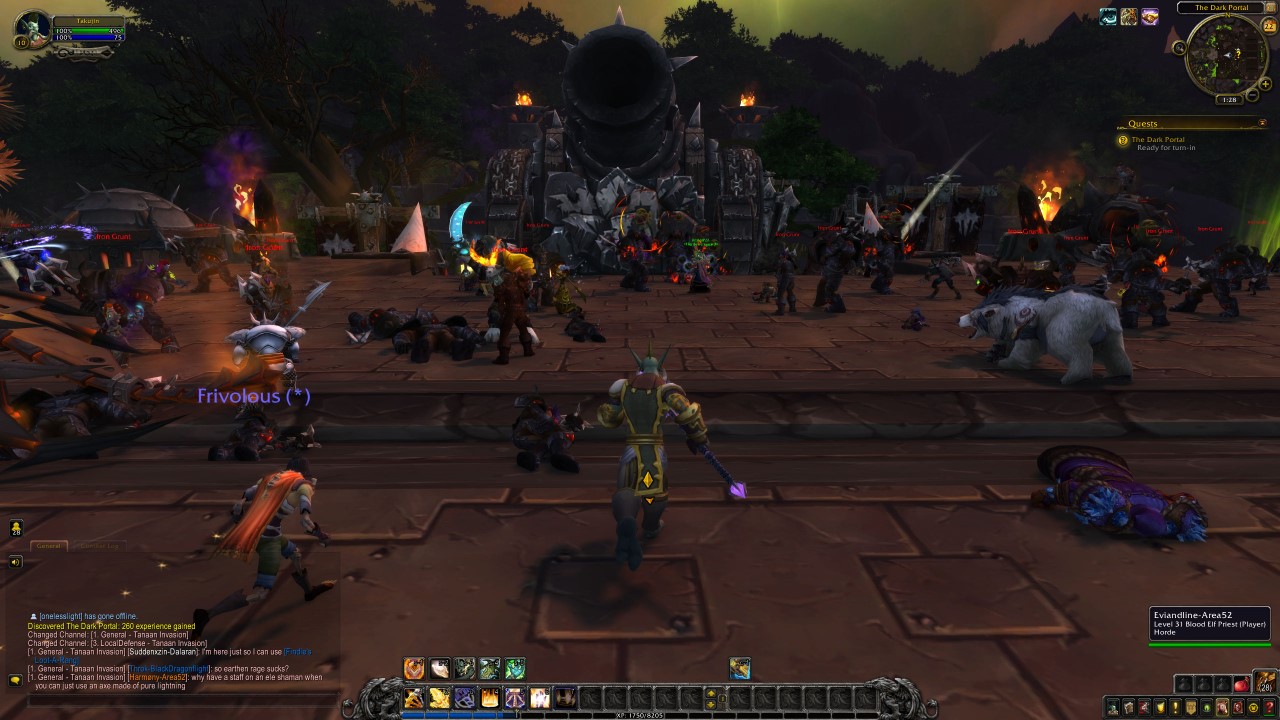 The system isn’t perfect though. While leveling in the current World of Warcraft expansion, Battle for Azeroth, I discovered I couldn’t hit level 50 by completing only the crucial story quests. Only after clearing all the side quests in Zuldazar was I able to focus on the story from there on out. That’s not a big deal, but this was a common issue across all the expansions I leveled in, and the amount of side-quests and additional grinding required for each, in addition to the main quests, was all over the place.

Part of the appeal of Chromie Time is seeing all those old stories through till the end (at least to the point prior to their post-expansion updates). If you follow only the story you’ll need to hunt content down afterwards to make the leap to 50, but over-indulge on the side content and it’s easy to reach level 50 prior to finishing the story. That’s a huge problem right now, because Chromie Time kicks your ass back to your capital when you do, and then disables itself.

What makes Chromie Time work is level-syncing: when you enable it the whole world (not just your chosen expansion) scales dynamically from level 10 to 50. That means quests, experience, loot, and difficulty is always at your level. You can still quest without Chromie Time, but you’ll have to do so the old fashioned “bounce around each expansion with manic abandon” way. And, once you hit 50 and it shuts off? Everything scales back to its original values, meaning players eager to pick up where they left off will find themselves one-shotting enemies, which gets real old, real quick.

Experience gains need further fine-tuning across the board, and Blizzard should go back and tailor each World of Warcraft expansion around its main quest chain. The should balance the leveling curve around completing the story with some side-questing, then post the estimated time to finish in the Chromie Time UI. That, and maybe they should signpost the story quests with that slick new quest marker they’re using in Shadowlands for story quests (similar in function to Final Fantasy XIV’s main scenario quest marker). Finally, Blizzard could roll in the ability to more easily pause Chromie Time (something that’s a bit cumbersome to do right now), and most of the quirks will be things of the past.

Even with these minor faults, leveling in World of Warcraft is a blast once more, and I can’t stop myself from contemplating which class I’ll level next. I never did give Warlock a fair shake, but I can now get one to level 50 in only a couple of days of casual play. That’s pretty damn awesome if you ask me. We’ll have to wait and see how Covenants and Soulbinds pan out as endgame progression once Shadowlands arrives later this year, but in the meantime I’m having all sorts of fun getting characters ready for WoW’s eighth expansion.