WoW: Shadowlands – What are Timewalker Campaigns, How to Use Chromie Time 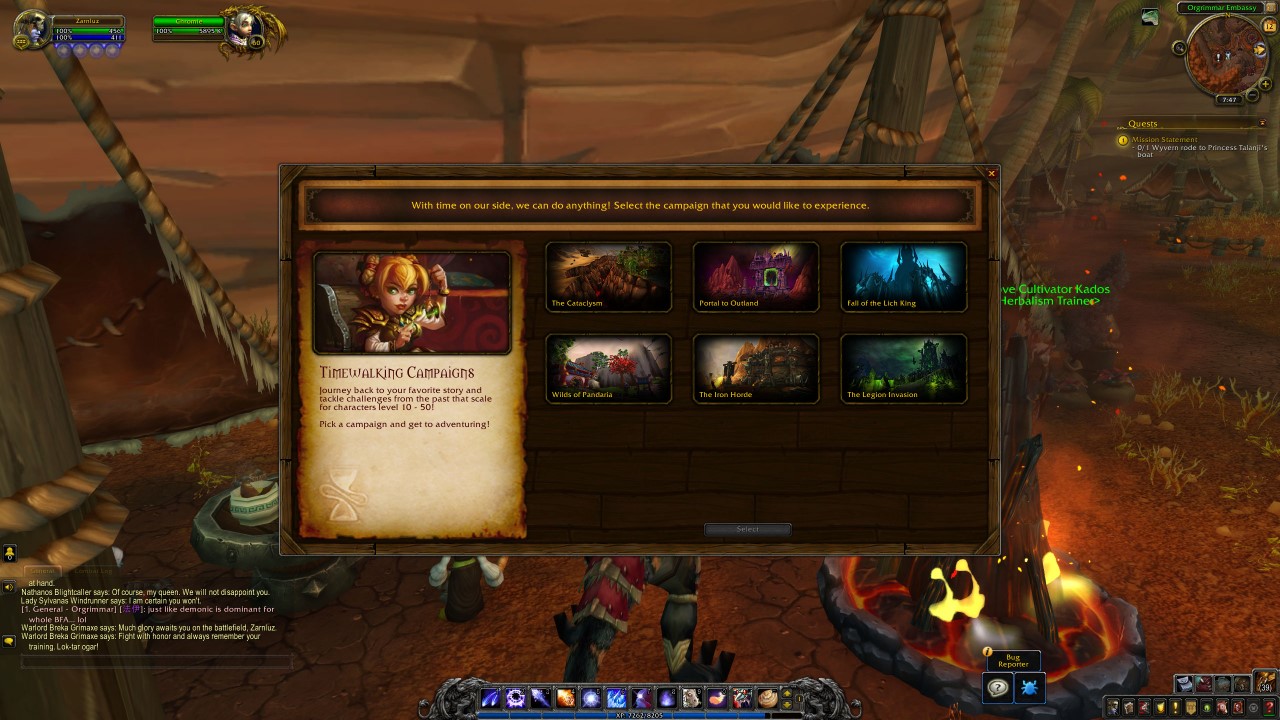 World of Warcraft: Shadowlands introduces Timewalker Campaigns – AKA “Chromie Time” – to the long running MMO. Now that the pre-expansion patch has squished everyone’s levels down to fit within the new level 60 cap, players can opt to level from 10 to 50 in the expansion of their choice. There are a couple caveats, however, and players who haven’t reached level 50 on at least one character won’t be able to utilize the new feature quite yet.

Timewalker Campaigns (Chromie Time) are accessible after reaching level 50 on at least one character.

The new Timewalker Campaigns (formerly known as “Chromie Time”) in World of Warcraft: Shadowlands are unlocked once at least one of your toons reaches level 50. Until then the only expansion that will feature full level sync for levels 10 to 50 will be Battle for Azeroth. The older expansions will remain accessible, but they will have a more traditional level ranges that do not sync.

Timewalker Campaigns in Shadowlands allow you to pick any previous expansion you desire and force on level syncing for levels 10 to 50 (for the whole world). You’ll be given the starter quest for that expansion, and can comfortably level there without having to leave. You can also level in any other area with full level syncing, but you’ll be limited to the dungeons from your chosen expansion (unless you spend more than 15 minutes in queue: the dungeon finder will allow you to pick whatever dungeon you want after that).

Timewalker Campaigns can be swapped at any time, and you can even pause experience gains if you want to finish an entire expansion’s storyline without the level 50 interruption (you’re teleported back to your capital to start up Shadowlands once you ding 50, and Chromie Time is disabled). To access Timewalker Campaigns you’ll simply need to visit Chromie at the embassy in your capital city (Orgrimmar for the Horde, and Stormwind for the Alliance). She’ll appear as an hourglass on both the map and minimap. Talk to her to pick your “campaign”, and off you go. Do note you don’t have to use Timewalker Campaigns to level alts.

You can always jump back into the Battle for Azeroth expansion (it will always level sync for levels 10 to 50 until the next expansion replaces it with Shadowlands as the “leveling” expansion), or tackle the previous expansions as you would have prior to the level squish, albeit with new level ranges to compensate for the change. You can also disable “Chromie Time” whenever you want, if you so choose, by revisiting Chromie. Finally, if you’ll need to clear the initial tutorial triggered from reaching your capital city around level 10 to completely unlock Chromie time.

Home / Game Guides / WoW: Shadowlands – What are Timewalker Campaigns, How to Use Chromie Time