Assassin’s Creed Valhalla – How to Save

Be sure to save often, especially after an hour of exploration. 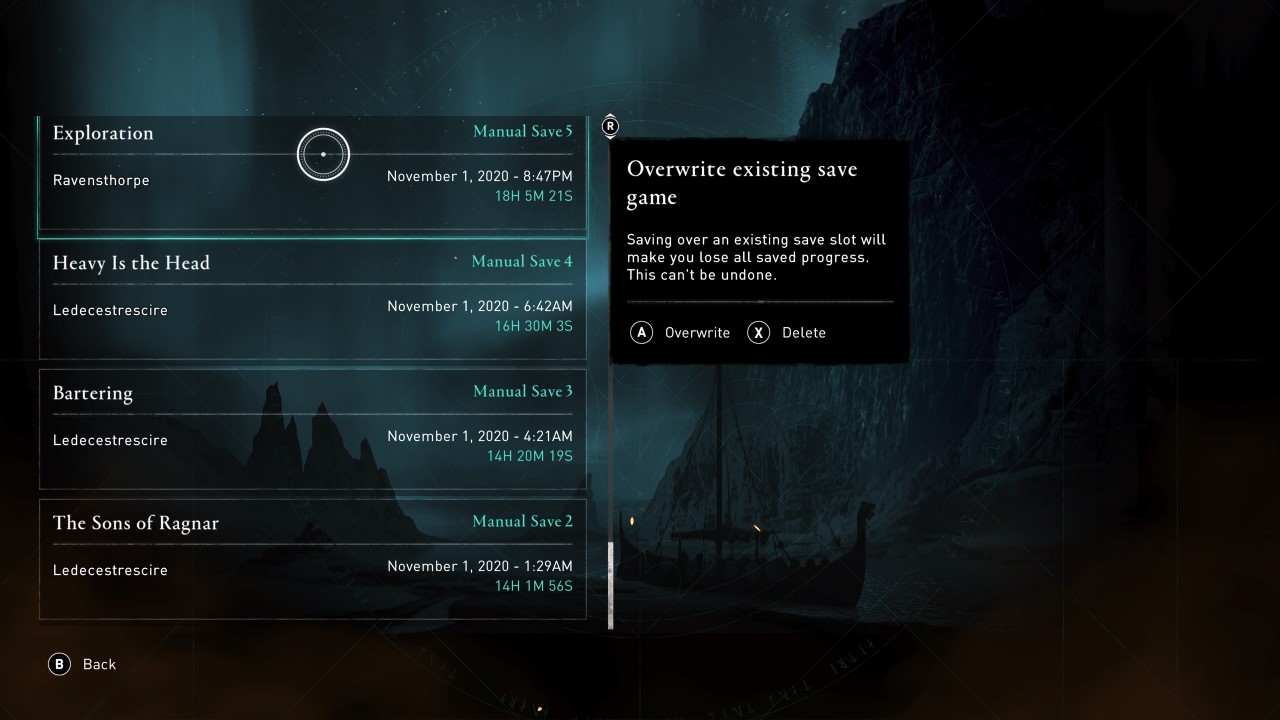 Assassin’s Creed Valhalla has a more forgiving save system than Ubisoft’s other recently release title, Watch Dogs: Legion, but you’ll still need to be mindful of when your last save was created. Thankfully you can manually save, which comes in handy when the auto-save doesn’t have your back.

Assassin’s Creed Valhalla has both a Save and Load option in the main menu.

Creating a manual save in Assassin’s Creed Valhalla is simple, even on console. The main menu has both a Save and a Load option, and selecting save will allow you to either create a new manual save, or overwrite an existing one. That, and there is an icon of a cloud that’ll appear on saves that have been uploaded or downloaded from the, well, cloud. You can only create up to 20 manual saves, so be mindful of your old saves as you get deeper into the game.

PC players can access the main menu simply by pressing Escape. Console owners of Assassin’s Creed: Valhalla will have to jump though a single hoop to reach the main menu, but it isn’t cosmic. Both Select/Start (Options/Touchpad) lead to the game menu, and tapping left on the D-Pad will lead to the actual main menu. From here console players can select Save or Load as needed.

The game does feature an auto-save, but it can be a touch stingy. Looting “Wealth”, “Artifacts”, or completing “Mysteries” on the map tend to trigger an auto-save, as does fast-traveling and crossing into new areas. That said, missions don’t “checkpoint” as often as you’d assume. It’s not uncommon to lose upwards of thirty minutes of progress to an unfortunate death. Assassin’s Creed Valhalla won’t always allow you to manually save in the middle of a mission (or while swimming in water deeper that your ankles), but if you are about to move on to a new location during a mission it’s best to check and see if you can.

Home / Game Guides / Assassin’s Creed Valhalla – How to Save