Become the glinted bane of your enemy's existence Sniping is as deadly as ever in Call of Duty: Black Ops Cold War. That news either ignites excitement or despair depending on whether you are the one peering down the high-powered sight or the unfortunate soul seeing the scope glint. Despite heavy changes to sniper rifles since beta, the weapon category can be made viable for quickscopers early on.

The Pelington 703 sniper rifle can be unlocked without journeying too far into the 55 rank progression system. At Rank 4, Create-A-Class unlocks and immediately bestows a handful of starting weapons upon the player. The Pelington 703 is one of these weapons.

Here are our recommended loadouts for building out the entry sniper rifle into a beast that can hold its own at a variety of engagement distances. We provide two different loadouts depending on whether you prefer a more aggressive approach, jumping between near and far targets, or have a tendency to hang back and hardscope. 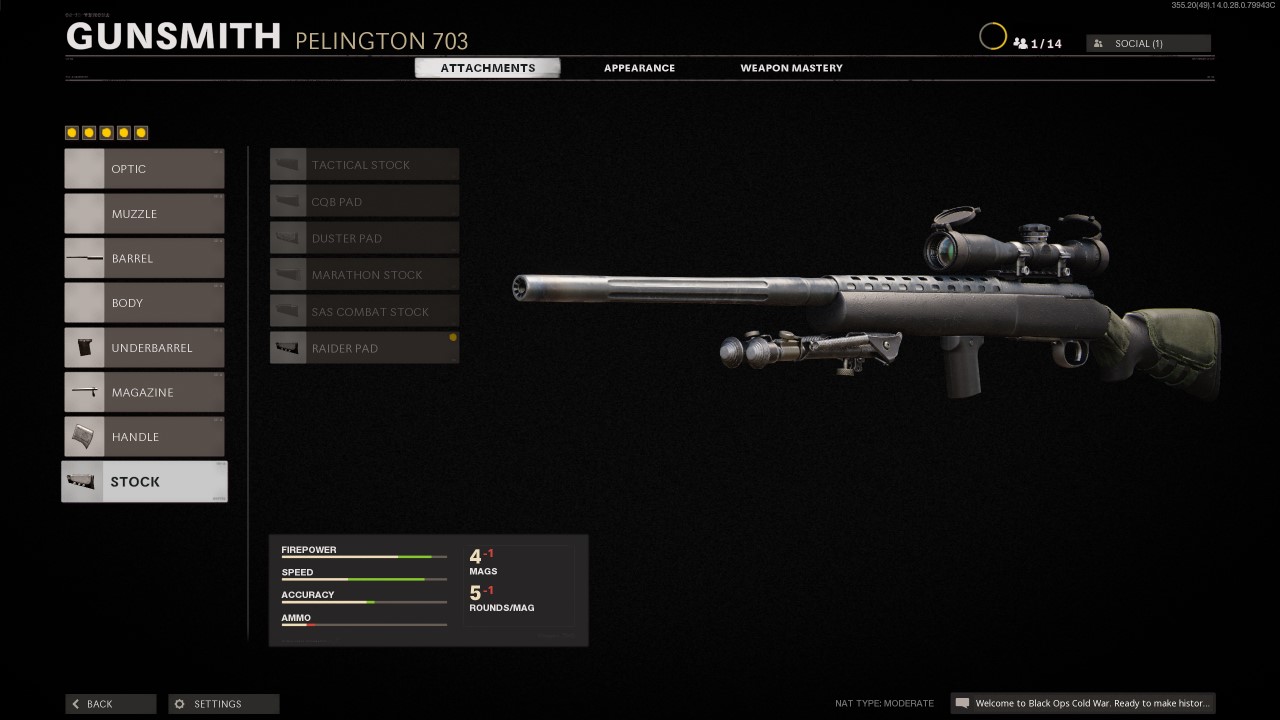 Getting all the pieces to this loadout will take time, as multiple attachments are unlocked towards the end of the weapon’s level progression. Combining the attachments above will ensure a snappy ADS time, even with the nerfs that hit snipers between the beta and launch. The loadout prioritizes mobility and responsiveness, allowing for rapid response to hostile contact.

The 26.5″ Tiger Team Barrel carries a host benefits. Reload speed, damage, bullet velocity, and fire rate all see a buff. These characteristics are critical in responding quickly to emerging situations. The sniper drops from 5 to 4 rounds before requiring a reload, but this limitation is partially remedied by another attachment.

The Fast Loader Magazine also carries zero negatives. A 30% boost to reload quickness is provided. Given that the recommended barrel removes a round from the default count, the increased reload speed counteracts the reduction by limiting the impact of more frequent reloading.

The Airborne Elastic Wrap Handle is an absolute must have. The operator gains 90% flinch resistance, making it infinitely easier to maintain a target while taking fire. In addition to that invaluable buff, ADS gets a slight boost and it can be maintained while going prone. The cons, a loss of shooting move speed and sprint to fire time, are lessened by other attachments.

The Raider Pad Stock bumps up sprint to fire time, more than making up for the chosen handle, and aim walking movement speed. Mobility remains a focus even when aiming down the sights. The hit to hip fire accuracy shouldn’t even ping on anyone’s radar. No-scoping may create fun highlight reels, but they are far from a reliable source of consistent kills. For snipers that dig in on the outskirts of maps, this loadout sacrifices ADS speed in favor of overall weapon control and bullet velocity. When taking shots from the further reaches of the map in Fireteam, the loadout’s increased bullet travel time reduces the need to lead targets heavily. Having less scope sway and recoil pairs nicely with a larger mag, allowing for quick follow-up shots.

The 27.2″ Combat Recon Barrel greatly improves bullet velocity by a whopping 75%. Players will need to combat a little added scope sway, but that’s not a terrible price to pay for negating the need for greater target leading at range.

The Bipod Underbarrel  attachment keeps both vertical and horizontal recoil in line. This will allow for more accurate follow-up shots, as the reticle won’t deviate as much after firing. The minor hit to sprinting move speed shouldn’t be too noticeable since this loadout revolves around finding advantageous areas to settle in.

The Salvo 9 Round Fast Mag Magazine adds gives a greater pool of ammo and available shots before reloading becomes necessary. The added bonus of the mag is that reloading is faster than hand-feeding rounds with the bolt options. ADS time is decreased, but the loadout isn’t for those trying to snap to enemies quickly. Instead, it is built around remaining scoped for longer periods of time.

The Airborne Elastic Wrap Handle bridges the two different loadouts. That is because of the invaluable flinch resistance bonus. Getting caught up in a hail of bullets won’t stop you from keeping the reticle on target.

The SAS Combat Stock tosses in a bit of mobility to an otherwise fixed playstyle loadout. The main point is the 40% increase to aim walking movement speed. This will allow players to reposition quicker or make themselves harder to hit without taking the sight off of the target.

Now that you have an idea of which loadout to apply to your preferred playstyle, take a look out our Multiplayer Perks Guide to see what you should pair with the Pelington 703.