Bloodborne Guide: Tips On How To Beat The Cleric Boss 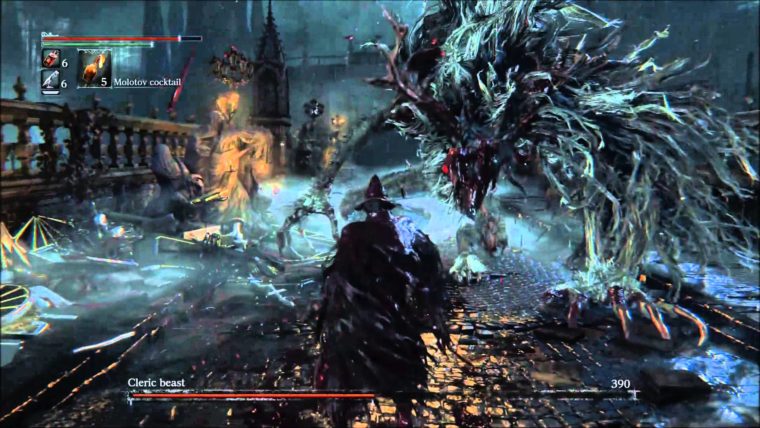 If you have picked up Bloodborne, chances are that you are having trouble playing the game. Bloodborne is a difficult game, even at the very beginning. The first boss that most people will encounter is the Cleric boss. We’re here to help you get pass this first boss.

It’s worth mentioning that you need to defeat the Cleric boss in order to unlock another save checkpoint. It’s very important you try and defeat this boss, or else you will be stuck at the very beginning of the game forever. I would also like to mention it took me several goes and hours to beat this boss. I’m sure it took me 5 or more tries until I found a technique that works. Patience and perseverance are needed in order to succeed in Bloodborne.

Before you go up the bridge to face the Cleric, I suggest you stock up on a lot of Molotov Cocktails and Blood Vials first. A lot of the enemies at the beginning of the game drop a lot of Blood Vials for you to pick up. You can hold up to 20 of these at a time. Blood Vials are important because they replenish your health.

After you have 20 Blood Vials and 10 Molotov Cocktails, then you are ready to face the Cleric. There’s not much room to fight because you are on a narrow bridge. Make sure not to be cornered by the beast because if you get stuck, he is likely to kill you off instantly. It’s best to keep at a mid-range distance from him. Also, I felt guns were useless against him. The weapon I used to defeat him was a “Saw Cleaver”. 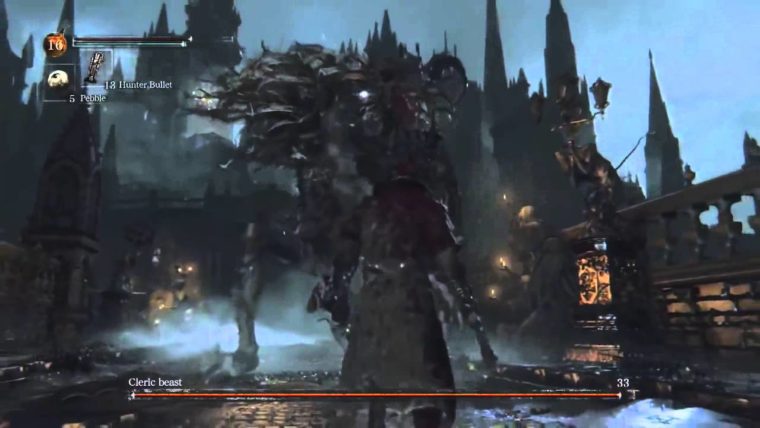 After you have thrown three or four Molotov Cocktails at him, he will fall down to his knees. This is your chance to go up to his face and slice him like crazy. Your character will then stab his face and you will do at least 363 points of damage to him.

I suggest you keep throwing Molotov Cocktails at him and repeat this pattern. Just keep doing this until he falls to his knees again, and be sure to press Triangle to replenish your health constantly. The last thing you want to do is die, because you will then have to collect all the Blood Vials and Molotov Cocktails all over again. Trust me; I had to do this several times…

If you run out of Molotov Cocktails during the fight, don’t worry because at this point you should see that he only has one quarter of his life left. Just be sure to keep pressing Circle to dodge his attacks, and press Triangle to keep your own health bar full. You want to avoid getting grabbed by him. If you get grabbed by his hands, he will slam you to the ground and take a chunk of your life. Sometimes this will even kill you instantly.

At this point of the fight, just keep hacking and slashing at his feet and constantly press circle to dodge his attacks. The Saw Cleaver weapon I used usually takes off 100 or more points off of his life bar. Hacking multiple times at his feet and torso will eventually decrease his life bar rapidly. When you do this, he will eventually fall and a new save checkpoint will open up for you.

This is my own technique I came up with to defeat the Cleric. Feel free to comment below for any other advice you may have for defeating this boss.

Home / Game Guides / Bloodborne Guide: Tips On How To Beat The Cleric Boss