After the really sad ending to the first stage of Call of Duty: Advanced Warfare, Atlas opens on a somber note at a funeral. In one of the stranger quick time events in gaming history, hold square to “Pay Respects.” Walk towards the vehicles to trigger another cutscene as we have our first interaction with Kevin Spacey’s character Jonathan Irons, father of Will Irons, who gives you a second chance.

After this, we will jump forward in time and be at Camp David, Maryland, where we must follow Joker. Stay low and take out the targets up the stairs. With your teammates’ help, this should be very simple without a big gunfight.

Follow Joker into the building and move towards the door they are standing outside of right now. As soon as they pop open the door, toss in a threat grenade and take down all targets quickly by shooting through the door as soon as they are illuminated.

Move to the next waypoint and plant the Mute Charge. The game will now enter slo-mo, where you can easily take down the very few enemies in the room and save the president.

Continue to the next marker and then one more after that, where you will then see soldiers you can take down. Once they are all dead, move to the next waypoint for even more soldiers to pop up, but can be taken down very quickly.

Follow Joker and the game will tell you to move into a prone position, which you should do. Wait for the vehicles to pass and then get back up and follow Joker again. Eventually, you will reach a checkpoint before a lot of enemies will appear, so hide and start picking them off one by one. When the vehicle arrives, rush for it and press square to open the door, where you will be in for quite a surprise. 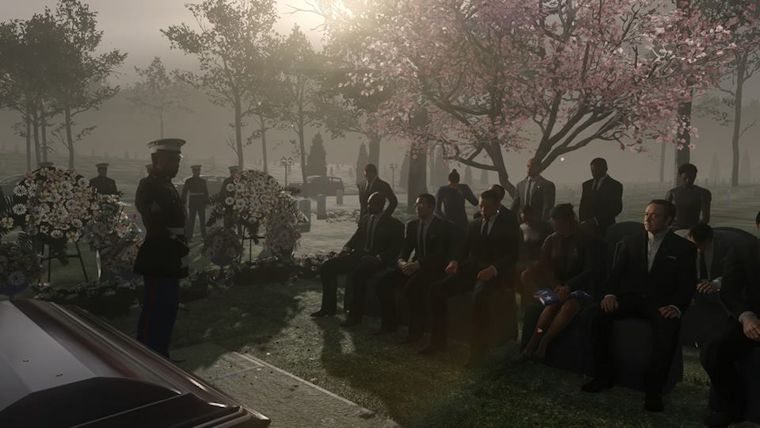 After the quick scene, enter the vehicle for a tour of the premises and Atla’s advanced warfare. Upon arriving, follow Gideon through the training facility and into the Exo Research area. Move towards the market at the table and when prompted, press square to put your arm on the table. Move the left analog stick around three times when prompted to allow the doctors to test and recalibrate your arm.

Move towards the “follow” icon on the map to return to Gideon, who will lead you to the Holographic Range. Pick up your weapon of choice and then move back to the range itself and press square to begin Target Training.

Once it starts, hit all red targets, but always avoid the blue, as they are friendlies. Part of the way through, you will be allowed to use a new Exo ability in Overdrive by hitting up on the D-Pad, which slows down everything for much easier shots. By scoring Excellent in this exercise, you can even unlock the Dead Eye Trophy. Once you feel satisfied with your performance, head to the next waypoint.

Now follow Gideon to the Grenade Training course. Move to the console and press square to begin. After the initial tutorial run, try it once more to continue. Just like before, there is an achievement to unlock for getting an excellent score, this time Grenadier. As a result, you can feel free to keep trying.

Follow Gideon again to the weapon room, as you can choose what you want before you take another crack at the simulation. Now get into the other elevator opposite of Gideon and prepare for the simulation, this time in assault mode. This means you cannot sneak around, as enemies already know you are there each time.

After the toughest battle you’ve had so far this level, move towards the breach icons and enter the building, as before, by any of the three entrances. Whichever door you pick, press R3 to breach. Take down all enemies you see and continue to the media room, which is also breached by hitting R3. Kill the three enemies in slo-mo and head back towards outside.

When nearing the front of the house, drones will break through the windows, so quickly use your EMP grenade to take them out. As soon as you head through the door and back outside, a checkpoint will be reached, which is good as a lot of enemies will be in your path. 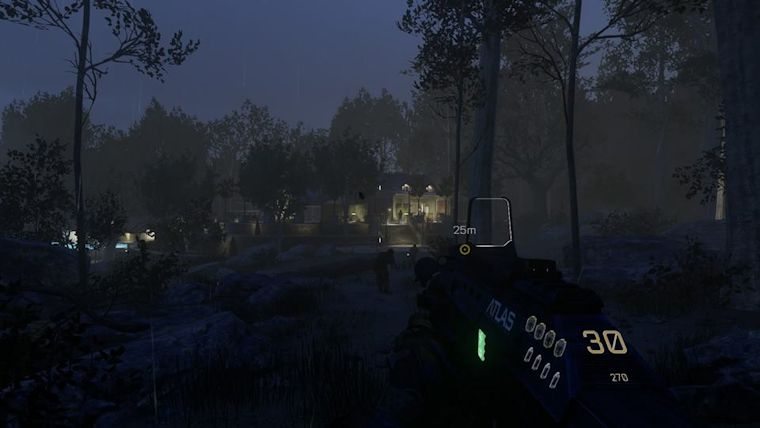 The game will prompt you to deploy your Assault Drone by pressing left on the D-Pad, so do so immediately. Kill as many enemies as you can with the drone. If it is destroyed before you can do so, finish the rest off yourself.

Follow Gideon down the same path you went before and jump into the vehicle without having to fight any enemies prior. Get the president inside and after the vehicle drops off, you will have to fight one more wave of enemies.

Very quickly, the game will prompt you to activate your shield by pressing down on the D-Pad. Take down the drones with EMP grenades and you can finish the rest in whatever way you wish. With the shield, you can even go up to some and melee them. Once everyone is defeated, head towards the Warbird that has now flown in to extract your team to end the second level of Call of Duty: Advanced Warfare.