Crusader Kings 3 – How Do Claims Work, What is De Jure

If you plan to expand your realm, you'll need claims. 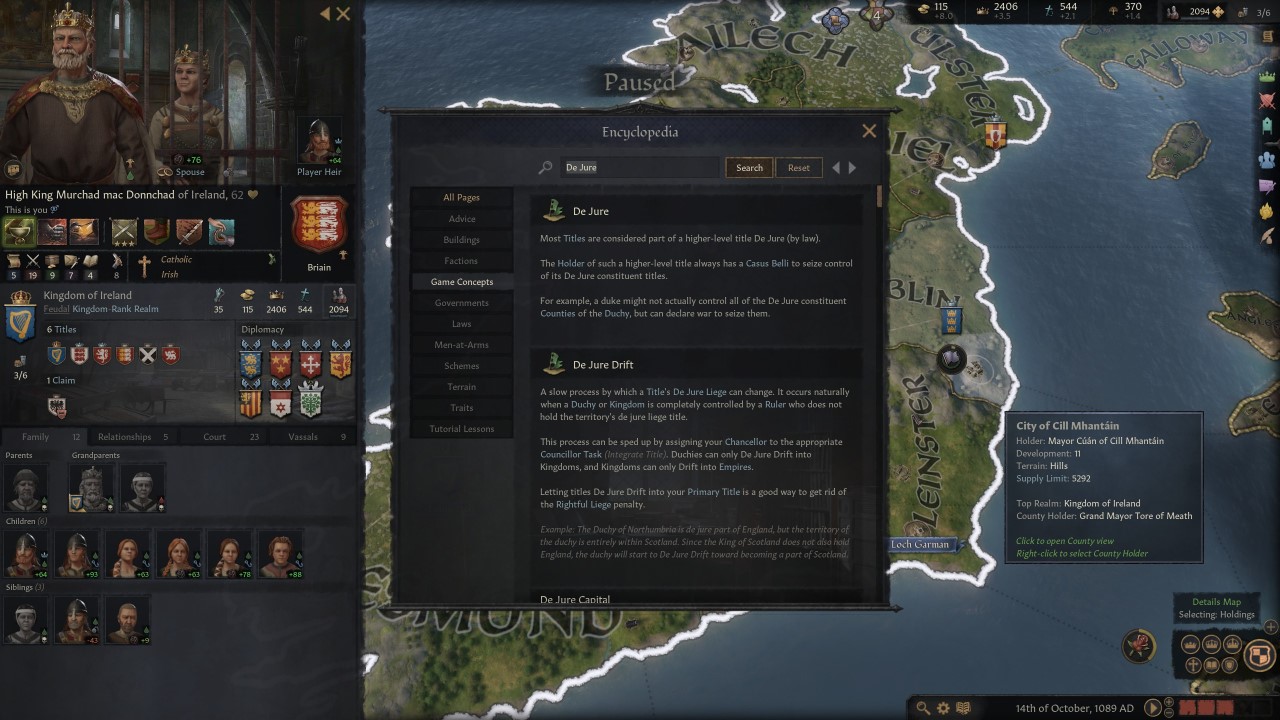 Controlling and seizing territory is a big deal in Crusader Kings 3, and there are many ways to stake your claim on a desirable slice of real estate, such as De Jure claims. Claims are perhaps both the simplest and most confusing aspect for new players to wrap their heads around, yet with this guide the concept will go from somewhat opaque to clear as mud. Wait . . . .

Crusader Kings 3 Claims and De Jure Claims are land titles you have a right to.

In Crusader Kings 3 you need to have a valid claim towards a given piece of land before you can take it for yourself. Claims can come from relations (Implicit Claims are claims that eligible children possess due to their parents’ owning the appropriate titles), via your realm chaplain and their “Fabricate Claim on County” ability, and most critically De Jure.

So, what exactly is De Jure? Land and titles in Crusader Kings 3 follow a hierarchy, and from smallest to largest these are Baronies, Counties, Duchies, Kingdoms, and finally Empires. What does that mean for you and titles? Well, think of it this way: a select amount of counties make up a duchy, and if you own the title for that duchy you have a De Jure claim on any counties within it you do not personally own. I.E. If you own the duchy title, but only two of the three county titles, you have a De Jure claim on the third and can legally go to war for it. You can see what falls under what via the Duchy, Kingdom, and Empire map toggles in the bottom right of the HUD, near the date and game speed.

Additionally, there is a thing called De Jure Drift. Wait, what!? Don’t worry, it’s not as complex as it sounds. Say I own a duchy that falls under the Kingdom of Scotland. I won’t be viewed as the rightful liege by my vassals there, but over time that duchy will convert into a Kingdom of Ireland duchy, removing England’s De Jure claim on it. This can take a hundred years, so it’s gonna take some work to keep it under your banner (though your Chancellor has an ability that’ll speed this process up), but once it become De Jure a part of your kingdom, England loses their ability to claim it and go to war with you over it. Drift only applies to duchies and kingdoms, so you won’t see counties or baronies affected by this. About war: claims of any sort provide you a casus belli (cause for war) over the associated title in Crusader Kings 3. If you have a courtier with a handful of claims you can legally go to war on their behalf, and can in effect add that land to your ruler’s domain after you take it and they become your vassal (vassals are lower tier rulers who help you manage your realm, and if you’re their liege their land counts towards your domain without you having to own the title). Things can get a little sticky when succession and inheritance kicks in, but the basics of claims are bone simple: if you or someone in your court has a claim you can wage war over that land, with the sole exception being baronies (they swing with their county).

As for Pressed claims: they’re legally stronger, so they can be inherited by eligible children. These are great for acquiring titles later down the line, such as when you transfer over to your heir upon your ruler’s death, but remember other characters take advantage of this system in Crusader Kings 3 as well (so, some murder may be in order if you want to minimize the competition). Then again, you can also arrange marriages and recruit claimants into your court to explicitly grab claims for yourself, so don’t be afraid to take advantage of another character’s line of succession.

Home / Game Guides / Crusader Kings 3 – How Do Claims Work, What is De Jure