Dead Rising 4 Guide: Where To Find Every Combo Vehicle Blueprint 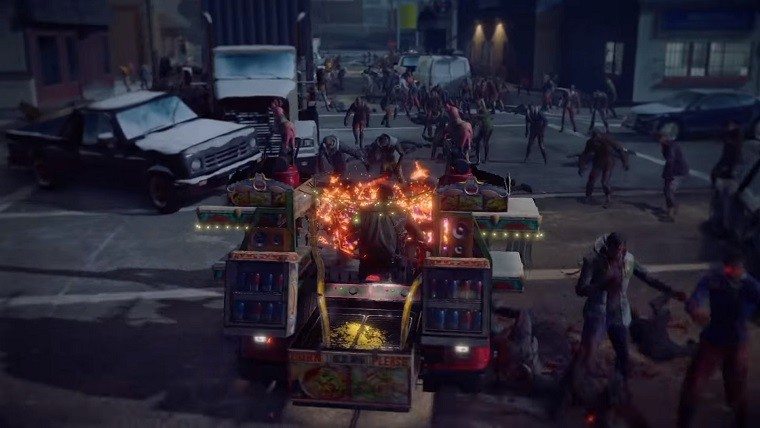 While there are certainly a lot of combo weapons to play around with in the world of Dead Rising 4, the game is no slouch when it comes to offering combo vehicles, either. While running over a crowd of zombies is all good fun, the game has some absolutely ridiculous vehicle combinations that have to be seen to be believed. This guide will help you find every vehicle combination so you can take your next zombie-killing road trip in style.

Kill-O-Watt: You’ll find your first combo vehicle blueprint very early on in the game, as you’ll spot it near the go-kart track in the Willamette mall. You will have to take part in the go-kart challenge first, which will have you racing around the zombie-filled track twice while trying to beat the record time. If you manage to do that then the big cage will open up, which contains the blueprint.

Bogey Monster: The next blueprint is located in the Homerunners store in the Willamette mall, which you can find in the Caribbean Cove section of the mall. You’ll find the blueprint inside sitting on the counter.

MowerHawg: Ye Olde Toybox in Medieval Town of Willamette Mall is the home of the next blueprint, which will be waiting for you on the counter.

Warmonger: You’ll find the next blueprint as you progress the story, which will be in Case 2 as you leave Willamette mall for the first time. There will be a point where you’re in a garage and Jessa will be standing near a vehicle, and the blueprint will be on the hood of the vehicle.

Creep Fryer: Head for the Glitter Dolls Nightclub in North Peak, and then go to the back of the building. You’ll spot the Zom-B Panic Room key on the back steps of the club, so grab them then head inside and go downstairs. The entrance to the panic room will be near the bathrooms, so use the key and pick up the blueprint on one of the beds.

Sling Riot: This blueprint can be found to the south of Old Town in the chapel. You’ll find it below the area’s emergency shelter, waiting at the top of a small set of stairs.

Cryonic Commando: You’ll need to go north of West Ridge to find the next blueprint, which will be inside of a barn. You’ll know you have the right barn when you see one with Santa and his reindeer on the roof, with the blueprint itself being on a stack of hay in one of the corners.

Tread Maker: This blueprint is found towards the end of the game, which will be in Hudson’s Dairy Farm in Tom’s house. During the story in case 5 you will have to open a closet and use the Spectrum Analyzer to find a secret room, and inside the secret room will be the Farm Keys. Use these keys to open the garage at the front of the house, and the blueprint will be found inside on a shelf.