Destiny Multiplayer Tips for The Crucible 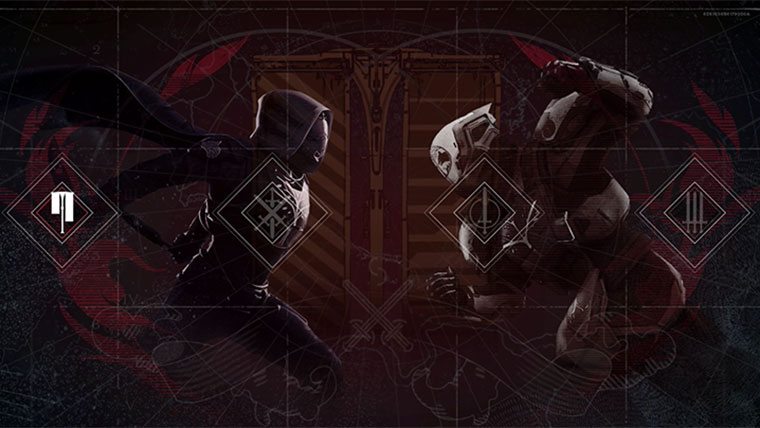 As the developers of one of, if not the, most popular first person multiplayer games in the last decade in Halo, multiplayer PvP plays a big role in their latest game Destiny. While it’s not all there is to see in the game, Destiny’s Crucible Mode is every bit as engaging as the single player and cooperative elements of the game.

Where Destiny has players focused on building a character, earning unlockable skills and rare loot, the game allows players to take this content into an online arena known as The Crucible, where players can play a smattering of mutliplayer gamemodes.

Here are our tips for The Crucible Multiplayer in Destiny.

How to unlock The Crucible 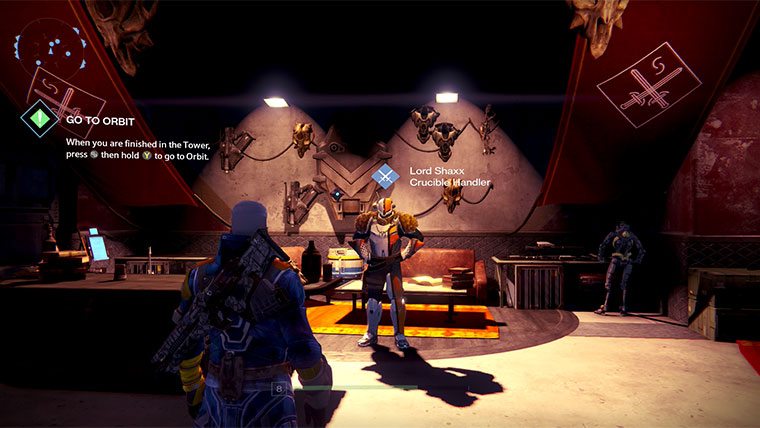 First things first, you’ll need to play a fair amount of Destiny’s single player, story mode, or cooperative offerings before you head into The Crucible. You’ll have to level your character to Level 5, which means you’ll need to make your way through some of the early content, unlocking some weapons and gear for your character in the process.

Once you do hit Level 5, you’ll need to head to The Tower. There, you’ll want to speak with Lord Shaxx, who will give you an invitation to participate in Crucible matches, from then on, you’ll be able to access multiplayer at any time that you decide to use the “Set Destination” feature in the game.

Lord Shaxx can also outfit you with gear for the Crucible, but only once you reach level 20. Once you do, you’ll be able to earn and use Crucible marks which can purchase high-end gear for your character.

Entering the Crucible for the First Time 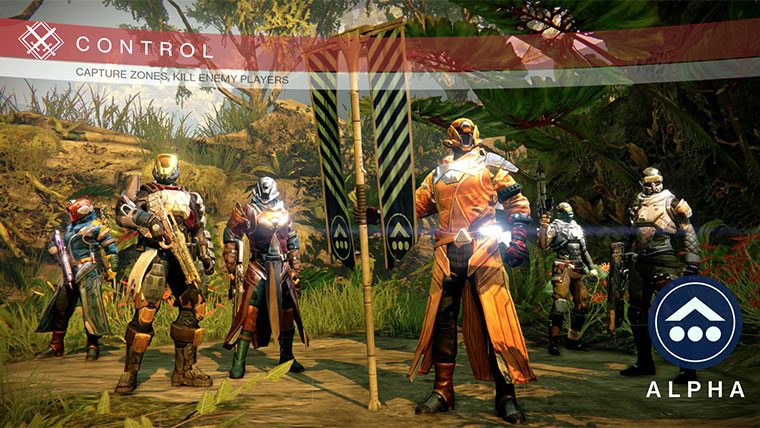 Heading into the Crucible for the first time, you’ll only have one game mode available to you. Control is a six vs. six capture and hold, domination style mode. To unlock new modes in the Crucible, you’ll need to complete matches on each different mode. Simply play a match of Control and the next mode will open for you.

You’ll also notice that all of your gear and weapons come with you into the Crucible. Bungie has confirmed that they have leveled the damage input and output for Crucible players, regardless of weapons that are brought into the mode.

While high level weapons may have standard damage in Crucible Multiplayer there’s a lot of ways to separate yourself from the crowd in these modes. Each player can carry a number of different weapon types. Long range assault rifles with Auto, Burst, and Single Shot capability. You’ll find some players using shotguns or hand cannons which do more damage per shot. You’ll also encounter energy weapons and sniper rifles as well.

Bungie might have made its name with the Halo games, but they’ve really gone away from that formula with Destiny. Instead of weapons being the main control points on maps, now the game revolves around ammunition more than anything else. Ammo crates can be found strewn across the Crucible levels and any time they are opened they can be shared with other players who are in proximity. Learning the locations for these ammo drops, especially for the all important Heavy drops can be very helpful in winning a match in the Crucible on any mode. 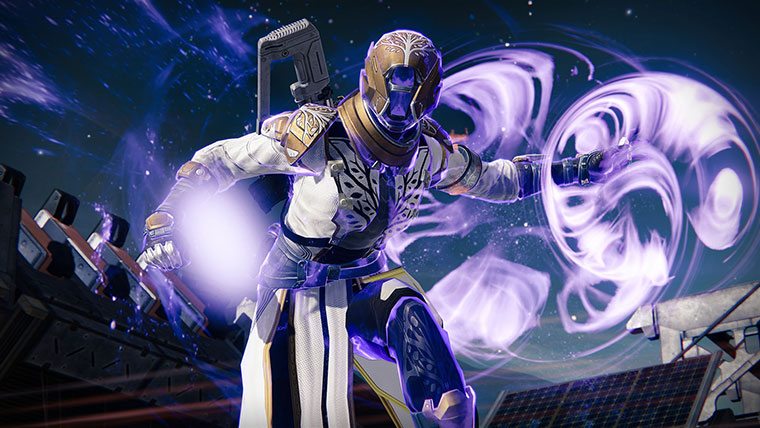 Players are going to want to use Super Powers at key moments as they are extremely powerful in taking down enemies. Regardless of the class, each Guardian has a special ability. The Hunter has can be a killing machine with the Gunslinger ability. While the Titan can slam the ground with force taking down multiple enemies at once. Know your class, and what your special ability does to rack up kills, assists, or clear out control points. Super abilities are on a cool down, so you’ll need to use them wisely. These abilities will charge more quickly as you perform in-game actions. The more kills, assists, orbs collected, or capture/defends you get, the faster the recharge will occur.

Like any domination style mode, the objective is to grab all three zones if you can.  Though a highly contested battle could have you trying to control 2 out of 3 as an all out push could spread your team to thinly.  Alongside the aforementioned scoring, ammunition drops are scattered throughout the map, as well as periodic heavy ammo drops during the match.

This is the mode available in Crucible Mode from the start, and must be played to unlock the next mode.

Classh is a six on six Team Deathmatch mode.  There are no bonus points like in control, instead, players tend to gravitate towards critical points on the map that play host to ammo crate drops.  These ammo caches will keep you stocked up on regular, special, and heavy ammunition, earning you a massive advantage with heavy weapon abilties like Rocket Launchers.

Rumble is Destiny’s Free for All Deathmatch Mode.  It features six player combat to the death

Skirmish is a three on three Team Deathmatch mode with an added caveat.  These three man teams can revive fallen teammates, and earn bonus points for doing so.  Skirmish is an interesting game mode because of the added revival aspect.  With only three players per team, it’s paramount that all three players stick together and  work to put the other team at a disadvantage.

Salvage is Team Deathmatch with an objective twist.  Players will seek out relics and then look to take them back their ship for points.  Players will need to set up a probe and activate a transmission to score.  The opposing team can also interrupt this transmission process and score points for themselves.  The match goes to 10,000 points or time. 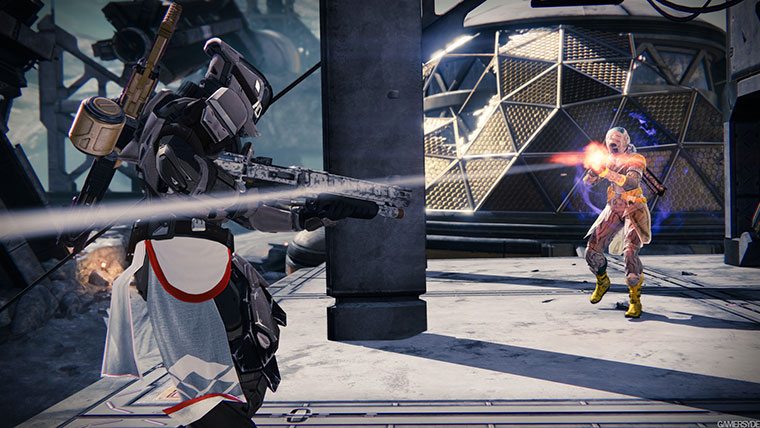 Stay on the Move! Destiny Multiplayer was obviously designed to keep players moving when you take into consideration that you always show up on the map.

Use your hovering jump ability to gain advantageous positions when confronting an enemy head on.

If your current weapon isn’t working, try another one. You can access all of your weapons at any time, just hit the character screen and switch weapons at any time during a match. Use a weapon that fits your play style. If you’re having trouble with the Rifle classes, try a close range weapon like a shotgun that requires a little less accuracy in tight quarters.

Keep an eye on your Super Ability meter at all times. Regardless of character, popping your Super Ability can get you out of jam in almost any situation. While we advise to use this at the optimal times in most cases, we’ve found that it can work in panic situations as well, especially with the Titan or Warlock.  There are also special abilities that will allow you to control portions of the map, depending on the character.  Using well placed shields and force fields can allow you to hold down control points or other strategic spots on the map, depending on the game mode.

Group Up. Destiny is definitely a different game than Halo, but one thing remains constant, two guns are better than one. Two guardians will almost always take down a single lone wolf.