Dreams – How to Remix Creations

Almost everything can be remixed, but there are limitations. As we noted in our review, Dreams for PS4 is a game that heavily relies on collaboration between players and the remixing of assets and creations. Many people have great ideas they want to create, but they want to use other creations as tools or even a starting point. Dreams doesn’t make the remix concept incredibly clear, so this guide will walk you through exactly how to remix other creations and use them in your own creations.

How to Remix in Dreams

To remix in Dreams, all you have to do is press the remix button next to the play and thumbs up buttons. You’ll immediately enter the editor and be able to make changes and explore the inner workings of whatever you just remixed. The confusing part about remixing in Dreams, however, is that this button is not always there. To understand why, we need to break down what each category of creation in Dreams is. 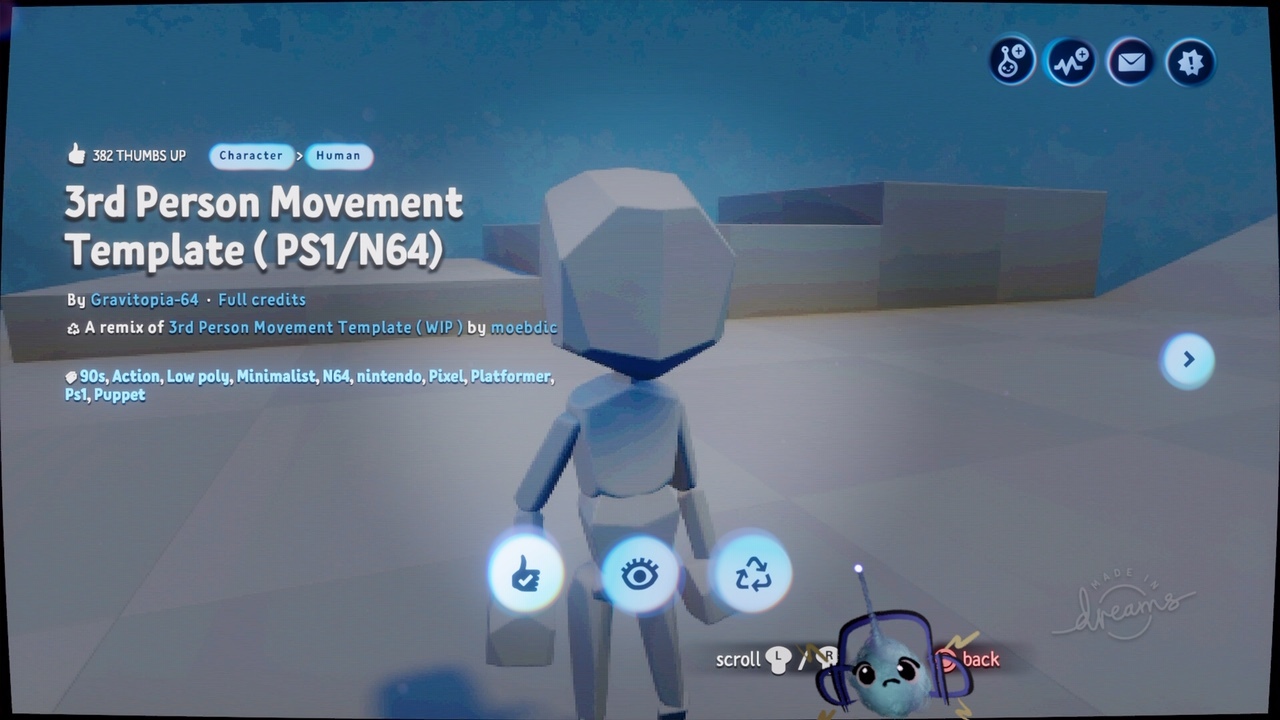 Creations in Dreams come in three categories. Elements are the smallest category, consisting of singular items like a lamp or a chair. An element is just one thing, just one model, just one sound effect, just one song, and nothing more. Scenes are the next step up, consisting of a group of elements joined together to create a larger space. Scenes are made up of smaller elements, and some examples of scenes are level 1 of a game, one scene in a short film, or a still life art piece. Dreams are the largest form of creation. All a dream is is a map of scenes that denotes the order in which they are played. It’s a string that connects several levels of a game, for example, or several scenes in a short film. There are Collections too, denoted by a dotted circle, but those are simply groups of elements, scenes, and dreams curated and organized by another player.

So to recap, the hierarchy of creations is Element < Scene < Dream. You can tell which is which by looking at the shape of the published creation. Hexagons are elements, circles are scenes, and rectangles are dreams. Only published dreams show up in Dream Surfing, while everything is fair game for Dream Shaping. Only elements and scenes are able to be remixed. Full dreams cannot be remixed, although their individual scenes can be if the author allows so.

To put this in perspective, you wouldn’t be able to remix the entirety of Super Mario 64 (Dream), but you would be able to remix Bob-Omb Battlefield (Scene) and the goombas (Elements). Even then, a creator can choose to make their scene non-remixable, such as if an artist wanted to protect their still life piece, but all elements are required to be remixable no matter what. If you see a single model, a piece of music, or a bit of logic that you really like, you can use it.

Hopefully, this guide clears up the remix mechanic in Dreams for PS4 somewhat. It’s still a confusing system and it’s not explained very well in-game, but this seems to be the overall gist of how it works.