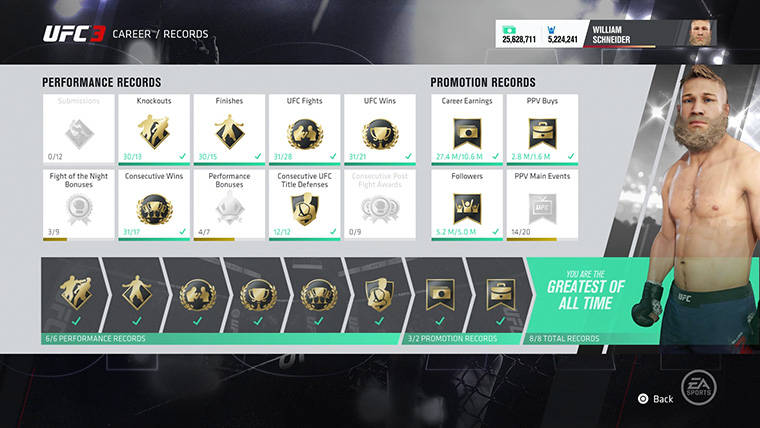 Career Mode has been revamped in UFC 3. This time around, you’ll be looking to do the whole Conor Mccgregor thing and win two belts, but if you want to retire as the G.O.A.T. there are challenges that you need to complete along the way.

To beat Career Mode in UFC you’ll need to fight your way through multiple stages where you’ll fight a fixed number of opponents at which point, if victorious, you’ll square off against a “Rival” opponent to progress to the next level.

As you progress, you’ll gain access to new gyms which unlock new fighting abilities, as well as perks that can be slotted into five different slots. Depending on what type of fighter you choose to create and what you want their skill-set to be, you’ll select the gym that corresponds with your style.

Once you’ve become the champion of your weight division you’ll then find another challenge unlocked to try and hold two belts simultaneously. Once this is completed, the only thing left to do is to finish any of the G.O.A.T. challenges that you have left. Depending on how you played the game up to that point will determine how much longer the game lasts.

Once you’ve completed the challenges, you have the ability to either retire on top, or keep fighting.