Fallout 4 Guide: Where to find the Fat Man Mini-Nuke Launcher By far the best weapon in the Fallout series, aside from the ridiculous mini-nuke shotgun, is the Fat Man mini-nuke launcher. Unlike its over-the-top cousin, this weapon is actually pretty useful, firing just one of the extremely powerful explosives. The Fat Man returns in Fallout 4, but you’ll have to find one to use it. There are a few scattered around the map, giving you multiple options for how to get it. However, the one I detail below is definitely my preferred method, as it has a few advantages over others.

In a tiny outpost, near the top of the map, you’ll find the elusive weapon that every Fallout 4 players wants to have, but will only use when they have a definite save to load if things go wrong. Outpost Zimonja, found right near the middle of the map, just northeast of Tenpines Bluff (which you should encounter during the Minutemen mission chain), houses a Fat Man. The raider who holds it, appropriately called Boomer, is a tough foe however. 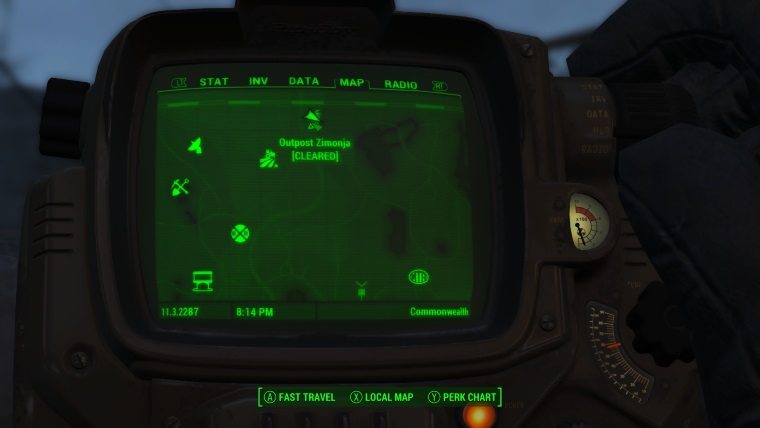 Sneaking up is probably the best option, but there are about four raiders within the outpost, along with an auto-turret on the southeast side. Ultimately I found Boomer too powerful to take down in just a couple of shots, so a full assault seemed more appropriate. Grenades were my best friend, and they likely will be yours. Tossing one, two, or even three at Boomer should take him down, or at least get him to a manageable level.

The key though, is to avoid his mini-nuke shot, as he has one prepped to fire as soon as you arrive. If you can kill him first, you’ll gain a new mini-nuke along with your Fat Man, but the more likely scenario has you dodging it in some way, then taking him out. Once you kill him you can scavenge for the Fat Man mini-nuke launcher, along with some pieces of Power Armor.

I find this method of gaining a Fat Man the most effective because you can take it on at a relatively low level; I originally did it around level 10. Also, it is near Sanctuary, so you can just walk there after some rest and a full restock of weapons. It also yields the extra Power Armor pieces, so that can help near the beginning of the game. Finally, killing all of the raiders at Outpost Zimonja will net you another settlement to manage.

If, however, you find this too tough a task, there is another option. Hidden in the main storyline is a Fat Man to be found. It’s in the mission that takes you to Fort Hagen to confront the man that kidnapped your son. Deep in the basement you’ll find an armory, the code to this door is found in a red hallway down some stairs nearby. Once inside the armory there is another locked door. Pick the lock and you’ll find a Fat Man.