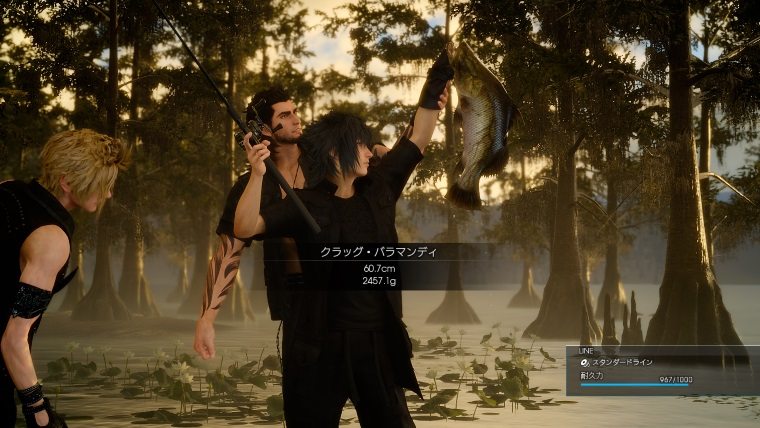 Final Fantasy is a massive, sprawling adventure through a magical new land. And yet, the thing that many gamers are spending their time doing is something they could do in the real world: fishing. This isn’t a new phenomenon. Video games have had fishing modes since long ago, and I spent a good chunk of time catching fish in Ocarina of Time, letting the forces of Ganondorf run rampant while I tried to snag the biggest fish I could. For those new to the game though, many are confused by the process. So here’s a quick guide on how to fish in Final Fantasy XV.

Luckily, like my personal favorite of Ocarina of Time, fishing in Final Fantasy XV is pretty simple. It has its depths (hehe), but you don’t need to dive too deep into them to just have some fun (yay fishing puns!). Anyway, first things first, you need to be at a designated fishing area in order to be able to fish. These will show up as a fish symbol on your mini-map, so head to them when you’re ready. There should be a board nearby that you can interact with to see what you might catch at the spot.

If there’s a bait shop nearby you probably want to head there and grab bait or lures specific to the types of fish that are available to catch at this spot. One you have that you are all set to go fishing in Final Fantasy XV. Head to the end of the pier (it’s usually a pier, but whatever spot has the fish on the minimap) and press A on Xbox One or X on PS4 to start fishing.

Be sure to select the line and lure that you want to use in this spot on the menu that appears. Now you should be able to choose a location to cast to. Look on your minimap to see where fish appear, they should show up as dots. Pick one of these spots and cast your line.

Now you need to get the fish to bite. Use the left analog stick to flick your lure around, enticing the fish without scaring them away by thrashing it too much. Press down the right trigger to reel the line in a bit if you don’t get any attention where you are, taking things slow the whole way. If nothing bites, just reel the line in and find a new place to cast. Once they do bite the fun really begins.

Well, maybe it’s not so fun. It’s actually pretty simple. You just want to hold the right trigger (R2 on PS4) to reel the line in. Make sure you follow the on-screen prompts for where to direct the line, using the left analog stick. Do this well enough and you’ll pull the fish in in no time.