For Honor – How to Master the Pirate Hero

For Honor's Newest Pirate Hero Enters With a Bang! For Honor has given us a new Pirate Hero to embark with into their 6th season of online supported gameplay; Year 6 Season 1.

This year has already brought us a ton of new content including a new group of Heroes known as the “Outlanders.” Joining this group as the first deployed hero of the year is the “Pirate,” a female scallywag that fights like a true deviant of the seas. While the pirate is far from the most complicated character released in For Honor there is certainly an ideal build and playstyle that you should adhere to. While my Pirate is only a one prestige character at the day of launch my other 101 prestige’s can speak to my experience and available For Honor knowledge to help start you on the path to Pirate mastery.

For those For Honor fans who care about the lore here is a nice quote about the pirate’s entrance into the epic fighting game.

The people of Heathmoor were afflicted with rising waters and a devastating storm that flooded the landscape. Thankfully, the storm passed, and though the skies began to clear, a cold winter settled in. The high waters froze, and snow covered the terrain. Ships were stuck in the ice, which only added to the odd serenity that had befallen Heathmoor.

After so many hardships, so many battles and natural catastrophes, the people took this small respite as an opportunity to reconnect. After being separated for so long, friends and families were reunited once again, and everyone took the time to count their blessings, and celebrate. But amid the festivities, something unforeseen came from the frozen sea. A large ship with red sails reached the harbor, the herald of uncertainty – and intrigue.

The Pirate Hero is a solid addition to the For Honor franchise, and unlike the past few new heroes has not “broken” the game upon release. The Warmonger had a broken poison ability, and the Griffon was just an unstoppable ninja like tank. However, more relatable to the last added hero, Kyoshin, the pirate revolves around a very simple mechanic which is her grab/breaker. Following every heavy attack that the Pirate dishes out she can then grab her enemy and stylishly shoot them with her side arm flintlock. This ability is so versatile as it’s only very easy to pull off as there are no long-winded prerequisite moves. That said, aside from this grab ability, there are not a ton of built-in combinations for her.

Her specialties are as follows: 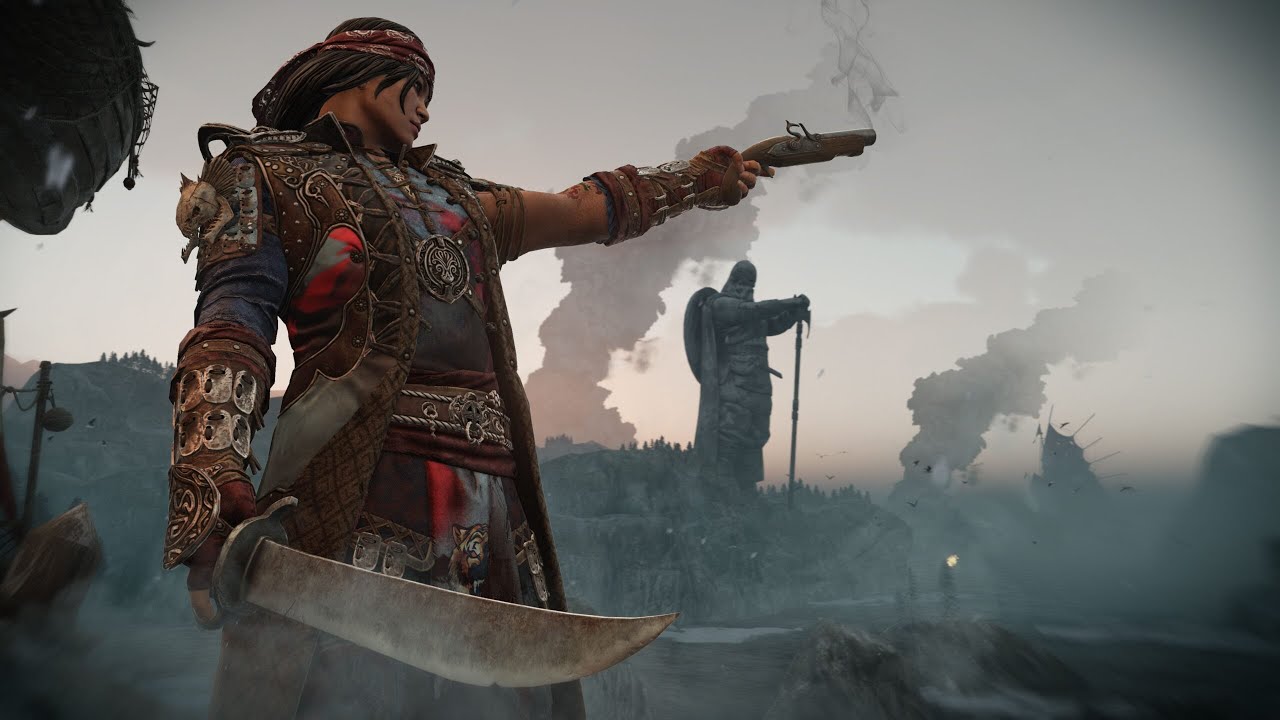 Her unique abilities or “feats” are as follows:

My early experience with these feats is that they are not nearly as good as I was expecting them to be. THIS IS A GOOD THING. The Warmonger taught us how insanely annoying an overpowered ability could be. Armor Piercing Slug is a good first tier, but in all honesty other than interrupting your opponent’s rhythm it does not do any noteworthy damage. None of the other first feats are worth replacing this one though. Pocket Bomb is a great second tier and I would certainly keep this one attached to your pirate. It has a quick cast time, the animation is dope, and it does solid damage for a tier 2 bomb.

Trick Shot is my current least favorite ability and I hope it sees a buff in the near future. First of all it barely does any damage for a tier 3 ability, hardly doing any more damage than Armor Piercing Slug. On top of that, she has no bleed capitalizations like the Shaman, so other than usual overtime bleed damage, it is not overly useful. I personally think Tough as Nails is a better ability. Finally, Gunpowder Surprise is a great Tier 4 ability, it is far from overpowered, but does all the damage you expect it to, great animation to the gun, and it’s knock down really helps get the jump on your enemies.

My ideal loadout would be as follows

The Pirate is mostly built up of a handful of chain attacks but has the ability to cancel out of almost all attacks and change directions. She also has a solid step back if you hit the dodge action once with no directions given. Sadly, we can already see a lot of spammers taking advantage of this, but most experienced players will parry this into oblivion as time goes on. That said the best way to play as the pirate is change up combos constantly, have a string of three or four you can memorize and stick to those. The best thing about this is that you will quickly learn how easily you can cancel out of these attacks/combos and spin into a different one.

Another great aspect of the Pirate’s fighting style is when you miss a heavy attack whether your depth perception is off or your opponent dodges, you can perform an instant grab shoot to close the gap. She has easy to pull off unlockables’ that should certainly be utilized, and again, CANCEL ATTACKS! When you see that your enemy see’s your unlockable is coming, cancel out of the attack and do a light one from the opposite direction. The Pirate is refined but spazzy so use this to your advantage and stay on your toes throughout battle.

This has been my breakdown of the Pirate and what she brings to the longtime bloody For Honor war table. I hope this helps you jump on deck with both feet and take down even the strongest of Samurai, Knights, and Vikings.