Genshin Impact 2.8: Where to Find All Floating Jellyfishes

Making Sense of All the Floating Jellyfishes Puzzles and Their Locations. Players may have encountered some Floating Jellyfishes while exploring the numerous islands of the Golden Apple Archipelago in Genshin Impact. Those Floating Jellyfish are referred to officially as Cloudleisure Steps. They are essentially a short course triggered whenever the player steps on the first floating platform. After a player has successfully stepped on every floating program and reached the end of the track, they are rewarded with a treasure chest for their efforts. This guide intends to highlight the starting location of every course.

The Location of All Floating Jellyfishes in Genshin Impact

Players can discover a total of 10 floating jellyfishes in the waters of the Golden Apple Archipelago. Nine of them can be tackled at any point during a player’s adventures on the islands, while one of them is locked behind a world quest that is only obtainable after completing all of the event-related domains in patch 2.8. Here is a map indicating the positions where those jellyfishes can be found on the map: 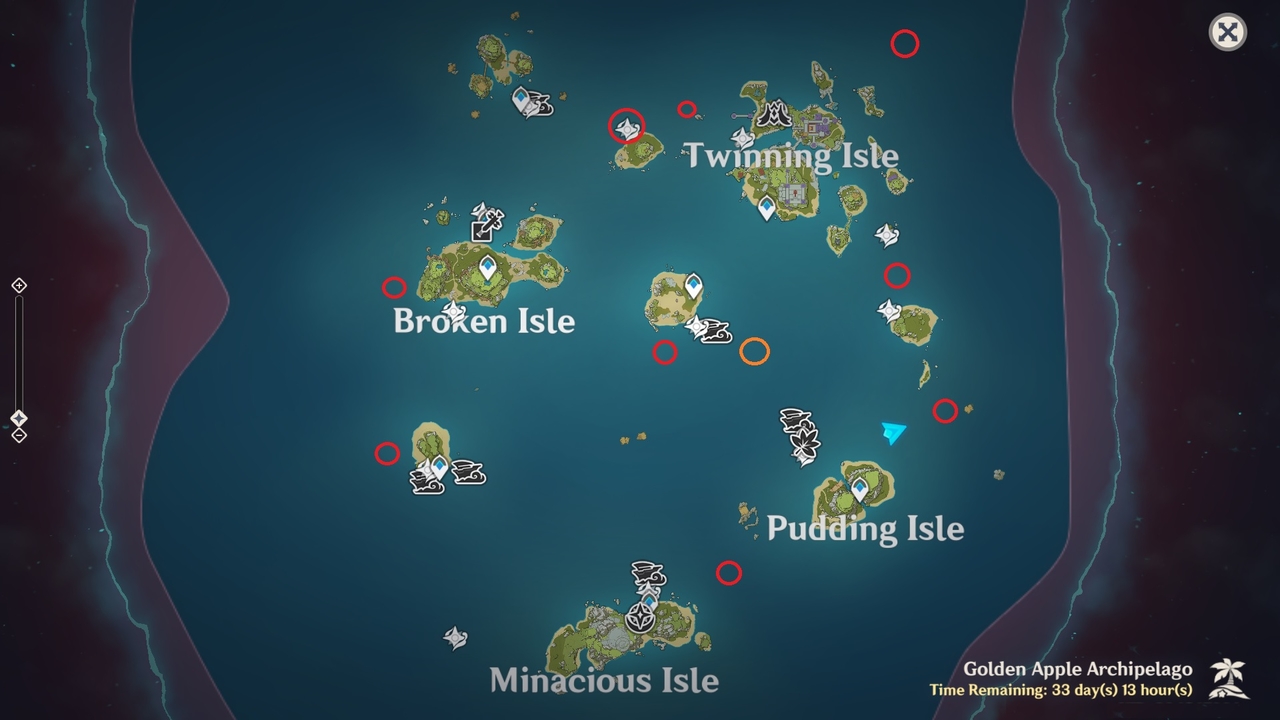 Red circles marks where all the normal jellyfishes can be found, while the orange circle marks the location where the player can find the world quest-related jellyfish. This jellyfish will only spawn in the open world after completing all the prerequisites steps needed for the world quest. Players can double-check whether or not they’ve done a jellyfish puzzle by checking if it’s dim or bright. A bright jellyfish that doesn’t spawn any other jellyfish near it after being jumped on means the player’s already done it.

The Treasure of the Four Skerries World Quest is the quest that eventually spawns the floating jellyfish in the middle of the map, but to make it to that point requires a lot of work beforehand. Players will want to visit each skerry in the corners of the map of the Golden Apple Archipelago and will need to collect the treasure chest from all skerries to complete a treasure map that will spawn the final chest. The positions of the skerries and chests are as shown below: 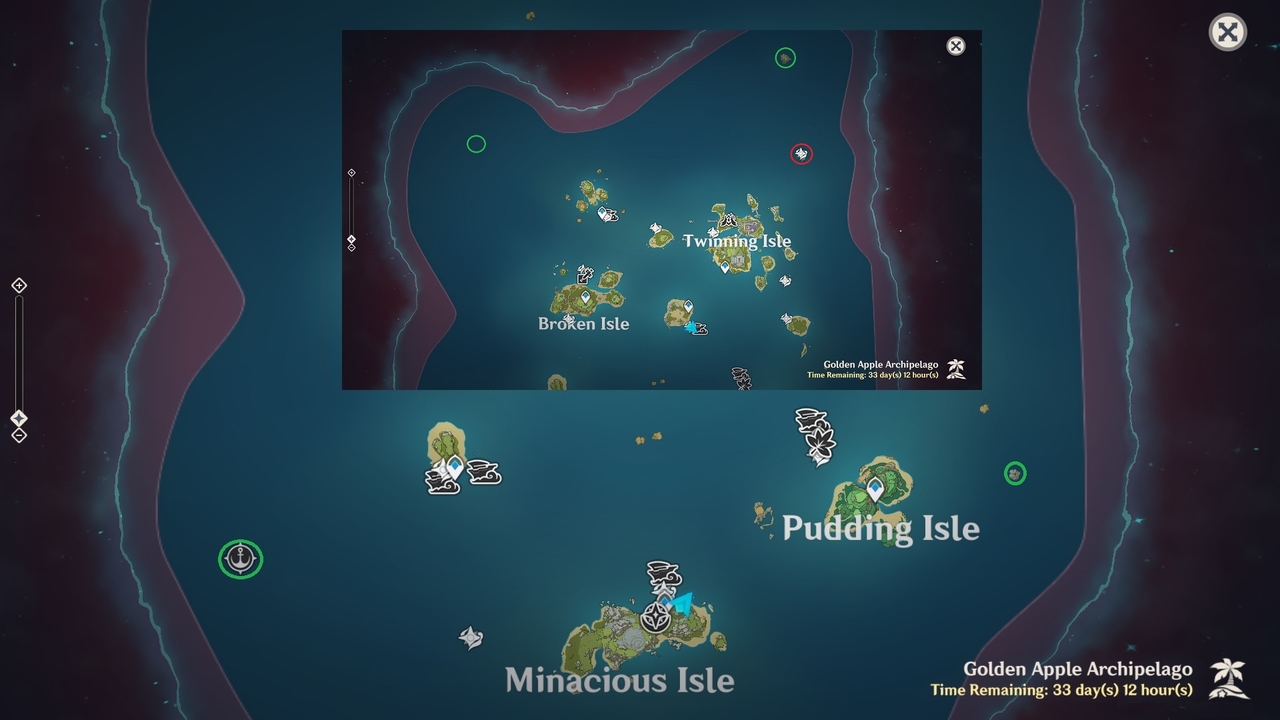 Green Circle marks where the skerries are, while the red circle marks the beginning location to get to specific skerries. Here is a summary of the steps required for each skerry, except for the one related to the Pudding Isles, which requires more steps than the others:

Skerry to the East of the Pudding Isle:

Sail to the position on the map and collect the chest after defeating the nearby slimes. The logs in the chest instruct the player to head towards the Pudding Isle to find the treasure clue. Switch both sides of the Bonsai to Hoverlight Rocks, and visit the Pudding Isle. Head to the south side of the right half of the island. Walk alongside the shoreline and the player should be able to quickly identify a red maple tree where they can dig up the next set of instructions. It requires the player to head back to the Bonsai and change the right side to Unyielding Rocks. 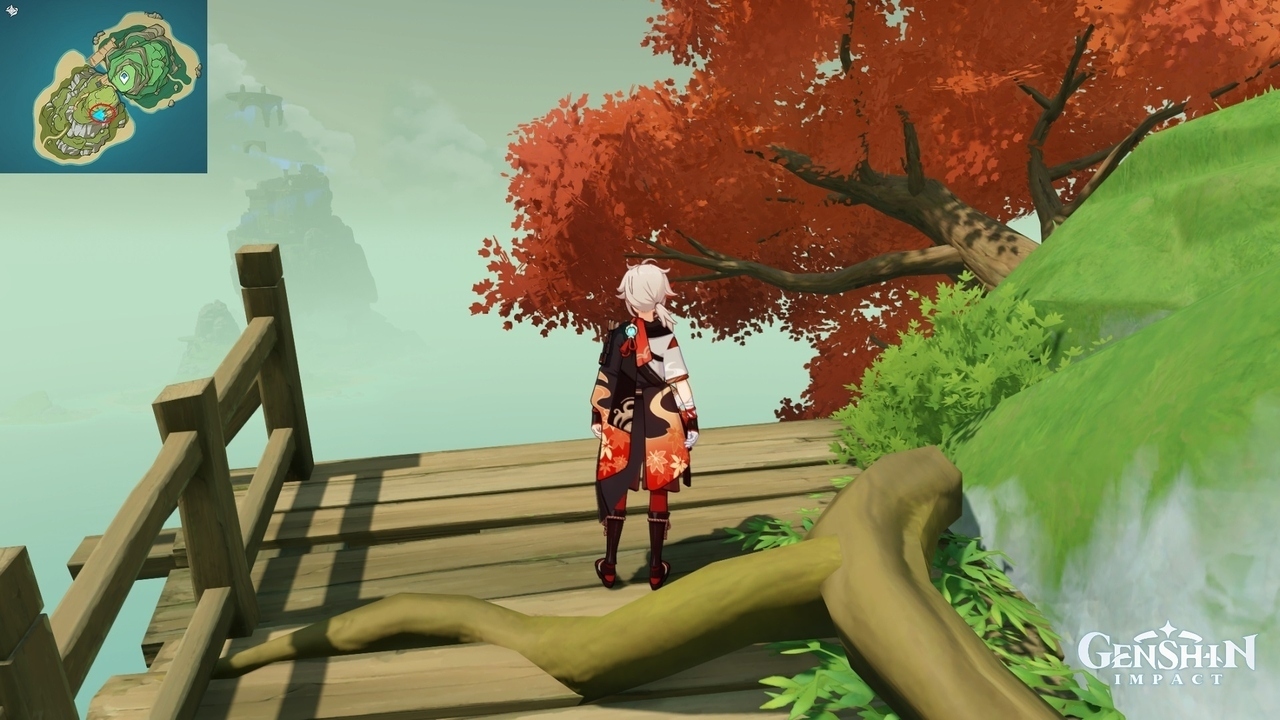 Head from the Pudding Isle Waypoint to the left side of the Isle, look for a red maple tree near some ascending wooden planks, interact with the glimmering object and the player should be able to obtain the last treasure clue, which will complete the treasure map and spawn the world quest related jellyfish.

Head southeast from the middle island waypoint with a Waverider until you see a series of whirlpools in the open water with a bubble in the middle. Interact with the water bubble to trigger the jellyfish. Complete the course to grab the Luxurious chest at the end while also ending the Treasure of the Four Skerries World Quest.

This is everything relating to the floating jellyfishes in patch 2.8 of Genshin Impact. For players looking to get more acquainted with the islands and people of Golden Apple Archipelago, they are free to take some time to visit the local theatre or to gather conches for some easy Primogems and a character skin.

Attack of the Fanboy / GAME GUIDES / Genshin Impact 2.8: Where to Find All Floating Jellyfishes