The latest news in the world of video games at Attack of the Fanboy
October 26th, 2015 by William Schwartz 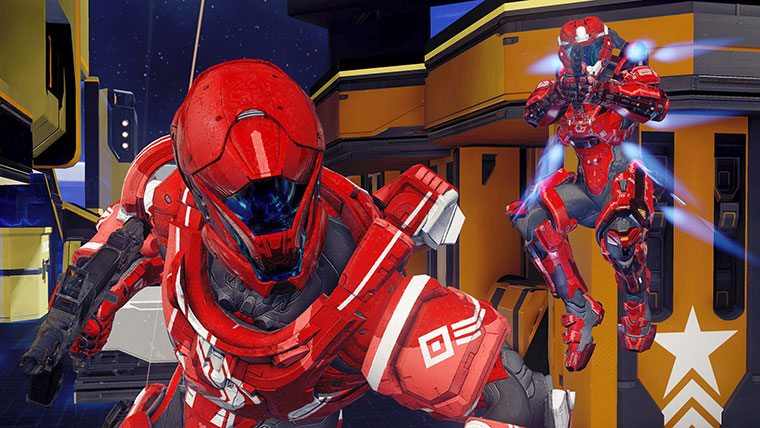 Halo 5 Guardians features the return of the popular Arena mode from previous Halo games that features a wide variety of game types in a four versus four setting.  Hyper-competitive and fast-paced Halo has traditionally required players to work together as team for success, and Halo 5 Guardians is no different.  Regardless of whether you’re playing by yourself with a group of random Xbox Live players or playing with a fireteam of your own, these tips will help you do well in Halo 5’s Arena Multiplayer Mode.

Team Slayer – Team Slayer is a team deathmatch mode in Halo 5: Guardians.  Team Slayer in Halo 5 has changed a lot because weapon spawns are now public knowledge.  Instead of needing to commit weapon locations and spawn timings to memory, players will now be notified where power weapons are and when they will become available.  This knowledge is half the battle as controlling the weapon spawn locations are as important to knowing where and when they’ll spawn.

Good Team Slayer teams will be gearing up to control the power weapon areas as the countdown timer approaches zero.  Rocket launchers, sniper rifles, and other power weapons can give your team a huge advantage in any battle.

Team Slayer is still a mode where two guns will trump one, and two players patrolling the map can easily wipe out players taking the lone wolf approach.  Partner up with players on your team, and if you’re not using a mic or find yourself by yourself more often than not, just follow someone else, this will allow you poach kills or clean up a weakened enemy.

Grenades also play a large role in Team Slayer and can set the table for quick kill with your primary and secondary weapons if used correctly.  While a well placed grenade will kill a player, splash damage from a grenade can weaken them, popping their shields so that one or two shots will finish them off.

You have to be careful though, grenades can also weaken your teammates if they are caught in the blast radius.

SWAT – SWAT is Halo’s hardcore team deathmatch mode and enemies will go down much quicker than they do in Slayer, especially if you hit them in the head.  SWAT rewards more patient gameplay and you can afford to straggle away from your team a little more often.  As in any gamemode teamwork still trumps lone wolves but a solo player can more easily take out multiple enemies due to the quicker time to kill.

In SWAT you won’t need to deal with grenades, nor will you need to deal with power weapons or their spawns.  You will however want to keep an eye on spawn changes for the enemy.  Knowing where your enemies are coming from will give you a big advantage in lining up a few easy headshots as they round corners and expose themselves.

Capture The Flag – Capture the Flag has always been a popular mode in Halo games and it returns to Halo 5 in Arena Mode.  This game mode arguably takes the most cooperation from your team as you must infiltrate the enemy base and steal their flag and then make it back to your base.  As a team, you need to decide who is going to be trying to take the flag and who is going to defend your flag from capture.  As it’s all fine and dandy that you’ve captured the enemy team’s flag, but if you don’t have your flag at your base, you won’t be able to score it.

The obvious split for these duties is two and two, with two players attacking and two players defending, but this strategy can be shifted if the enemy team is using more than two defenders themselves.  Once you’ve got the flag in your possession you have some advantages.  As the flag carrier you aren’t spotted on the map until an enemy sees you, so staying out of sight can have its benefits.  Also, if you melee another player with the flag you’ll get an instant kill so keep that in mind.

If you aren’t carrying the flag and you’re an attacker, you’ll want to stay close to the flag carrier to help them get back to the base while covering their backs.  Advanced strategies for Capture the Flag include other players staying at the enemy base to steal their flag immediately after a capture.

Strongholds – Strongholds in Halo 5 is a new mode that has a lot of similarities to other objective modes that we’ve seen in previous Halo games.  The objective is to capture and hold three points on the map, while also fighting for power weapon spawns to turn the tide of battle.   Capture all three zones and you’ll rack up points quickly, but two out of three will also suffice.  Like Slayer, Strongholds capturing zones will be made easier with a team.  Not only will you capture the zone more quickly with more than one person in it, but dealing with enemies is easier with a teammate.

Players should also take notice of the elevated positions in this game mode.  Using the game’s new hover and ground pound can clear out a stronghold quite quickly and easily and your opponents will never be the wiser.

Breakout – Breakout is a brand new mode for Halo 5: Guardians that functions like a Last Man Standing with a bit of Capture the Flag mixed in for good measure.  You can win by two ways in Breakout, either kill everyone on the other team or capture a single central flag.  This mode functions something along the lines of what we’ve seen from Call of Duty in their Search and Destroy game mode or Counter Strike.  The first team to five won rounds win the match.

Breakout rounds go pretty quickly as you’ll notice that the time to kill in this mode is a little quicker due to all players starting with no shield.  A well placed headshot can take out an enemy in this mode pretty quickly.  Breakout also situates a number of different weapons across the map, but there’s no countdown timer like you’ll see in Slayer.  As in all Halo Arena modes, controlling these weapons can help immensely in the victory. 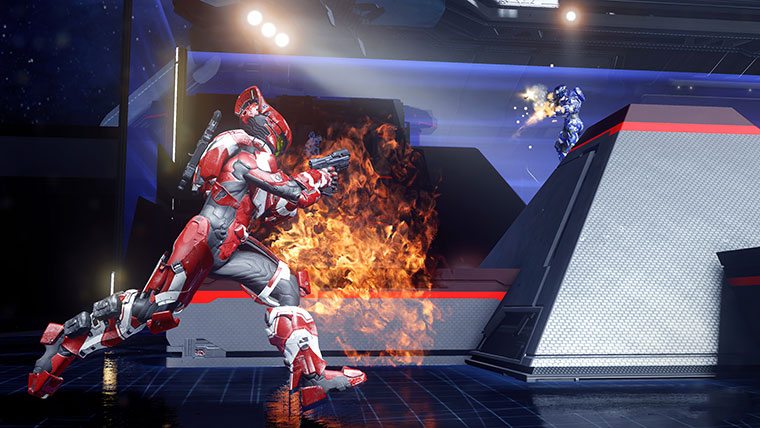 Halo 5 Guardians Arena Mode is not for campers.  If there is one sure fire way to die a lot in this game, it’s to stay still.  There have been a number of new movement mechanics added to the game that allow for map exploration and fast moving combat.  Maps have been designed with many areas having multiple ways to access them, whether that be from standard methods of entry like doors and alleys, or alternative ways that require using the game’s new climbing system to find windows and other elevated areas.

With so many grenades littered across the map, you’ll almost always have grenades at your disposal in Halo 5.  These can be very powerful allies in taking out your enemies, but you can also hurt your teammates if you just constantly spam them into firefights.  Remember that grenade damage hurts your teammates exactly the same way it hurts your enemies.

The Spartan ground pound that has been added to the game is a very powerful weapon.  Use it well and you can instantly kill your enemies.  Finding elevated positions over control points in certain game modes can give your team a big advantage.

Boost out of the way of Fire

Spartans can now boost around the map, but be mindful of the cooldown timers associated with this.  If you’re able to manage your boosts properly you get out of situations in Halo 5 Guardians that previous Halo games would have you dead to rights.  Boosts work well in dodging things like sniper fire, rocket shots, or any firefight where you might be at a disadvantage.

By aiming down sights while in the air, you can now hover for a short period of time.  This move not only may confuse some players, but can give you an elevated position to shoot at players that might be hiding behind cover.

Stay with your team

Staying with your teammates is a sure fire way to win almost any gun fight against a single enemy.  Two guns is always better than one.

Power weapons in Halo 5 Arena might be more easy to find, but that doesn’t make them any less important in defending.  When the countdown timer is approaching zero you should be grouping around these weapons to keep them from falling into the wrong hands.  Good teams will control these areas on the map.

Aim for the Head

This goes without saying, but you should almost always be aiming for the head in Halo games.  Unless you’re rocking a weapon that uses some sort of splash damage, the most commonly used weapons in Halo 5 Arena mode are going to pistols, battle rifles, and DMRs.  These weapons are way more powerful if you hit an enemy in the head.  Watching for the visual cues that an enemy shield is popped and following up with a headshot will almost always be an instant kill.