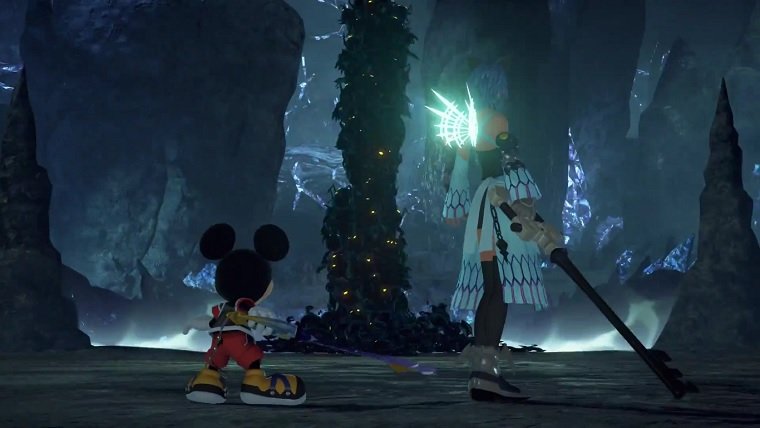 Kingdom Hearts HD 2.8’s 0.2: Birth By Sleep – A Fragmentary Passage has a number of boss fights in it, with us telling you about a few of them already. The first boss fight in the game was known as the Demon Tower, where you fight a combined Heartless being that was rather difficult. Well, now that you have leveled up more, be prepared for a longer and more difficult fight in round two, but this time you at least have some help.

For the most part, the second battle against the Demon Tower is very similar to the first, with the tower having the two forms, a yellow form that you can lay into and the red/orange form that is constantly rampaging across the level. However, what you will notice this time is that it stays in its red/orange form much more often, requiring you to be much more careful, but thankfully you have Mickey here to help some too.

On top of that, the Demon Tower this time comes with six full health bars, so this one will take you a good bit longer to take down. Like before, anytime the Demon Tower is in its red/orange form, using blocking very mindfully. Wait until the Demon Tower’s attack has almost hit you before doing it, or you’ll leave yourself completely vulnerable.

While it’s almost best to play defensive at times, it is very helpful to chain your attacks together to gain use of the Spellweaver Command Style. If you can manage to use it enough and get its finisher, that will definitely help knock some health off it.

What you really want to be on the look out for though is the Command Style Wayfinder that is a team up with Mickey. With this attack, you will basically be invincible as you and Mickey lay into the Demon Tower until the timer expires. The only problem is that the enemy moves so much that you may not be able to get to use your finisher. If not and the Wayfinder timer expires, just go back to your original strategy and before long you should have the Demon Tower defeated for the last time in the game. There is one more spiritual successor to this in the form of the game’s final boss though that we’ll discuss in another guide.