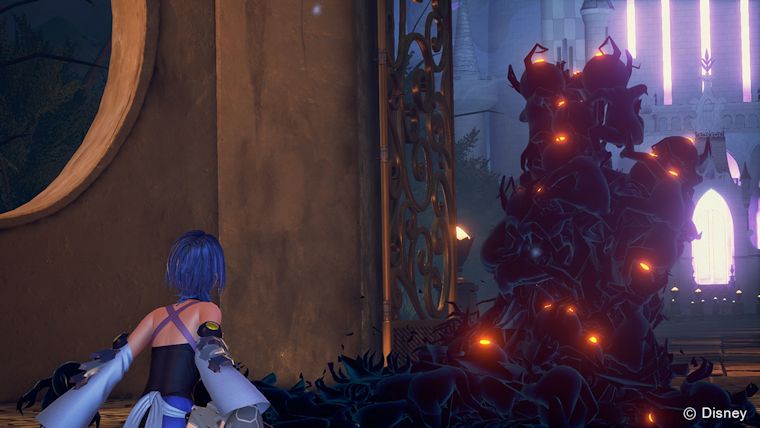 Kingdom Hearts HD 2.8 Final Chapter Prologue is the latest collection of Kingdom Hearts games brought together, but what makes this one special is that it includes a completely new game with 0.2: Birth By Sleep – A Fragmentary Passage. This section of the game is pretty short, but holds a few different boss battles within it, including the Demon Tower.

Kingdom Hearts 0.2: Birth By Sleep takes place within the realm of darkness as you take control of Aqua. The start finds you in the now fallen version of Enchanted Dominion in the Castle Town, where you will be introduced to the mechanics of this game. Along the way, you’ll fight various Heartless, both old and new, but at the end of the area you will come across the first boss in the game known as the Demon Tower.

The Demon Tower is a large skinny tower of combined Heartless that has two different forms. The first is its basic and most vulnerable form, where all the Heartless eyes in the tower are yellow. When this is the case, you will want to lay into the enemy and do as much damage as you possible can. However, you have to be careful, because it will very quickly change to a red/orange form that is essentially its “berserk mode.”

When the Demon Tower is red/orange, you will want to be on the defensive. Even with a Style Command like Spellweaver active, you will take a lot of damage. While you are at level 50 to start, and possibly a few levels higher by now, you will still not be able to take too many hits here. Instead, what you need to learn to do is use your dodge roll and blocking effectively. Dodge roll isn’t as useful here, but you should try to use it. Your biggest weapon is the block, which will not only allow you to block, but also parry and counterattack.

The typical pattern here is going to be attack a little when yellow, back off and play the defensive game when yellow, and eventually the Demon Tower will go down. It doesn’t really have all that much health here, but when in its red/orange form, it can really chain some combos together and take you out. Just remember to use your Curaga spell wisely and put any of the items like Potions and Ethers you find into the shortcut menu.