A comprehensive guide to Chapter 5 of Little Nightmares II Spoiler warning: As you can probably guess, this article features heavy spoilers for chapter 5 of Little Nightmares II.

Collectables in this chapter:

Enemies: I’ll leave you to discover this for yourself 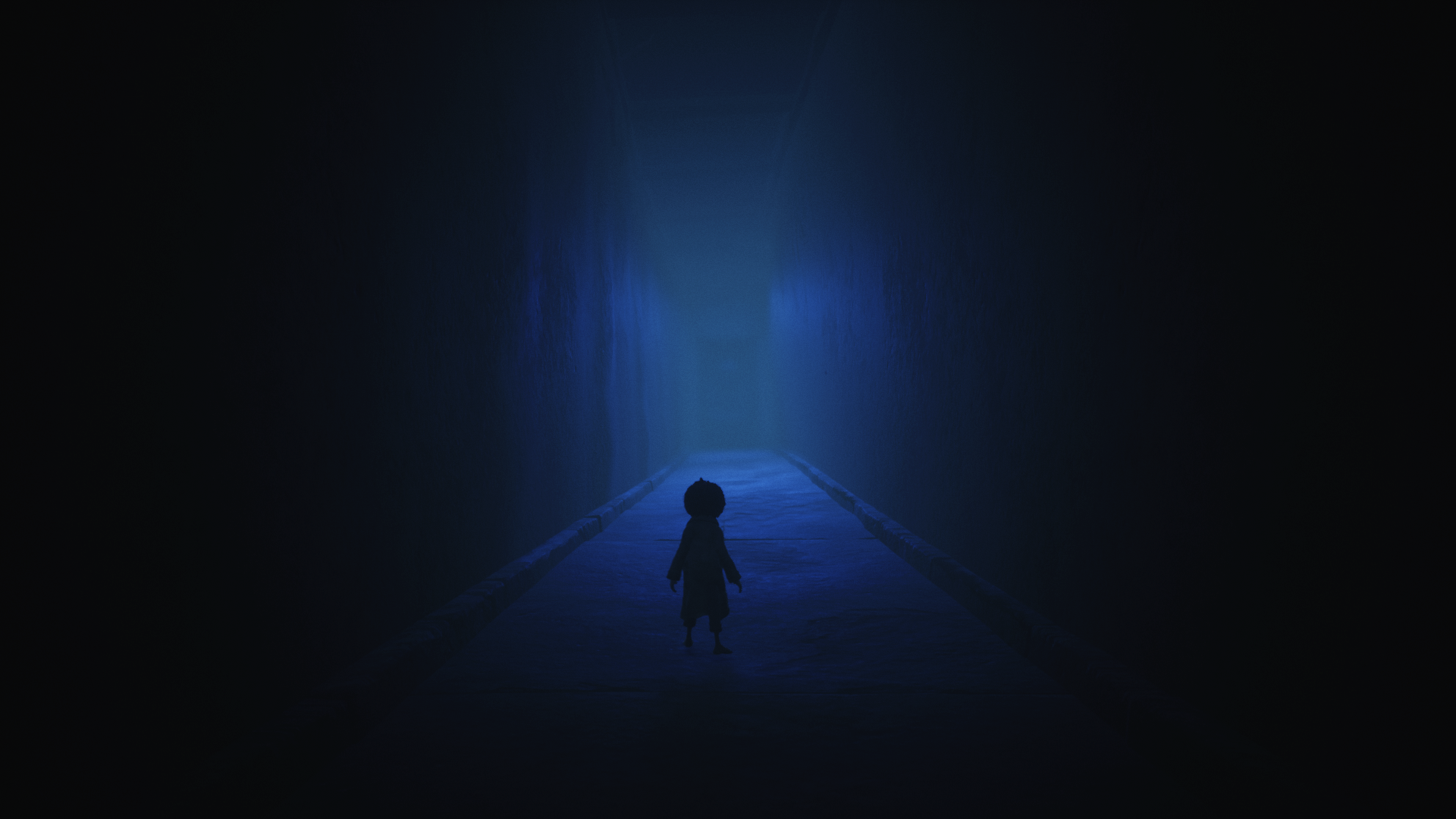 Once you’ve stepped through the glowing purple door at the end of chapter four, you arrive at the hallway you’ve been seeing through the TV in the previous chapters. As you approach, the door will open revealing a large room with a glowing door opposite you.

As you approach this door, it will shut but one on your right will open. Something you should notice early on is the music that is playing – it will get louder as you approach the door you need to go through. You’ll also notice that Mono will almost glitch as you approach the correct door too, almost like pieces of him are drifting away.

This becomes more important later on when there are more than one door to choose from otherwise you’ll spend hours running aimlessly through them and going nowhere. Go through the door that opened and you’ll end up on some stairs above.

Climb them and pass through the next door. You’ll find yourself in a corridor with two doors – the one you came through and another further down. 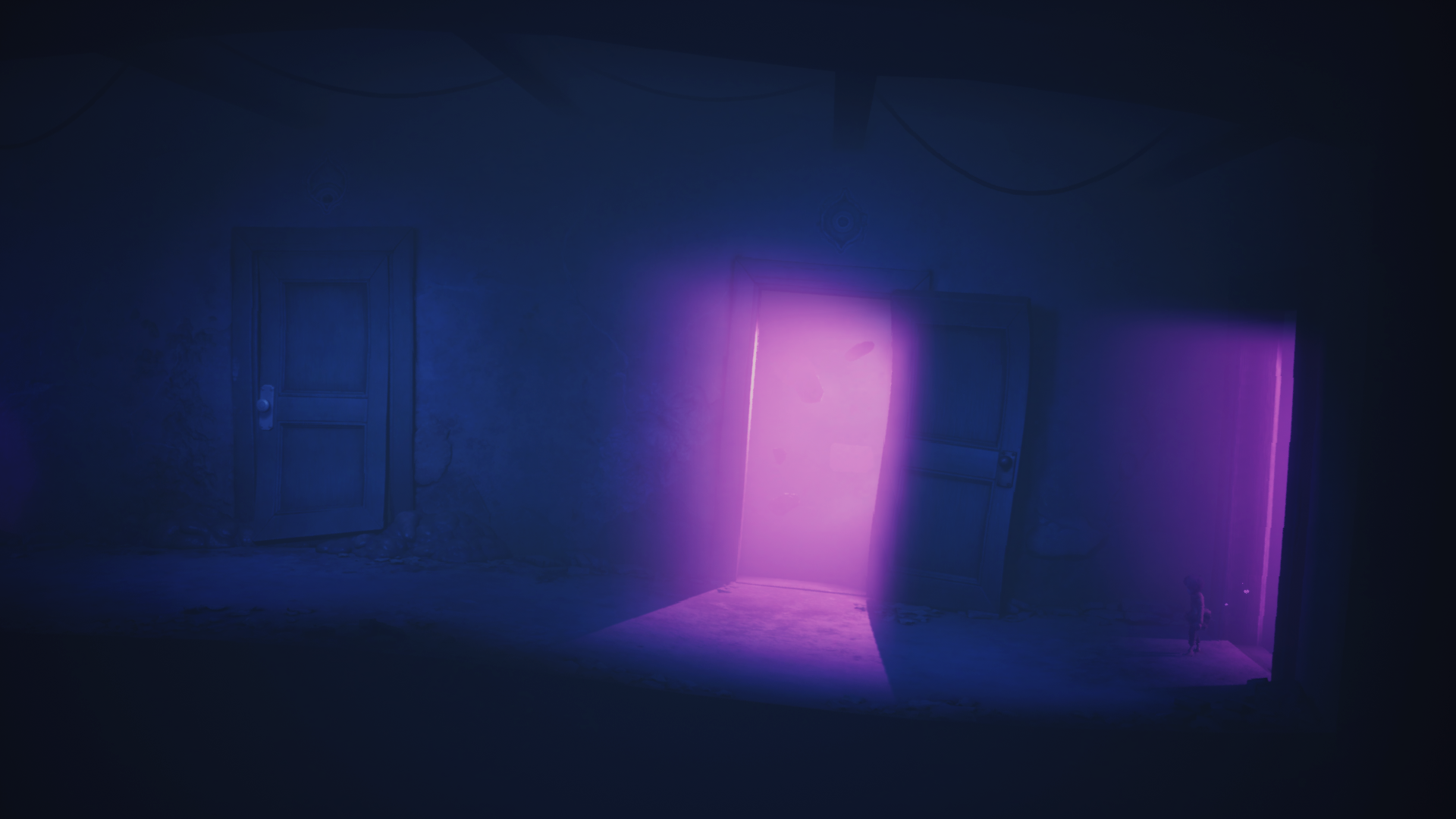 Go through it and you’ll find yourself on another set of stairs. Climb them and go through the door. The next hallway has four options. Head to the door opposite you but don’t go through, just push it open. It’s linked to the other closed door, so that will open too. This time the sequence is four, three, one and then you’ll end up on some more stairs. Again, climb them and head through the next door. 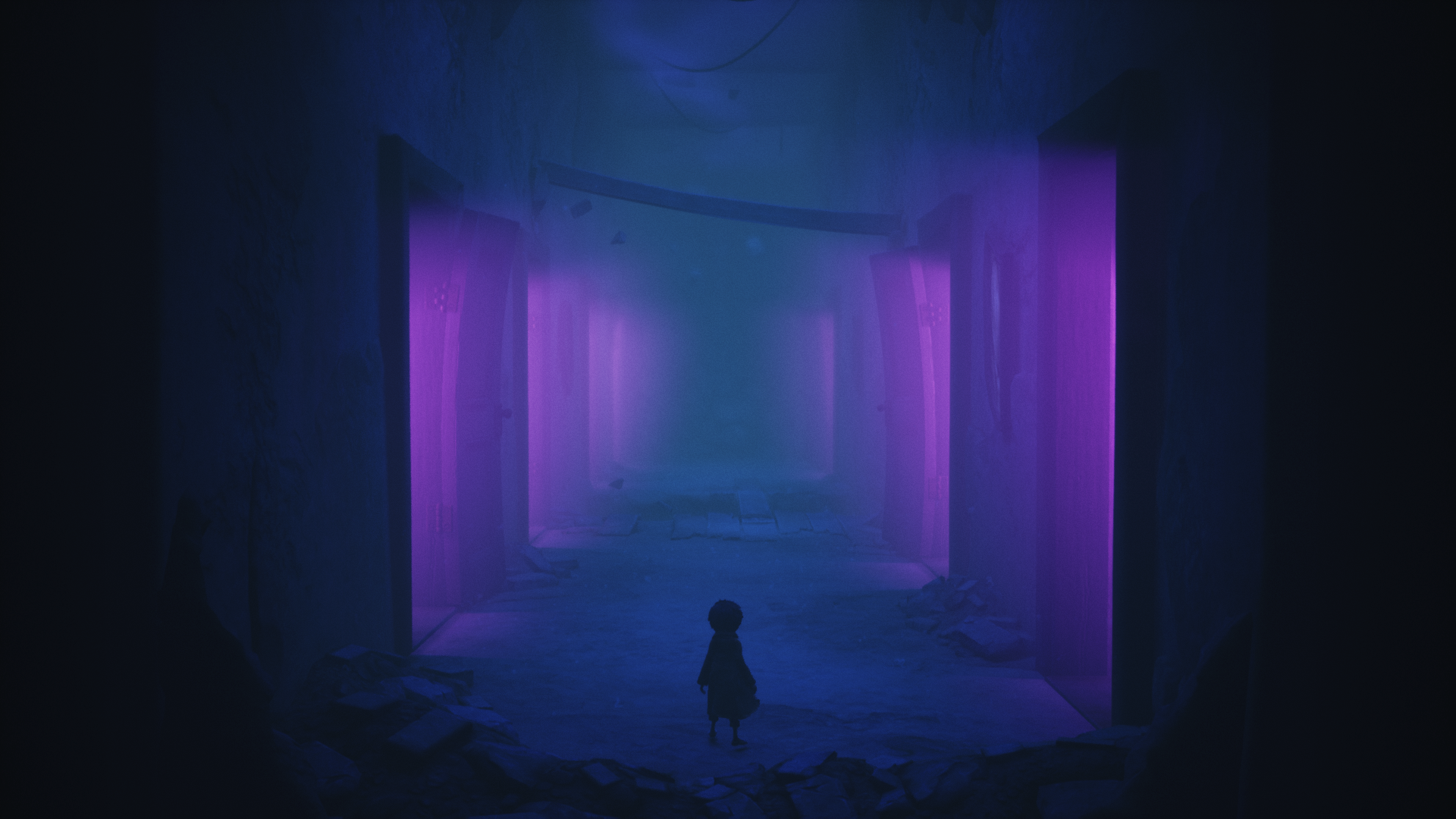 There are seven doors this time, but first push down the plank in front of you so you can reach them all. The order is then one, four, five and then you’ll end up on some more stairs. Climb them and head through the door. 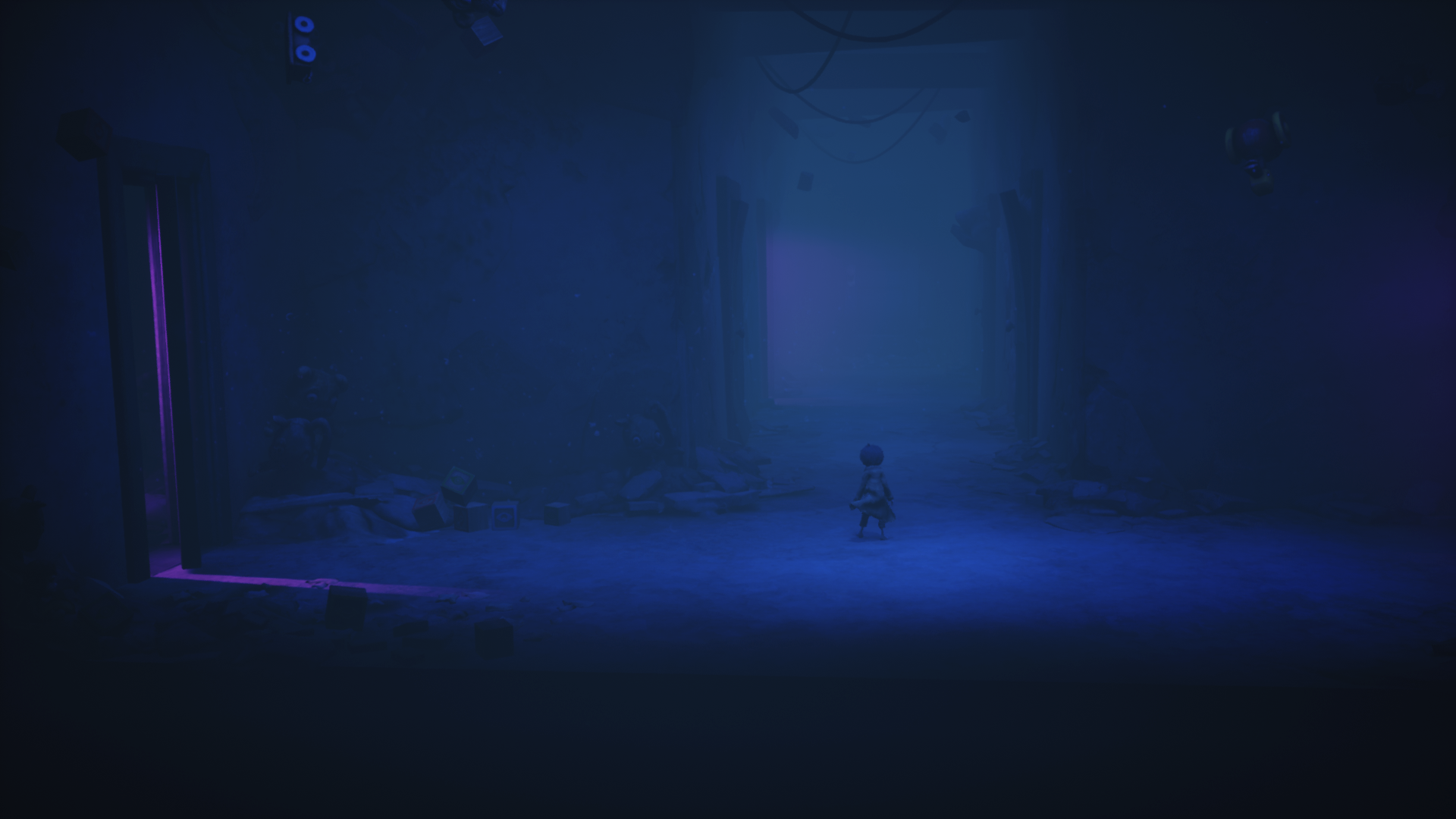 In the next hallway, head through the door opposite you. Inside is reminiscent of your first meeting with Six, but the music box and Six herself are bigger than you remember. Six appears to be guarding the music box. 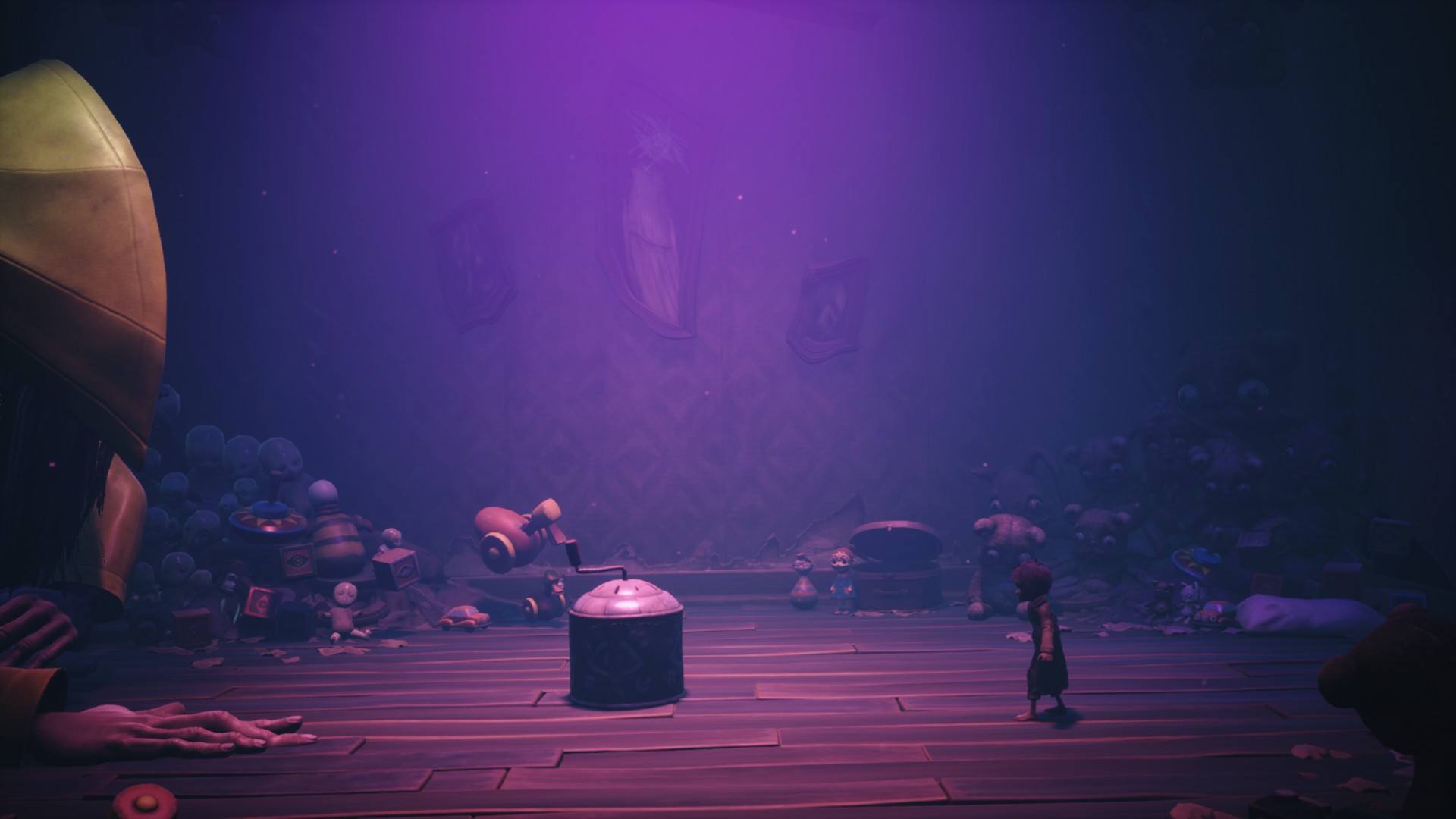 Call out to her a few times and she’ll come forward and eventually set the music box down. Behind where she was originally standing is a mallet. 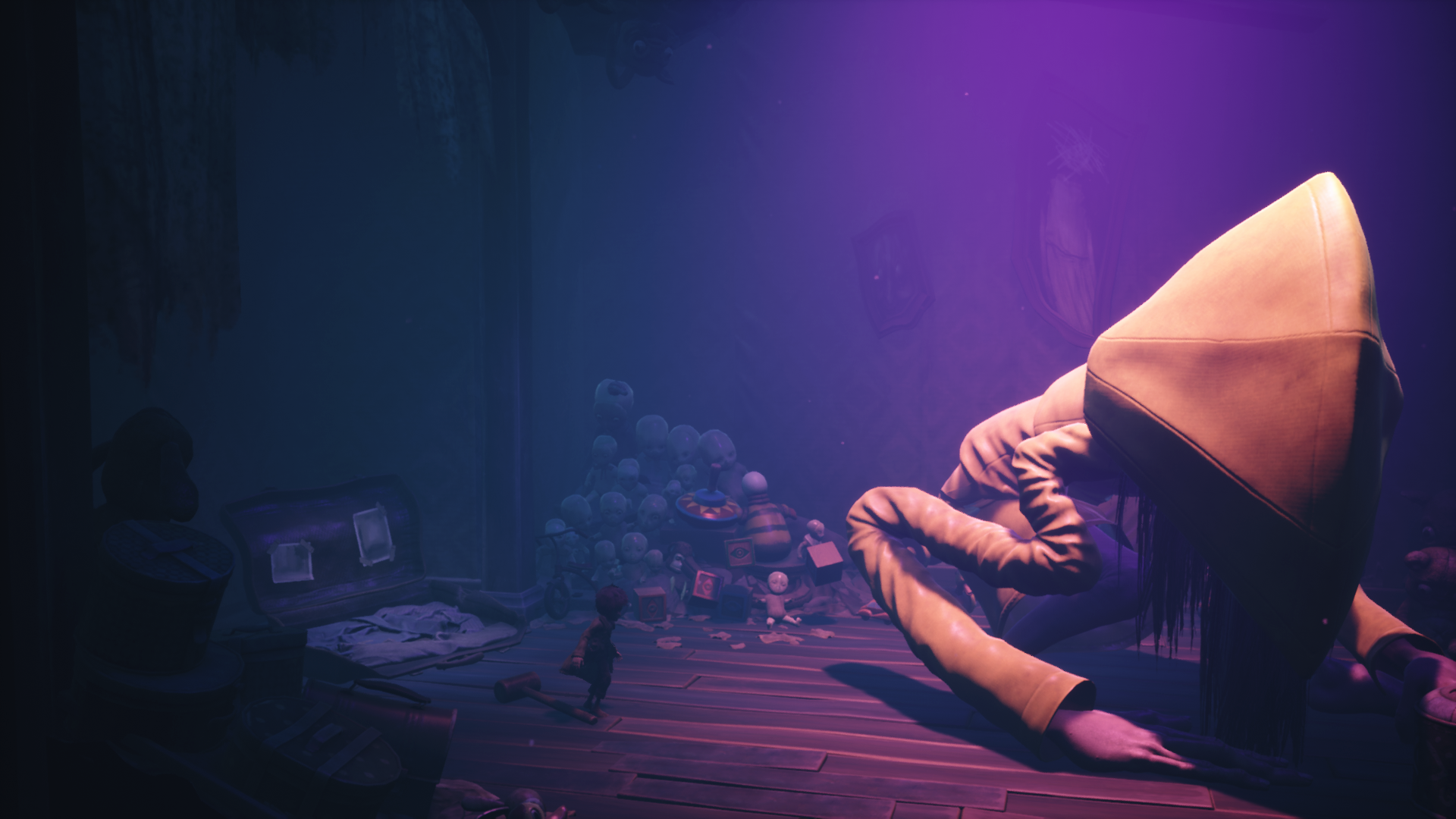 Pick it up and hit the music box and the place around you will start to crumble. Six will get mad so run out of the room before she crushes you.

She’ll now proceed to chase you so keep going until you reach another one of those glowing doorways. Run through and cross the next room until you reach a ramp. Run up it and jump through the vent and you’ll come to another room. 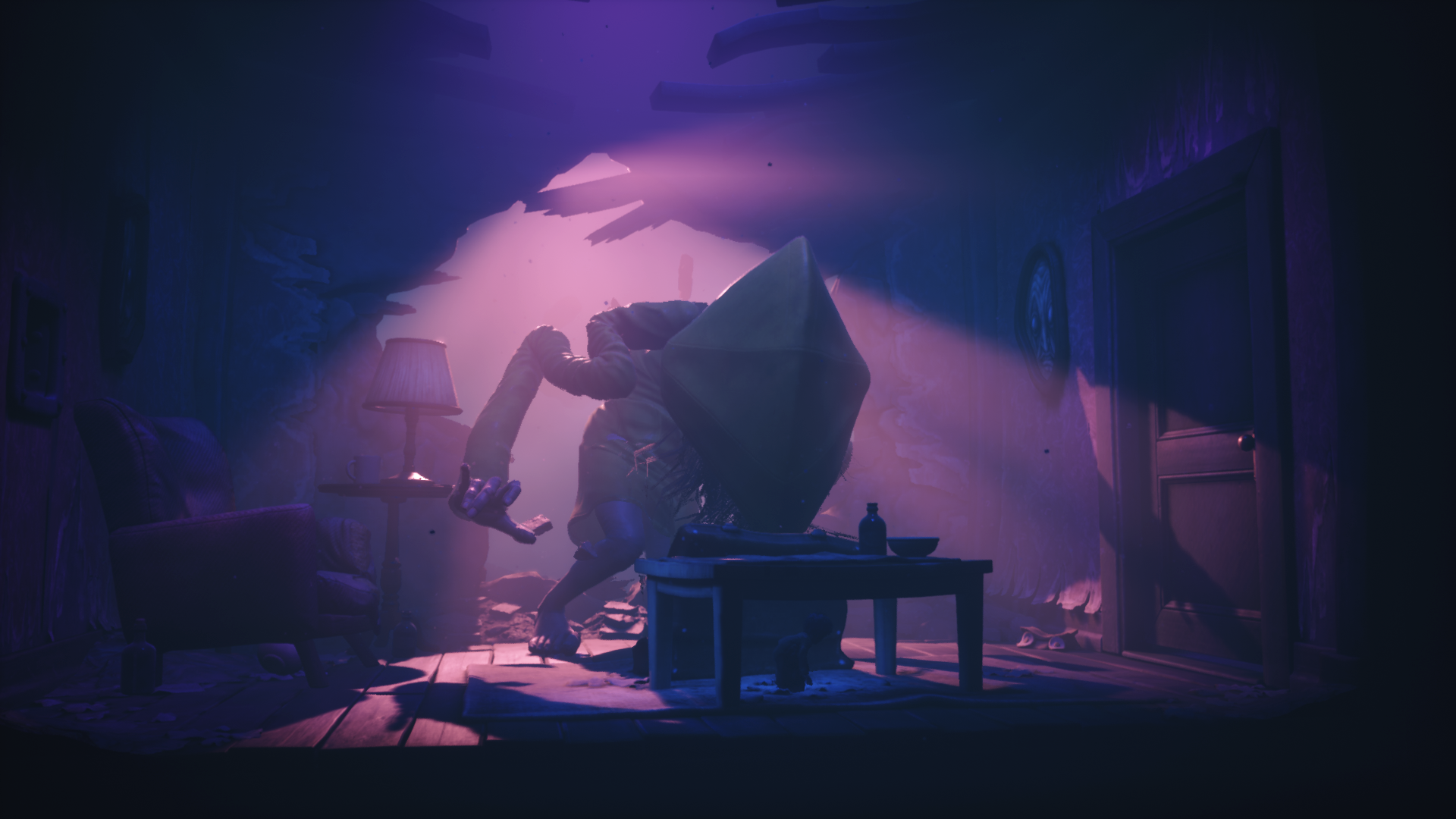 Hide under the table and Six will go on ahead. When she’s gone, follow her out into the next hallway and you’ll find a door with a hatchet embedded into it. 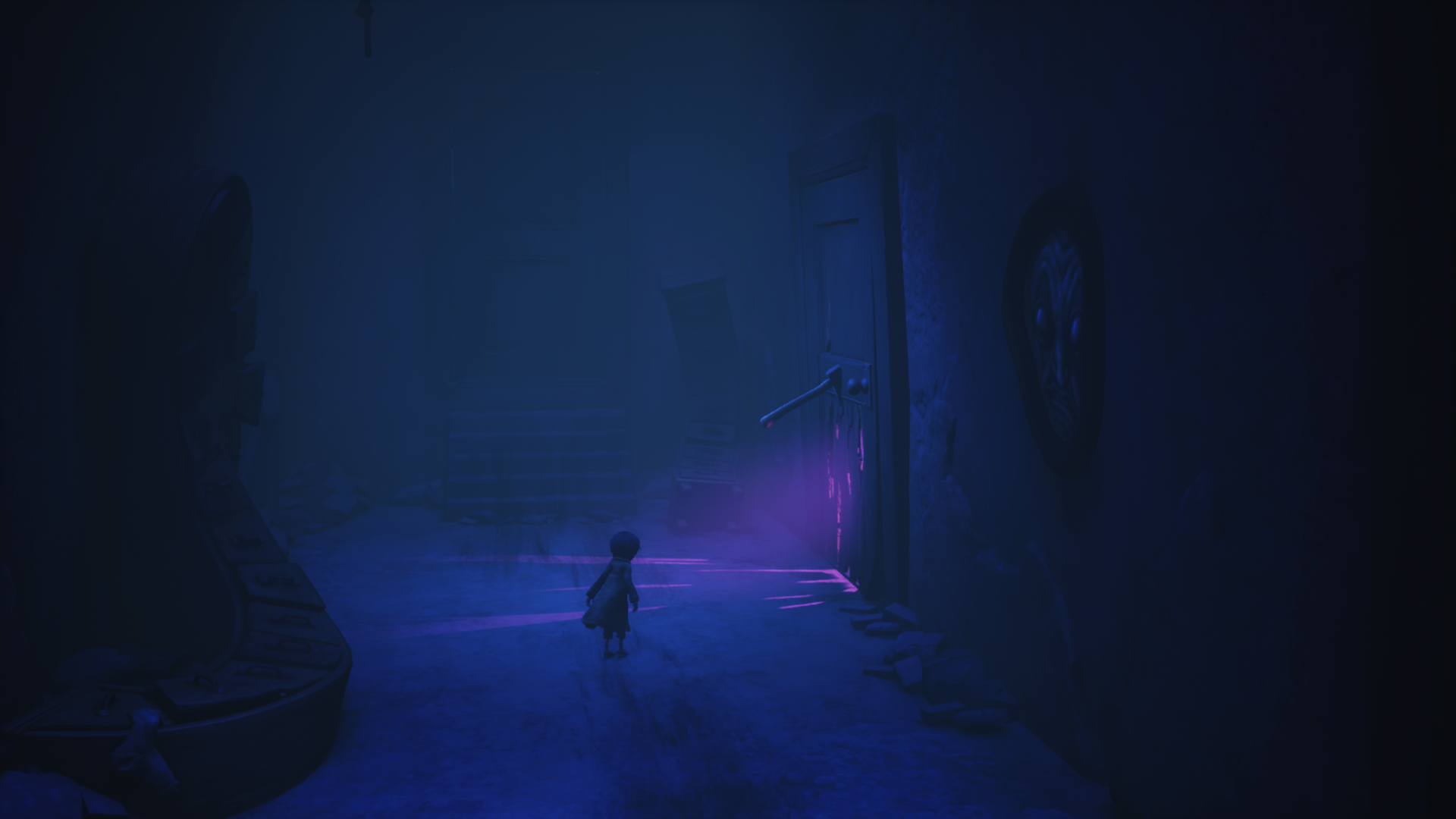 Pull it out and bash the door down. Inside, Six is guarding her music box again. What you need to do is keep hold of your weapon and call Six.

As she approaches, hop back through the glowing door and you’ll come out of the connected one on the opposite side of the room. You can then run over to the music box and take another swing. 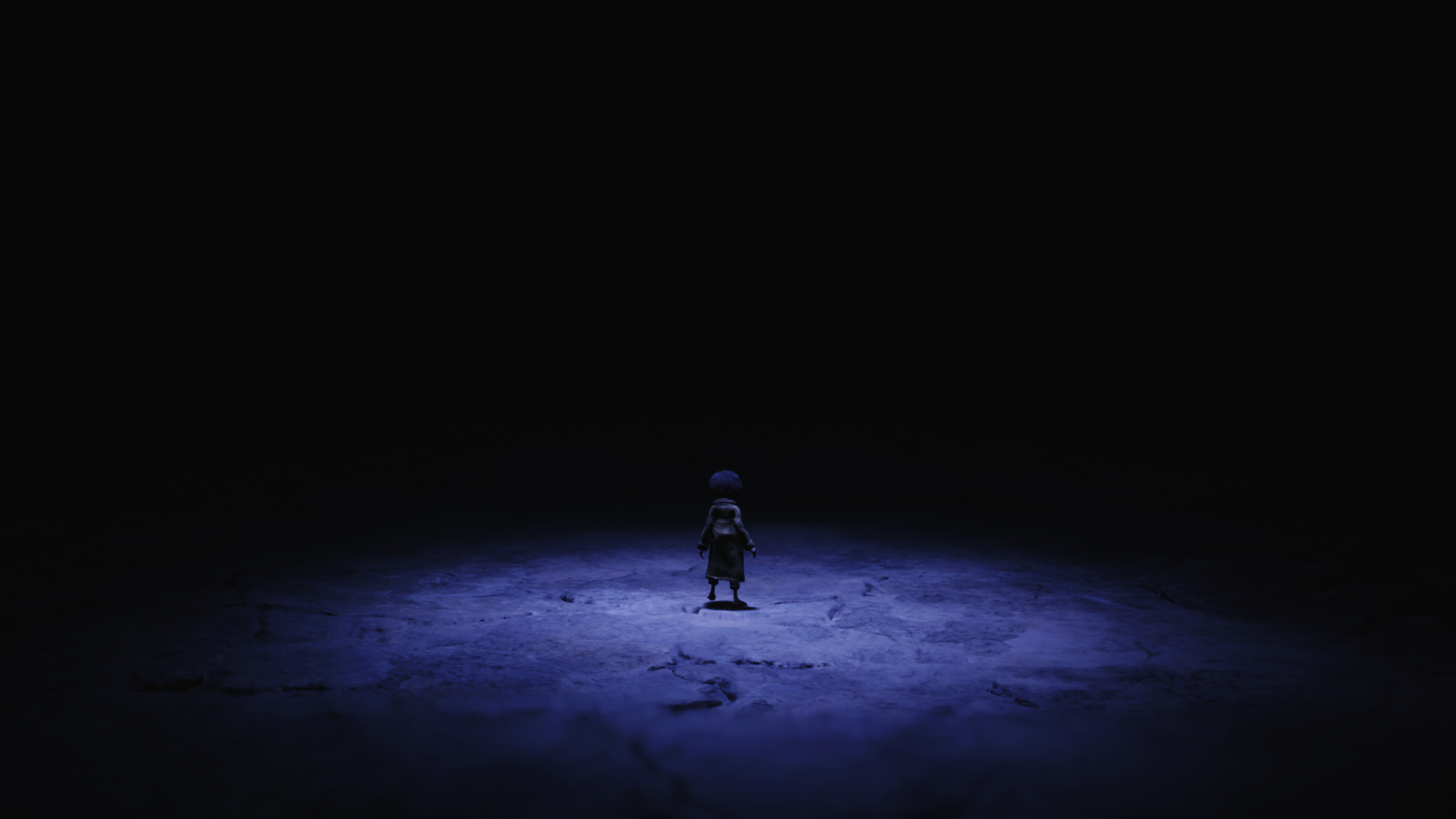 Mono will end up in darkness, but to the right is another door with a hatchet. Break it down again and you’ll end up in a room similar to before, though this one has four doors. 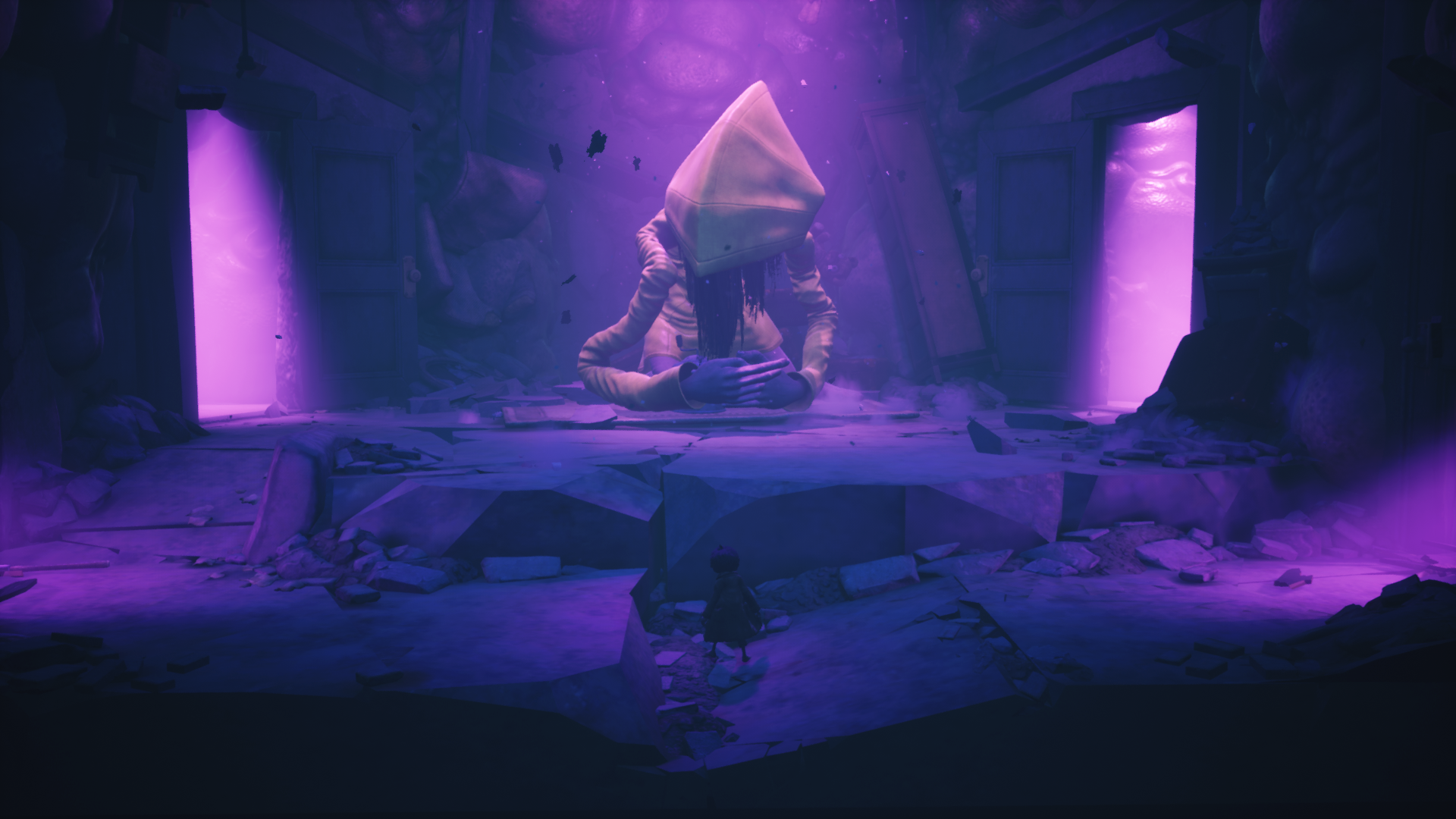 The two on the lower level are connected and so are the upper two. Go back through the door you entered and you’ll end up at the opposite side of the room. Call Six and then run back through. You’ll come back out through the first door and can run up the ramp to the door on the level above. Call Six again and run through and you’ll end up coming out the door furthest away from you. From here, run to the music box and hit it again. 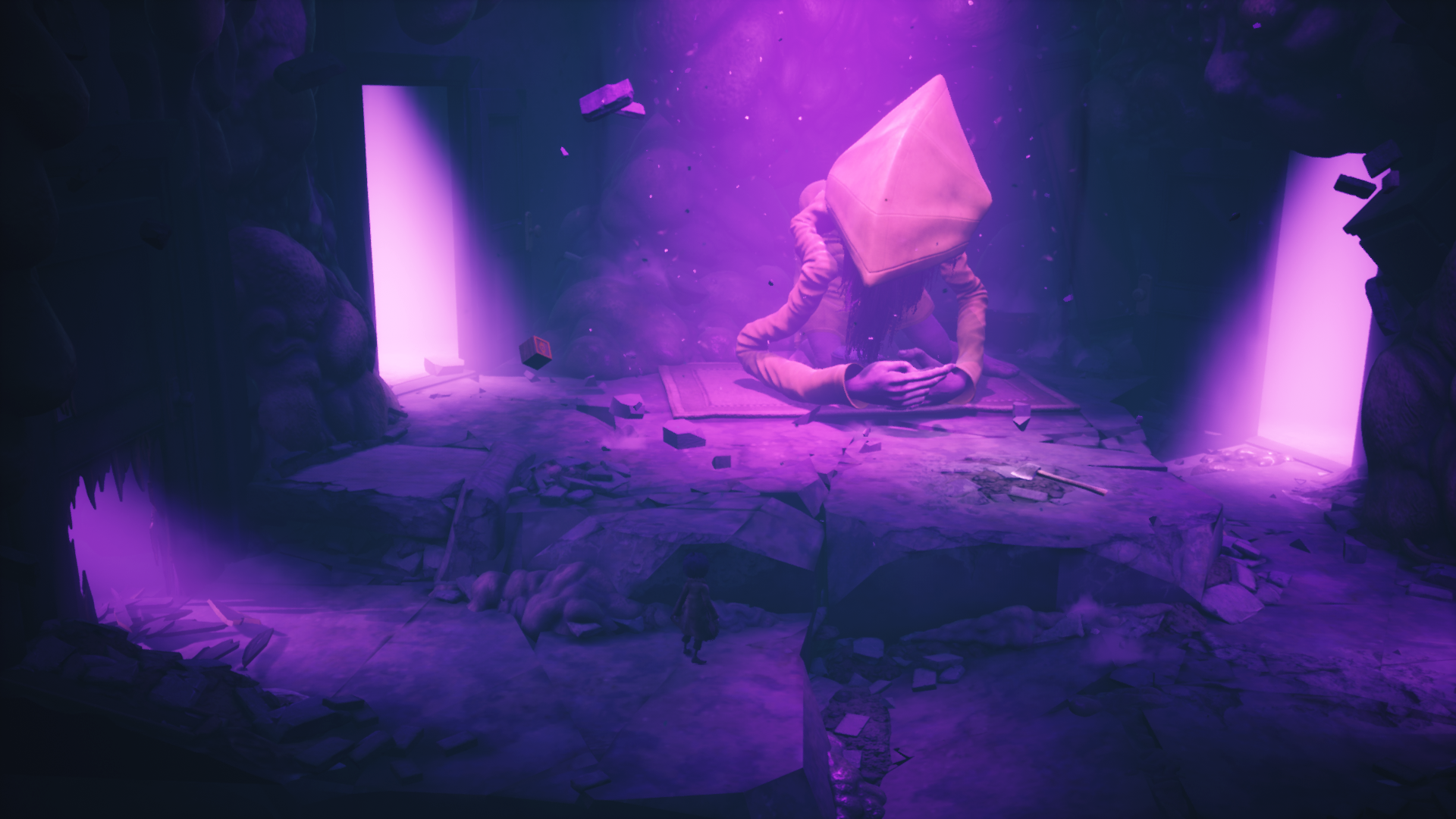 Again, Mono is in darkness, so keep going right until you come to another door with a hatchet. Break it down and go through. You’re in a similar situation to before, but this time you don’t have your weapon to hand. It’s on the ground by Six so you need to draw her away which is easier said than done. This is mostly done by trial and error, but the way I went about it was by shouting her when I was at the first door then jumping up to grab the hatchet. From there, I went through the door furthest away on the right and after exiting through the door on the left I ran to smash the music box.

You’re now at the final showdown between you and Six. If you try to run straight at her, she’ll swipe at you so pick up your hatchet and call out to her. When she moves her hands away, smash the music box. Six will stagger away giving you the time to hit it one last time. Destroying the box will turn Six back to normal. There’s no time to celebrate your reunion though. 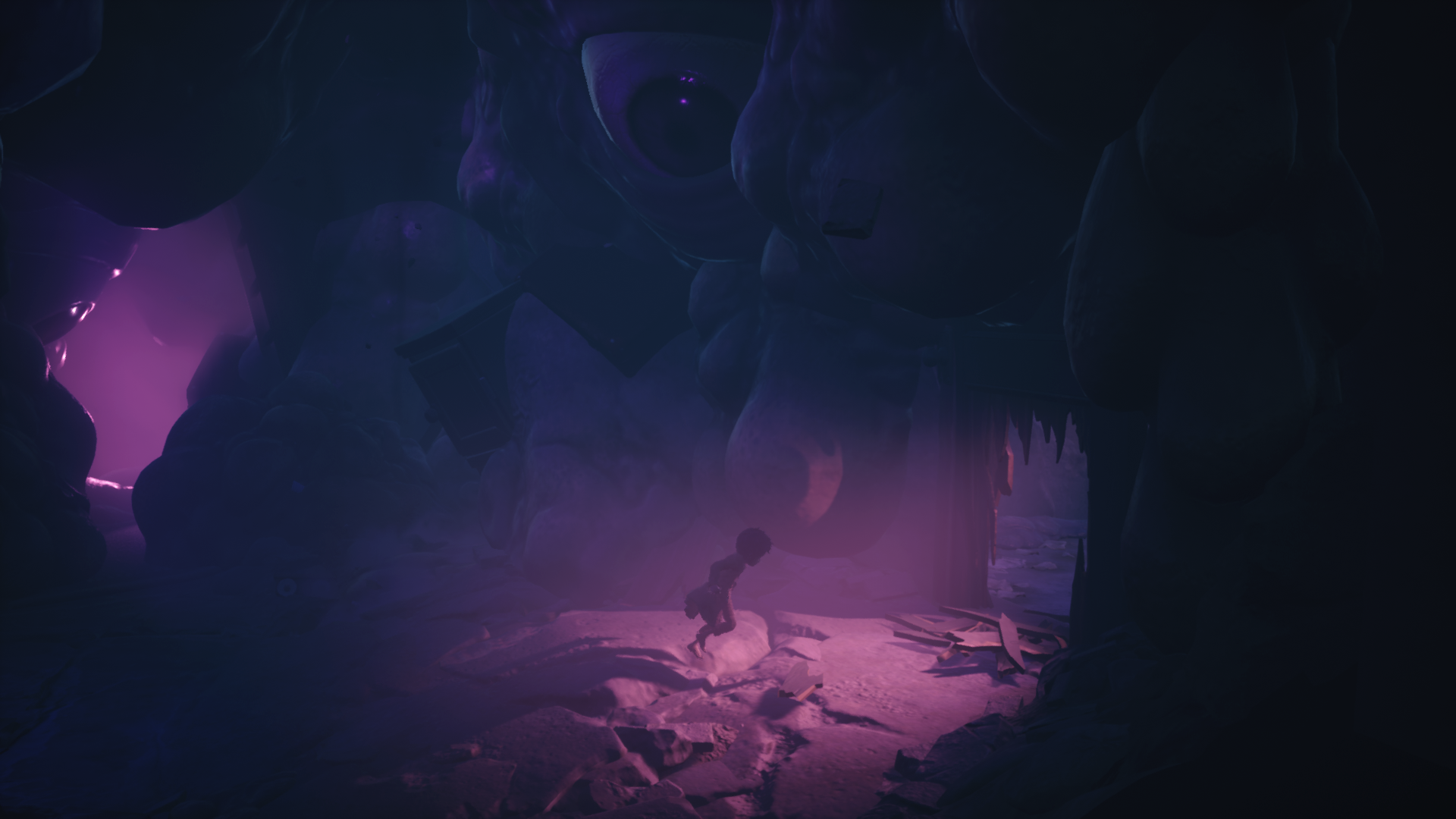 You’re now going to have to run for your life because this large, blobby mass is going to start chasing you. Escape from immediate danger and follow Six across a crumbling wooden bridge then watch the ending of Little Nightmares II unfold.