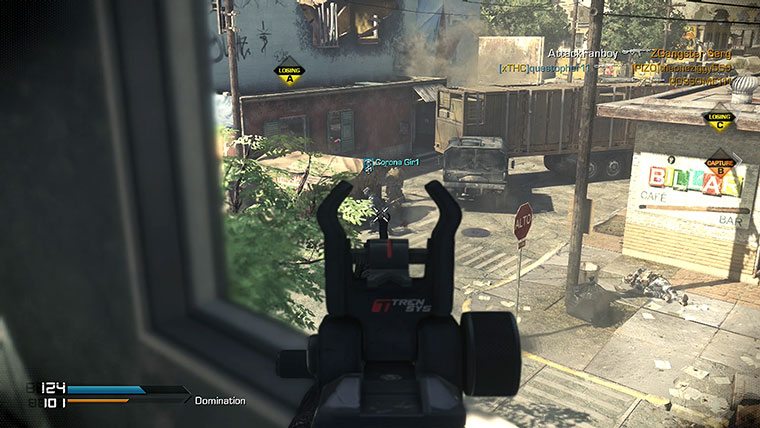 Call of Duty: Ghosts Onslaught has recently arrived, and with it, a couple of new weapons.  Both are pretty decent additions to the Call of Duty: Ghosts arsenal.  In this post, we’ll talk about the Maverick Assault Rifle, the attachments you should use and perks that can help you in the game.

The Maverick Assault Rifle is a pretty good gun out of the gate, because it allows you to play in a wide area.  It’s a medium ranged weapon with moderate distance kills, while also being pretty decent in close quarters.  It will suit a variety of play styles and class set-ups.  You can use the Maverick AR as a stealthy player, a rush or run & gun player, or even camp it out with this new weapon.

First we’ll look at good set-up for the Maverick AR as a stealth class.

The Maverick AR can definitely be used a stealthy weapon, but it doesn’t have the added benefit of having a built-in silencer.  So there are other guns more suited to this type of player.  But, if you are dead-set on playing stealthily while using the Maverick AR, you can do so.   Since the Maverick AR does have great iron sights, there’s no need for optics.  So you’ll save one attachment, which you can use for a silencer instead.   To tighten the weapon up, combine the silencer with the foregrip.  This set-up will retain decent range, stability, and keep you hidden from the enemy.

With this class, we forgo using a secondary weapon, as the Maverick will be more than capable of keeping you in the fight.  If worse comes to worse, you can always pick-up an enemy weapon if you run through your own ammo.  Since this is a stealthy class, and we intend on flanking the enemy from the side or behind, we’ll also forgo lethal and tactical weapons as well.

In Stealth Class set-ups you can go a number of different ways with your Strike Package rewards.  Since you’ll be focusing on catching the enemy off guard, you’ll have ample opportunity for Assault Strike Package Rewards.  But if you tend to die a lot using this class, a Support Strike Package set-up would help your team out more.

If there are perks that you simply can’t do without, that aren’t listed in our setup, you can always tweak this formula to come-up with your ultimate Stealth Class for the Maverick Assault Rifle.

The Maverick AR is a medium-ranged weapon, but it’s also a decent close-quarters gun also.  Again, the great iron sights will allow you to add two attachments to the weapon that make it even more equipped for the run & gun play style.   Combine the Maverick AR with the foregrip attachment and the muzzle break.  So why these two attachments?  First, the foregrip will give you better stability for those medium range encounters.  Second, the muzzle brake will allow you capably fight back against enemies at longer range.  The gun itself will do pretty well in close quarters, and we’ll set up perks to deal in close encounters.

The Strike Package that we use with all Run & Gun classes is always the Support Class.  Since you’ll be doing a lot of charging into battle, there’s a higher chance you’ll be killed.  Use the support class to help your teammates with Sat Coms, Bullet Proof Vests, and Oracle Rewards.

If there are perks that you simply can’t do without, that aren’t listed in our setup, you can always tweak this formula to come-up with your ultimate Run & Gun Class for the Maverick Assault Rifle.