The latest news in the world of video games at Attack of the Fanboy
September 3rd, 2015 by Dean James 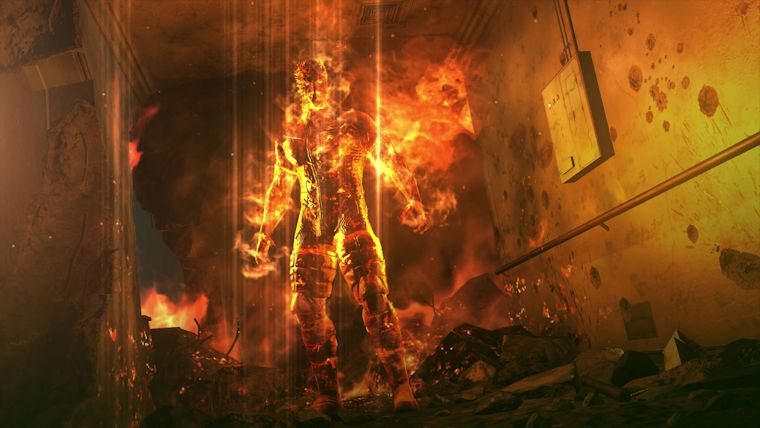 Not long after starting the prologue of Metal Gear Solid V: The Phantom Pain, you will first come across a very mysterious character that is on fire. There are multiple cutscenes that have you getting away from the Man on Fire at first, but then it comes to a point where you actually have to escape from him manually.

The first time you actually have control in a large room with him, run towards what seems like the exit and it will prompt you to dive. Do so and another cutscene occurs. After this cutscene, run for the giant hole where that vehicle that came in previously made, and another cutscene will occur that has you face to face with the Man on Fire.

You however will not be fighting him here, but after another series of cutscenes, you will end up on horseback trying to escape from him, which helping you to do so is the purpose of this guide.

Overall, this is a really easy start to Metal Gear Solid V: The Phantom Pain. The Man on Fire is on his own fire covered horse, and you are on your own horse that is being steered by another that just picked you up, who will remain nameless.

Luckily, you do not have to worry about steering at all here, but rather just have to fend off the Man on Fire’s advances. At times, he will start making fire come out from the ground, even up close to you, but this isn’t a big concern.

What you should be concerned with however, is his attack where he actually shoots flames at you. This does cause some damage. You can usually tell when he’s charging this attack, complete with a sound effect he makes, so at this point, shoot him to cancel out the attack.

Also, if he is getting too close up onto you, shoot him right in the face. Eventually you will seemingly get away, before he comes back and does something you have no control over, but you have successfully escaped technically at this point.

Make sure to stay tuned upcoming boss battles, which are bound to get much harder, and other guides and tips as we play through Metal Gear Solid V: The Phantom Pain.