Switch Axe Monster Hunter Rise – Move List, Combos, and How to Use

Use both of this weapon's modes to adapt in any situation. The Switch Axe in the Monster Hunter series solidified itself as one of the strongest weapons, and in Monster Hunter Rise this is no exception. There is a reason that speedrunners and participants in tournaments tend to choose this one, as it can dish out the most damage possible, in a very short time. That said, it does have a small learning curve, but when you are done with it and mastered the weapon, it can be the strongest companion in your adventures. Below in this Switch Axe guide, we will check its moveset, combos and why it is such a powerhouse.

Monster Hunter Rise didn’t add much to the Switch Axe, besides tweaking the axe form a bit and adding its new Silkbind attacks, but that’s because it didn’t really needed to. This axe/ sword hybrid is already powerful as it is, with drawbacks that don’t really affect its efficiency much.

The Switch Axe is two weapons in one, with its Axe form acting as the default, more heavy form. The Sword part is where the real damage comes from, with faster, more impactful attacks and the powerful Element Discharge. The main goal in Monster Hunter Rise when using this weapon is to gather enough gauge in axe form, then switch to sword and unleash hell to any monster in the way, finishing things up with Element Discharge. This is easier said than done though, as the weapon has a lot of resource management going on. Switch Gauge, Slash Gauge, Amped State, Power Axe State, Sharpness, Stamina, all these are what you need to pay attention to in order to be efficient when using the Switch Axe.

As you see, there is a lot going on with the Switch Axe, even if it is actually a straightforward weapon in terms of gameplay. You just need to attack, a lot, but you need to manage your attacks correctly, with both the axe and the sword forms, in order to fill your gauges up and maintain the Amped State for as long as possible. I mentioned it above, the Switch Axe has quite a learning curve at first, until you practice a lot and be able to do all of this mechanically. Also, remember that the sword form is actually not deflected by any of the monster’s parts. While this is good damage-wise, it will eat your Sharpness in no time.

Monster Hunter Rise ensured to make the weapon simpler, while also buffed a bit the axe form, which can now dish out quite some damage, instead of just being a filler to gather gauge for the sword form. Don’t be afraid to use the axe as much as possible, since in this installment you won’t be losing as much damage output as in the previous entries of the series.

The Switch Axe is able to inflict massive  amounts of damage, very easily and very fast. Monster Hunter Rise makes it clear that it follows the path of ‘offence is the best defense’, and what it does, it does well. Lacking any defensive mechanisms though does hinder it quite a bit, especially if you are a new player, unfamiliar with the game’s mechanics and monsters. It does compensate with the damage it can cause to monsters, but if you decide picking this weapon up, make sure to stock up on healing items and dodge as much as possible. Don’t be eager to start slashing away, just because it is easy to do and make sure to use your Silkbind attacks when in a pinch. 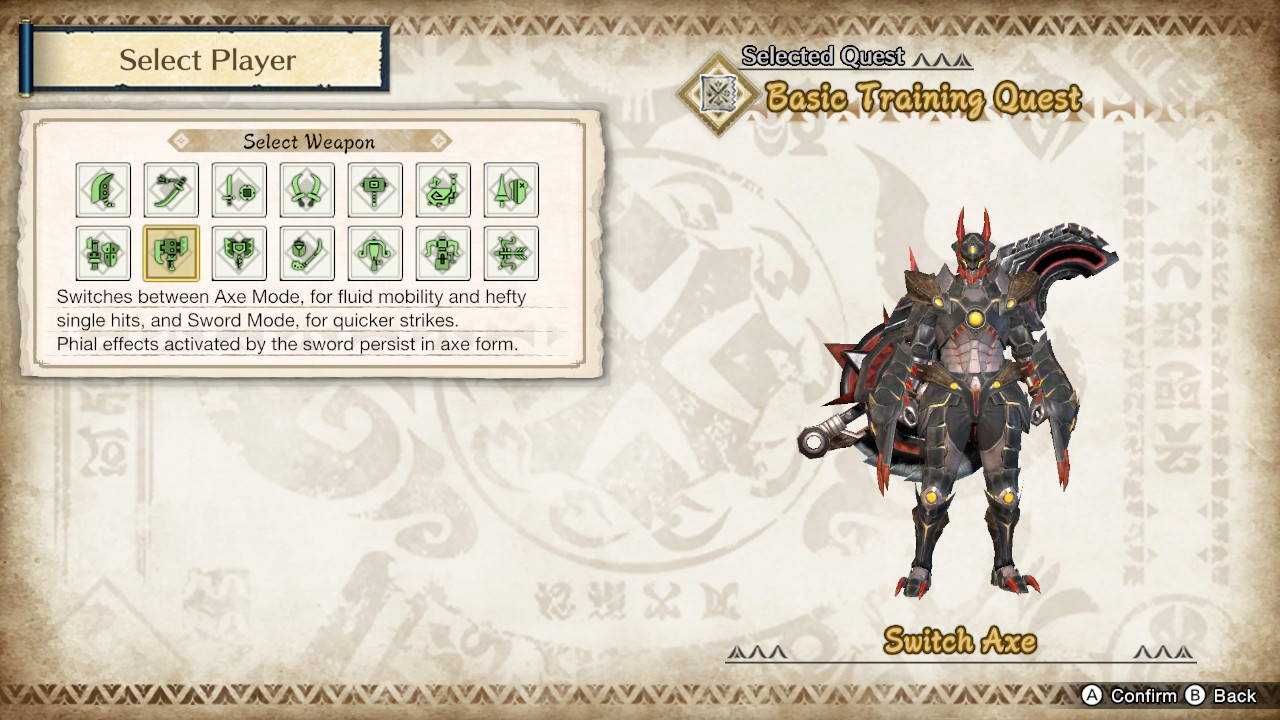