The latest news in the world of video games at Attack of the Fanboy
September 11th, 2020 by William Schwartz 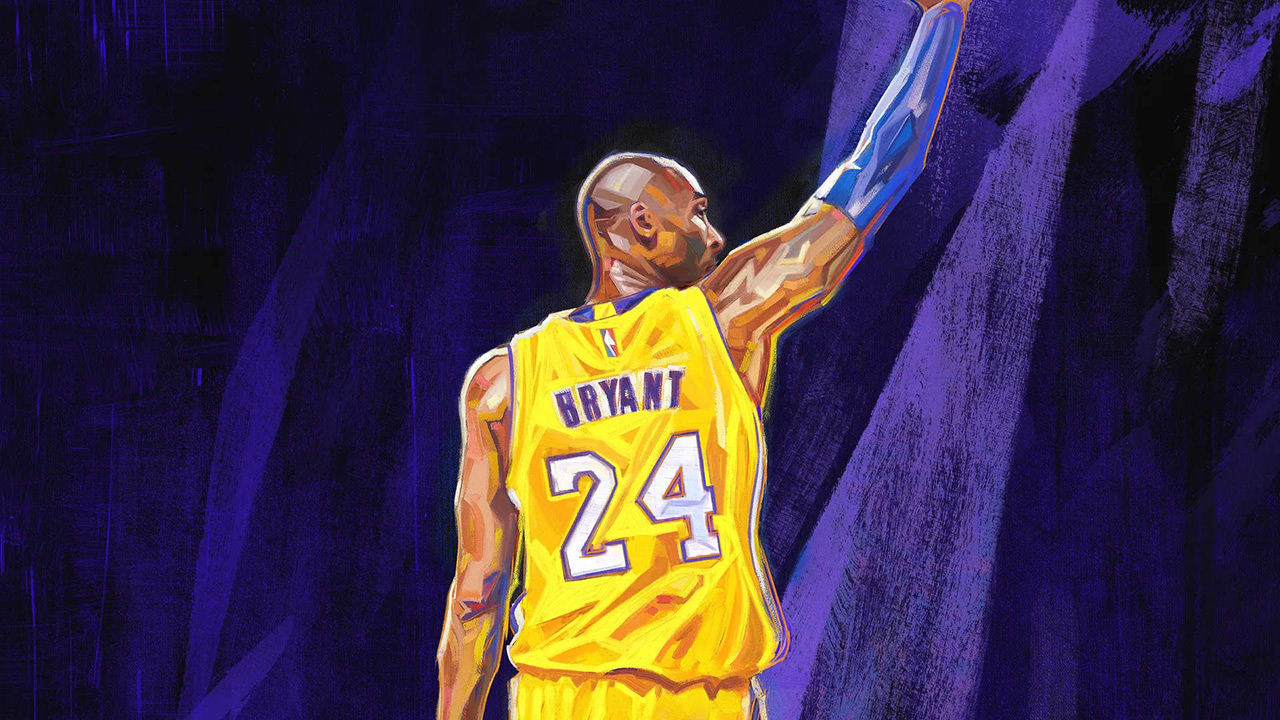 Building a player in NBA 2K21 can be a daunting task.  There are so many decisions to make regarding your My Player in 2k  Basketball, as well as the fact that your player is a pretty considerable time sink, you’ll want to get a good idea of what you’re going for at the onset of your player creation as the decisions you make at the beginning will affect that player’s entire career and potential stats.  In this guide for we’ll explain how to build your 2k My Player and the things that you need to consider, as well as some of the best builds for NBA 2k21.

Starting the player creation suite you will need to select your basics information.  Some of the details on the first page don’t matter much, but your position on the court certainly does.  Pick a position that will correspond with your intended skill set.  For example, you wouldn’t want to create a 6ft tall Point Guard that’s a paint beast.  While there is some crossover between positions, you’re going to want to ultimately cover as many skill sets as possible with your players. 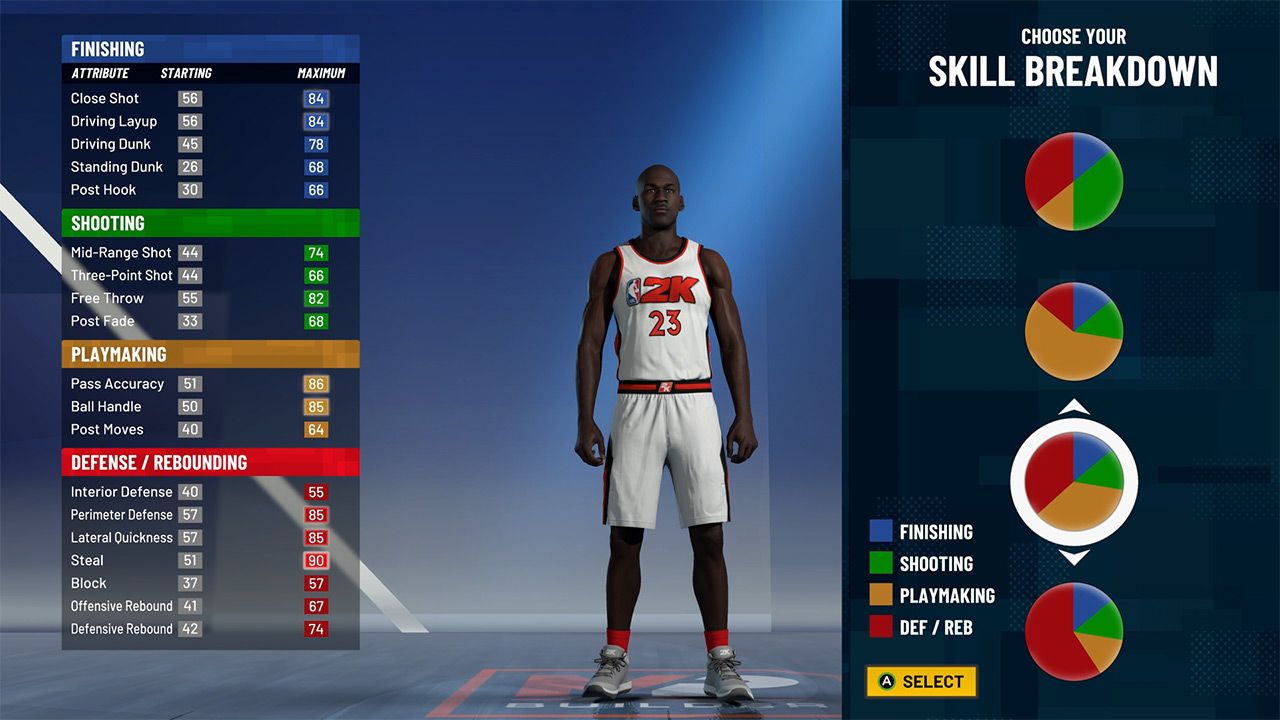 The pie charts that you’re asked to choose from contain your skill set breakdown.  Blue is for finishing.  Green is for shooting.  Yellow is for Playmaking. Red is for Defense/Rebounding.  Depending on the size of the pie piece will be how high the potential will be in that skill set.  The pie chart that you pick will determine what the maximum ratings for your player that you can earn through your career.  There are many different archetypes to choose from. 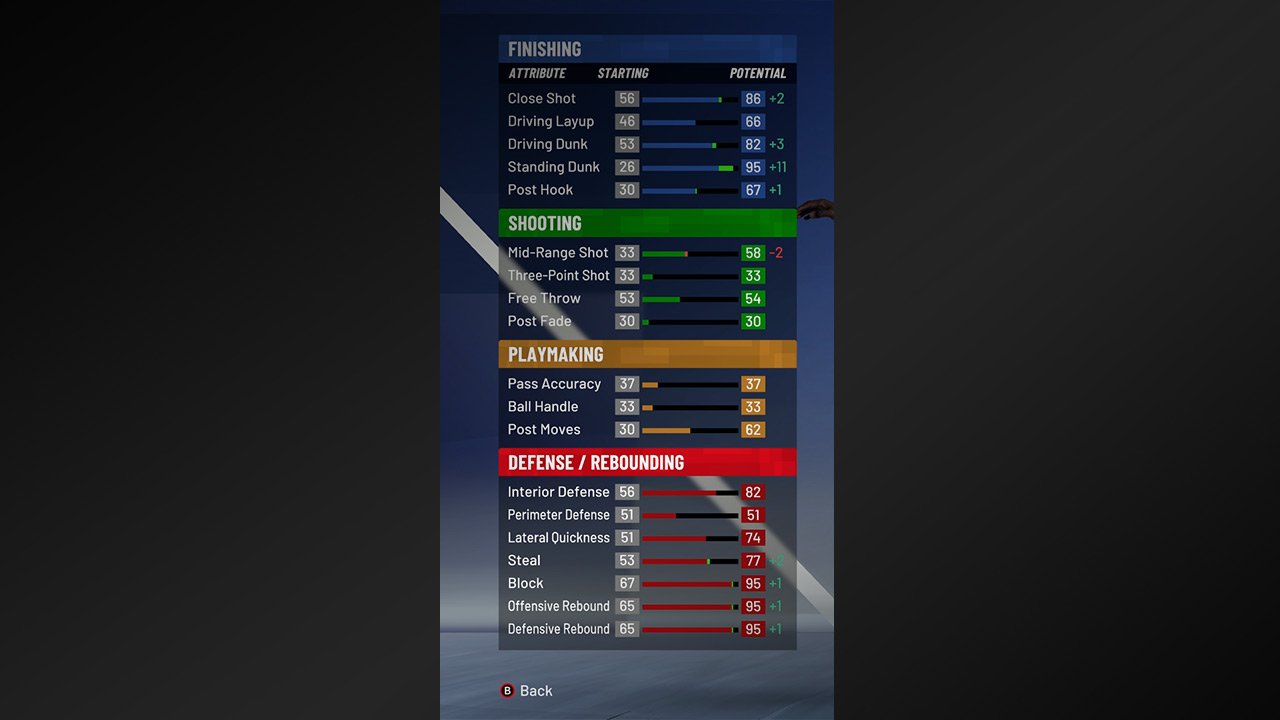 At this point, the choices that you’ve made will give you maximum potential levels for your player in different attributes within the Finishing, Shooting, Playmaking, and Defense/Rebound categories.  Depending on how you allocate your points you will be able to unlock a different number of badges for your player. The final step to creating your character asks you to set their body type, weight, height, etc.  Changing these can drastically change your potential higher or lower depending on how far you skew away from the default height and weight for your position.

Putting it all together

Depending on the type of player you want to build, changing your attributes will make things possible or impossible for your player to do.  Changing things like Wingspan, Weight, and Height will allow you to speed boost (or not), get contact dunks (or not), and more.  Depending on what you choose to put points into will give you the option to get more badges on a created player.  Badges are certainly the differentiator between good 2k created players and average players.

Your Takeover is the final piece of the puzzle and it will ultimately come down to personal preference when it’s time to pick your Takeover.  Whichever suits your play style is the one that you’ll want to pick.  However, when making a pure player like a Pure Sharpshooter or Glass Cleaning Forward, you should probably pick Lockdown Defender or Glass Cleaner as your Takeover just to get any associated boosts to your build.

My Player builds can be good or bad, but it really depends on who is controlling them.  While the builds below have worked well in our hands, they might not mesh well with your playstyle or habits in the game.  That’s why it’s important to note that you can feel free to experiment with these players adding or removing attributes when creating.  Perhaps you like the core build, but want more finishing badges (for example’s sake) or want something slightly different.  These builds are not set in stone, so experiment with them to see what feels good on the court to you. 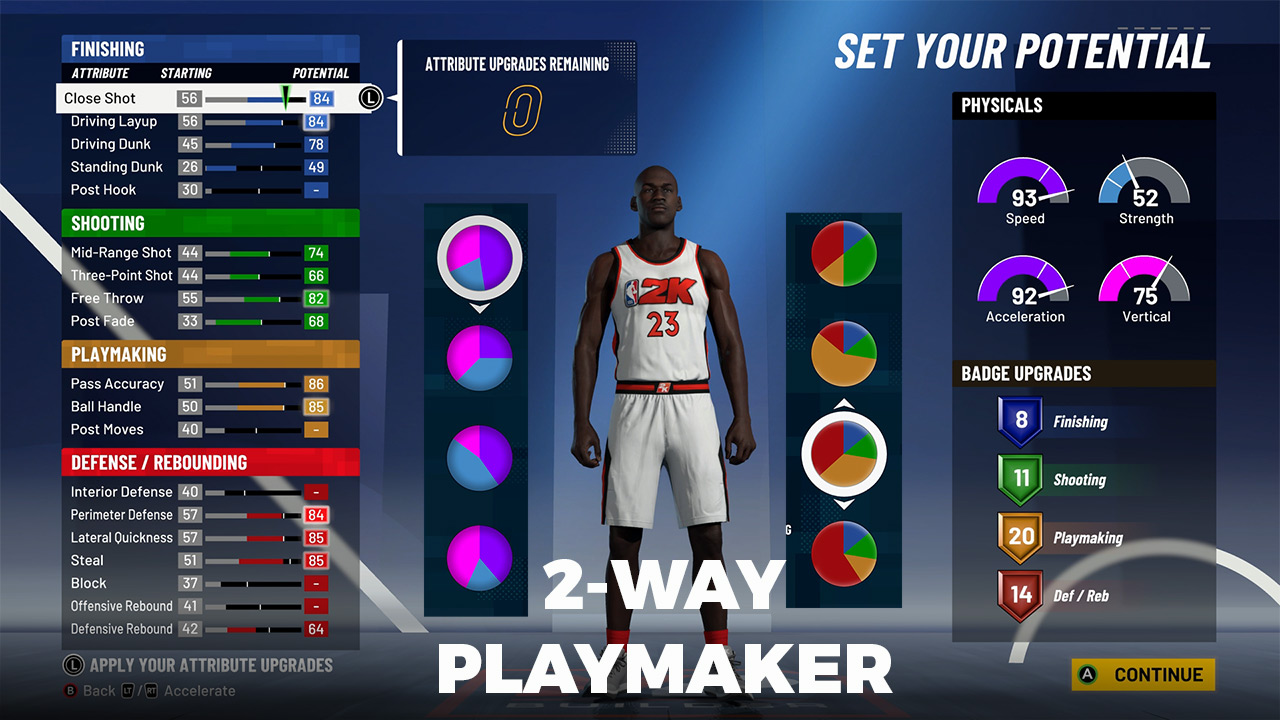 The Two-Way Playmaker is a good build that feels well rounded on the court.  As the name denotes, “2 Way” means that this player is equally capable on the offense and defensive side of the ball with ample badges unlockable for Defensive/Rebounding/and Playmaking.  This build will allow you to make plays, with enough shot points to allow you grab 10+ shooting badges which can keep you potent on the offensive side of the game.  While the low part of your game will be in the finishing department, your driving layup and dunk should be enough to keep you relevant in the paint.

Once you get to the physical attributes end of this equation, you’ll likely want to experiment with your weight and wingspan.  However, we suggest you keep your height at 6’5 low weight and high wingspan. 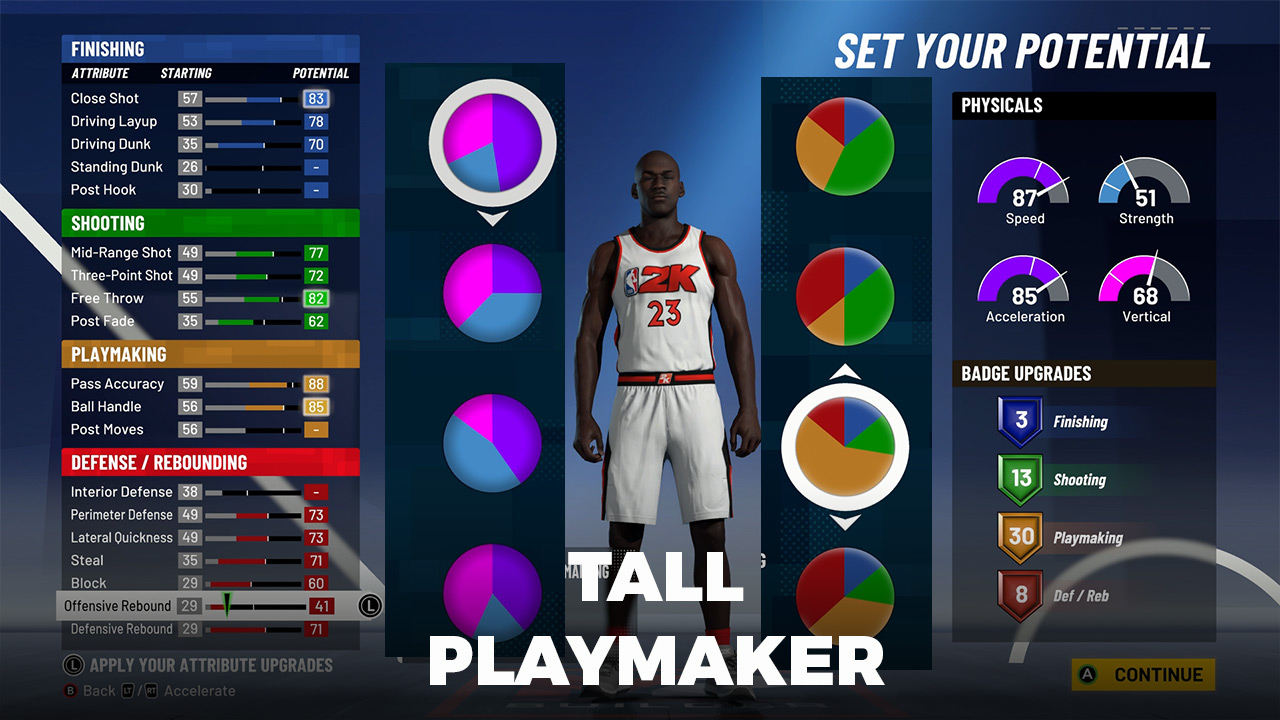 This Playmaker Build is deadly because of the player’s size.  You’re going to be making a 6’6 6’7 Small Forward.  This player is going to be getting their own shots consistently with 30 Playmaker Badges and ample shooting badges as well.   As always, these builds can be tweaked if you’d rather have a few less playmaking badges and more shooting or more defense. 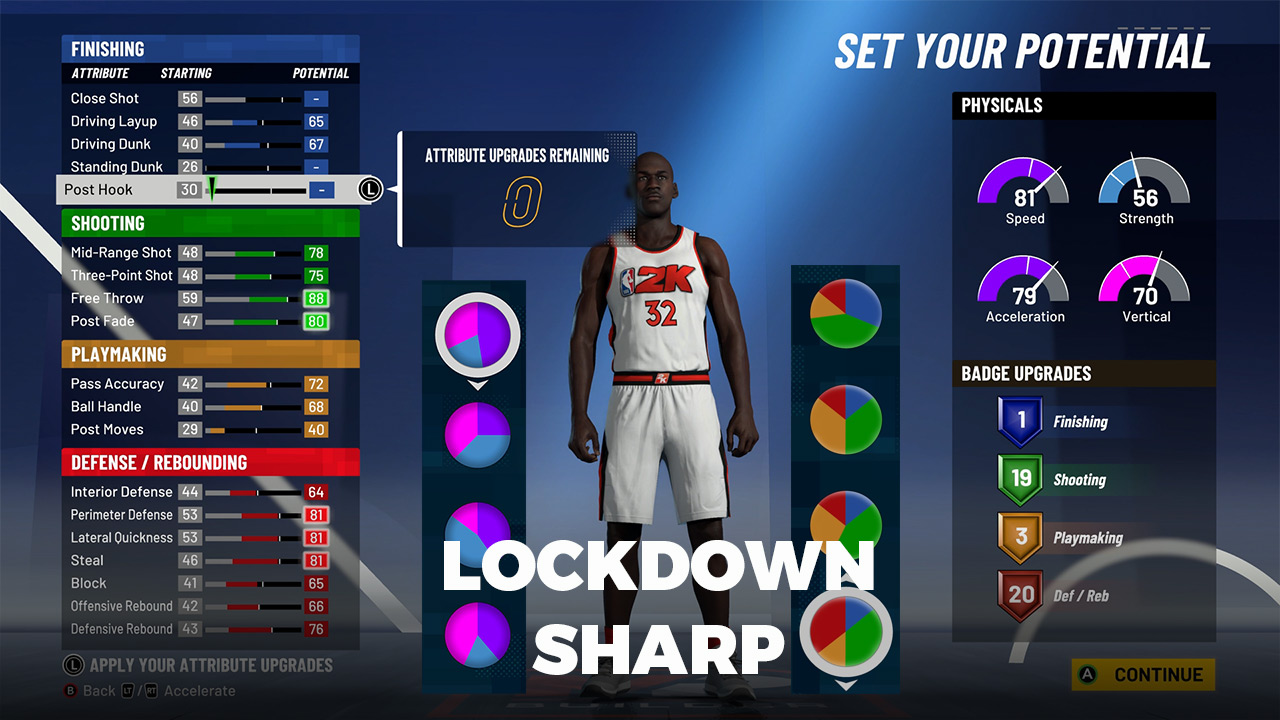 Want the best of both worlds?  Good on Defense and Good at Shooting?  The Lockdown Sharp is a competitive build that is equally proficient on both sides of the floor with 20 Defensive Badges and 19 Shooting. 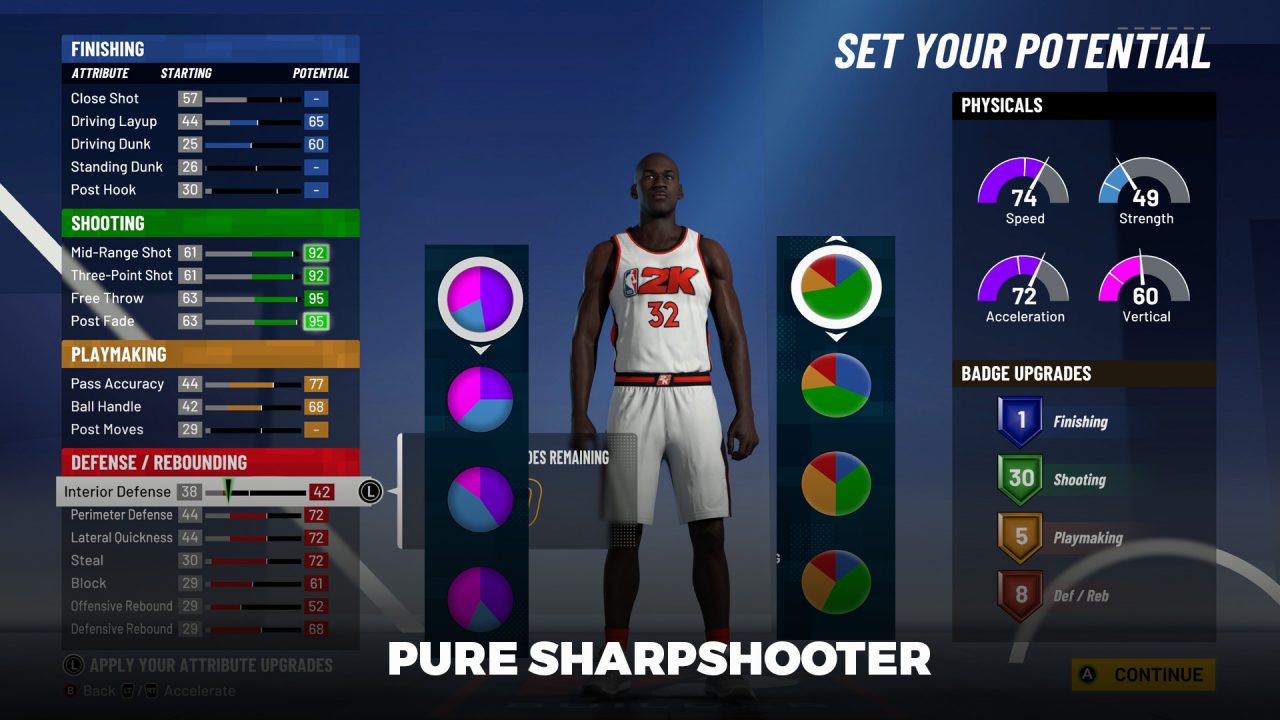 If you’re looking for pure shooting than you should definitely try to make the Pure Sharp build.  As you would imagine this is a heavy green build that will afford you 30 Shooting Badges and all shooting stats at 90+ when you reach 99 overall.  This will be a deadly shooter in almost any situation with some ball handling skills to get open on their own.  The Sharpshooter build can be varied a bit to make Playmaking Sharps, Lockdown Sharps, and more.  However, if you want the Pure Sharp put all the points into your shooting and then rain jumpers on your opponents. The Power Forward and Center positions in 2k basketball is a dying art, but it’s still very necessary on a five man team.  A dominant big man can crash the boards and this build will focus exclusively on cleaning the glass.  To do this you will sink all your points into the Defensive and Rebounding Skills and end up at 95 Overall in Offensive and Defensive Rebounding.   Physical attributes can be changed to increase some of these stats even further.  While it’s nice to have a taller center or power forward, it’s probably beneficial to keep their height down around 6’9 or 6’10 so their speed doesn’t suffer. 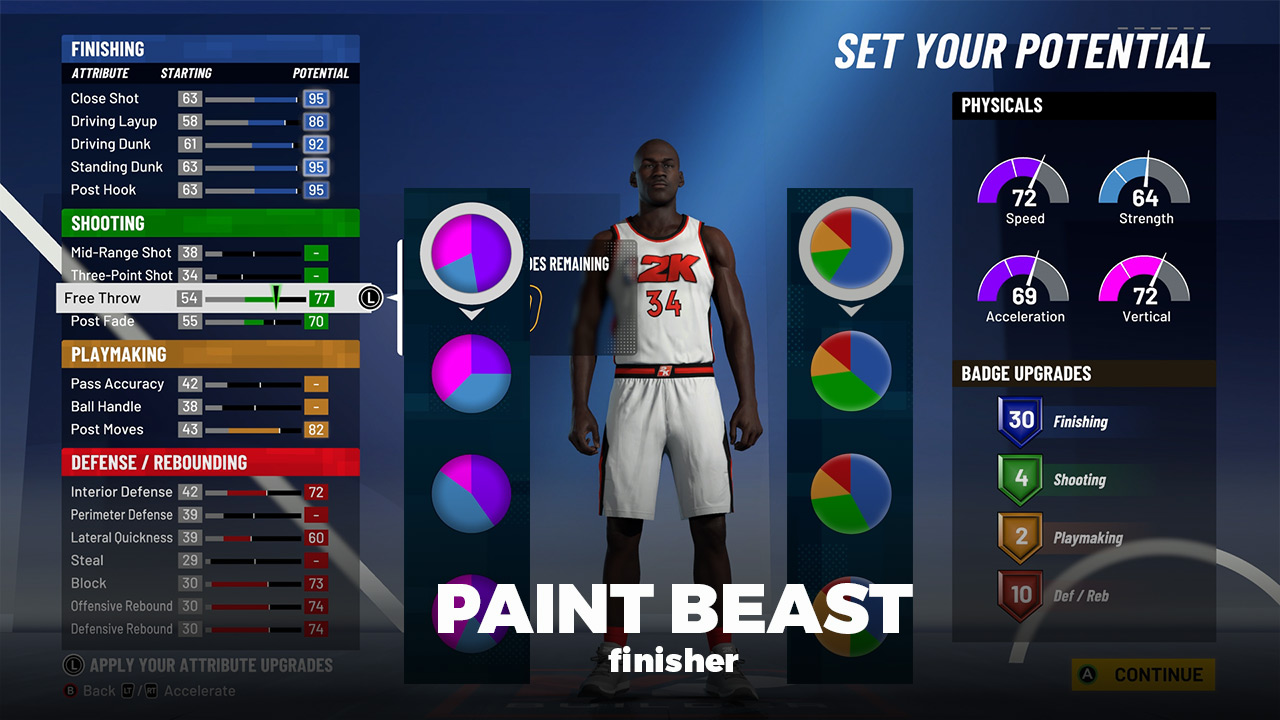 If you want an idea of what the Paint Beast is, it’s Shaq in the 90’s.  Perhaps a little bit smaller than Shaq, but who isn’t.  The Paint Beast is an in the paint finisher that has 90+ potential for all dunks, close shots, post hooks, as well as respectable overall post moves.  30 Finishing badges will allow you to finish in almost any situation.  The Paint Beast will live and die in the paint, this will not be a player that has a versatile game in terms of shooting outside of the paint.  This one dimensional player will simply try to overpower those in the lane.