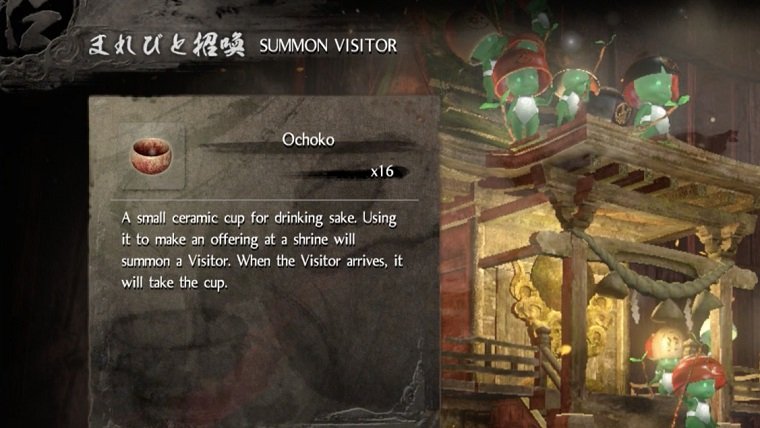 Nioh is usually an adventure that you have to take on your own, but the game does offer ways for you to bring others along for the ride. That’s done by using items called Ochoko Cups, which you offer at a Shrine in order to summon another player. They aren’t the most common items that you’ll come across, however, and this guide will help you get them more easily.

You’ll acquire Ochoko Cups as you progress through the game, as you’ll find them in treasure chests and some of the game’s side missions will offer them as rewards. However, there is a much more reliable way to get them, and that is through fighting the game’s Revenants. Revenants are the spirits of those who have fallen in battle, and you’ll be able to fight them by interacting with their many graves that are marked with a red light and a sword in the ground throughout the game.

As you approach the Revenant’s grave you will be given information on the character you’re about to fight, such as their level and name. These enemies might be real players like you, though other times they are just placed by the developer. However, if it is a real player it is not a live fight, as it just uses that character’s stats and controls it from there. If it looks like you have a good chance of taking the Revenant down in battle, then hold the circle button to initiate the battle.

You won’t get an Ochoko Cup from every Revenant that you defeat, but you’re more likely to get them from enemies that are more powerful than you. While you won’t want to try and take on an enemy that is much more powerful than you all the time, try and look for ones that are a little above your level to take on regularly. There is a better chance of getting them from very high level Revenants, however, so if you’re feeling gutsy then go after one of those every now and then.

That’s all you really need to know about farming Ochoko Cups, as you’ll just want to hunt down Revenants every chance you get in order to acquire them. Just be sure that you initiate the battle once the room you’re in is cleared of enemies, as it’s entirely possible that other enemies will join in and dramatically decrease your chances of success.