Nioh Guide: How To Get & Use Emotes With Gestures 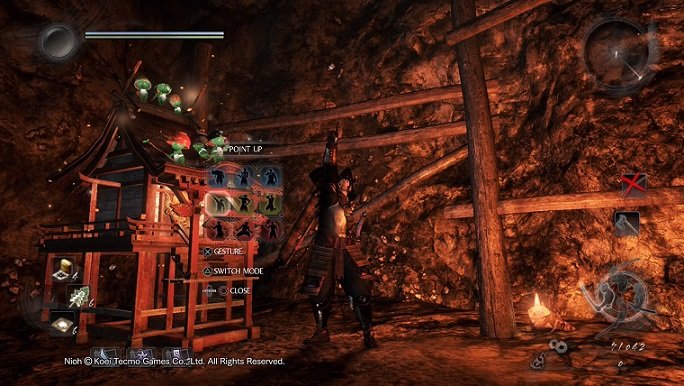 Sometimes when you’re playing Nioh you’ll want to have your character emote after a victory or as a means of greeting a fellow player, and the game allows you to do just that with Gestures. The game starts you off with 18 different gestures for you to play around with, though there will be more that you’ll be able to get throughout the course of the game. This guide will show you how to pull off these cool little emotes, as well as how you can get more of them when you’re bored of the ones you have.

In order to perform a Gesture, start with pressing the options button to bring up a grid with nine preset gestures. You’ll find that the Gestures are separated into three color-coded categories, which are blue, yellow and red. All you have to do to perform one is to highlight the one you want to use and then press x. However, if you want to swap out one of the preset Gestures for one of the ones in reserve, just highlight the one you want to switch and press triangle to swap it with one of the others.

While these emotes can often be a silly way to interact with other players, they actually have some important gameplay uses in the game. The first is when opening some of the large chests that you’ll come across as you journey through the game. When you open one of these chests a mirror image of your character will appear, and it will perform a Gesture that you must quickly replicate. If you perform it in time then the doppelganger will be happy and reward you with a new Gesture, but if you fail then it will attack you. Don’t worry if you fail the first time, as you can just go back to a Shrine to reset it and try again another time.

The other time when Gestures come in handy is when dealing with the mimicking stone walls, which you’ll occasionally stumble upon during a dungeon. You’ll know it’s one of these walls when you see large eyes appear, which will watch you as you move around. If you try to break through the wall it will get angry and initiate a battle with you, but if you perform a Gesture you will please it and it will let you through. The Gesture you have to perform is related to the color of it and not any specific one, and there’ll be clues you’ll need to look out for to figure out what the right color is.

You’ll also be able to buy new Gestures from the Trade section of the Hidden Teahouse once you’ve unlocked it, though that comes later in the game. Purchasing these Gestures uses glory instead of gold, and they vary in price. Not every single one of them is essential unless you’re going for the Gesture Master trophy, but ones like the Tea Time or Bring It On! poses are well worth picking up. It’s all about finding the ones that you like the most, and then showing them off in front of your friends… or taunting an enemy with one if you’re feeling courageous.

Home / Game Guides / Nioh Guide: How To Get & Use Emotes With Gestures