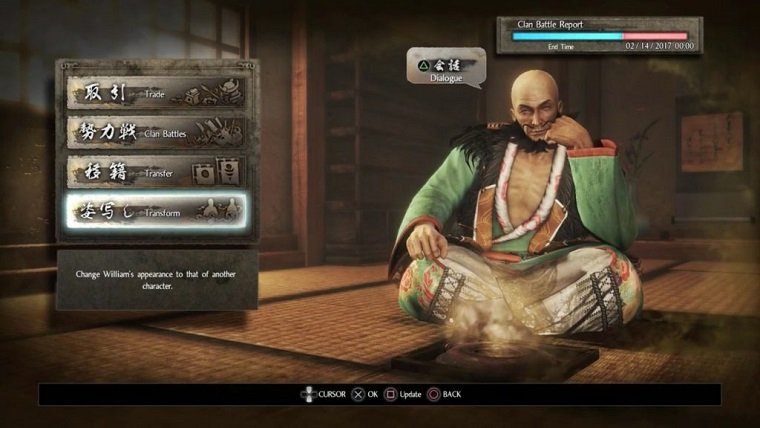 There are certain features in Nioh that can’t be accessed until you’ve progressed to a certain point in the game, and one of those features is the Hidden Teahouse. It’s locked at the start of the game and takes awhile before you can finally access it, though this guide will show you how to unlock it.

You will unlock the Hidden Teahouse upon the completion of the Spider Nest Castle mission, which is in the Kinki region. You’ll be fighting a giant spider demon boss called Joro-Gumo, and after you take the boss down you will meet a clan merchant named Danjo. Danjo will use his magic to bring you to the Hidden Teahouse after the scene ends, and from that point on you will be able to access this location anytime you like from the menu.

As for what Danjo can do for you, he will allow you to switch clans to the one that best suits your playstyle, as well as tracking the progress of clan battles. However, he also functions as a merchant and has a variety of interesting things to sell you, such as transform skins, crafting materials and gestures. You can also purchase equipment that hasn’t been identified, meaning that the stats of the item you’re buying are unknown. This means that you could purchase a piece of equipment that ends up having fantastic stats, or a piece of equipment that has abysmal stats. It’s a risk, but it’s worth giving it a shot every now and then.

Finally, how you will pay Danjo is not with gold, but with glory. Glory is the currency that you will acquire by finding and defeating the game’s revenants, which are marked with red glowing graves throughout each of the game’s levels. Not every single one of these enemies will reward you with glory, but you have a better shot at getting this currency when defeating enemies that are a higher level than you are. Just make sure that the enemy isn’t too much higher of a level than you, as these enemies can put up quite a fight even when you’re of a similar level.