Overwatch 2: How to Unlock Junker Queen’s Cute and Pixel Sprays

The latest news in the world of video games at Attack of the Fanboy
October 4th, 2022 by Tom Cunliffe It is a tradition that every hero has an unlockable ‘Cute’ and ‘Pixel’ Spray, which are awarded for pulling off impressive feats with specific characters. With three brand-new heroes — Kiriko, Sojourn, and Junker Queen — Overwatch 2 adds even more Sprays to add to your collection. In this guide, we will be detailing how you can unlock Junker Queen’s Cute and Pixel Sprays in Overwatch 2.

Junker Queen’s ‘Cute’ spray is obtained by completing the ‘Coup De Gracie’ achievement, while her ‘Pixel’ spray is tied to her ‘Adrenaline Junkie’ achievement. Before we begin delving into further detail, we recommend reading our guide on Junker Queen’s Playstyle to gain a better understanding of her Abilities. If you’d like even more Sprays to add to your collection, we also have guides on how to obtain Kiriko and Sojourn’s Cute and Pixel Sprays! To unlock Junker Queen’s ‘Cute’ Spray in Overwatch 2, you will need to earn the ‘Coup De Gracie’ achievement, which can be earned by using Jagged Blade and Carnage to pull and kill an enemy in Quick Play or Competitive.

‘Jagged Blade’ is Junker Queen’s secondary fire, which launches her knife, Gracie, at an opponent. On a successful hit, Gracie will stick into the enemy and allow Junker Queen to pull them towards her when her secondary fire is pressed a second time. ‘Rampage’ is another one of Junker Queen’s abilities, which damages enemies with melee range and applies ‘wound’. To earn Junker Queen’s Cute Spray, you will need to combine these abilities together. It is best to perform this combo on a character with low base health that cannot quickly escape from a pull, such as Moira or Widowmaker that have their abilities on cooldown, or D.va outside of her Mecha. Sombra’s ‘Hack’ can also be extremely useful for disabling movement abilities, so feel free to ask a teammate for their help! 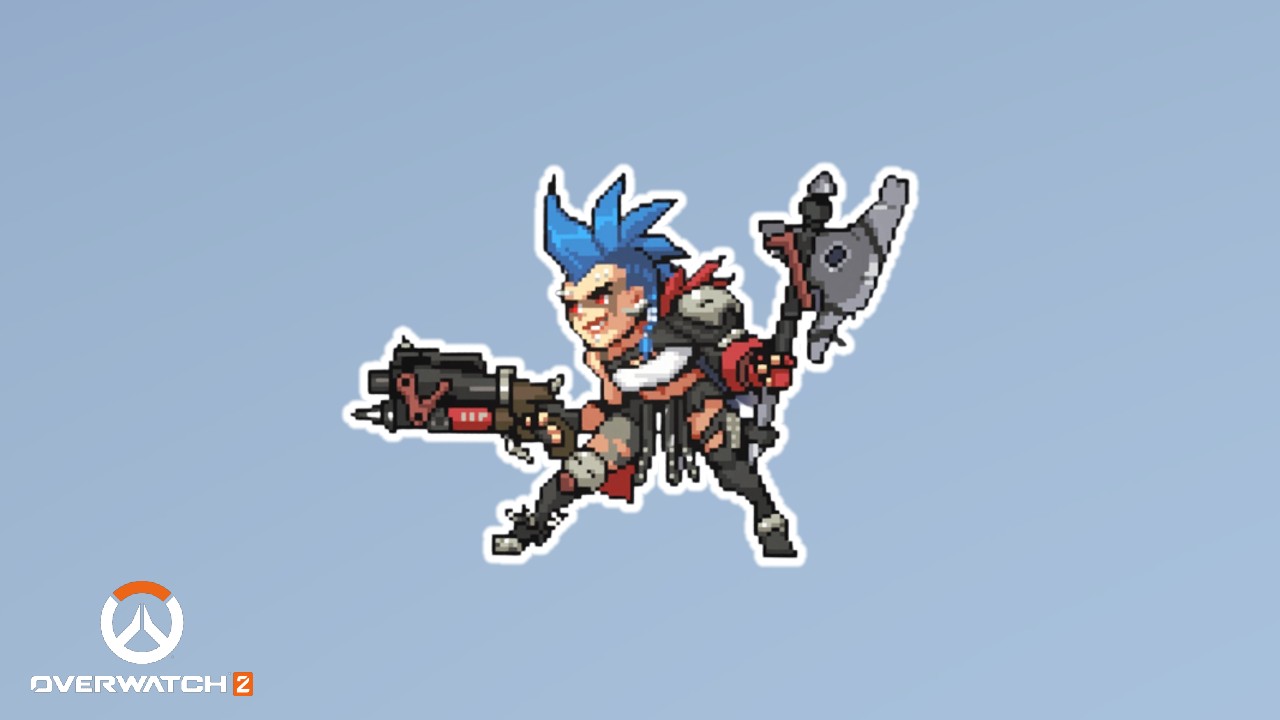 To unlock Junker Queen’s ‘Pixel’ Spray in Overwatch 2, you will need to earn the ‘Adrenaline Junkie’ achievement, which can be earned by having 7 wounds active on enemies simultaneously in Quick Play or Competitive.

You will need to use Junker Queen’s Ultimate ability, ‘Rampage’, to inflict as many wounds on enemies as possible. You will then need to follow this up with her ‘Carnage’ ability. The more enemies hit, the more wounds are applied at once, so you will need to wait until the enemy team is bunched up together. Zarya’s ‘Graviton Surge’ or Mei’s ‘Blizzard’ can be extremely helpful for this, along with Lucio’s ‘Sound Barrier’ and Zenyatta’s ‘Transcendence’ for survivability. You can also use your Jagged Blade to inflict a wound upon an enemy that is further away and won’t be hit by your ultimate.

Attack of the Fanboy / GAME GUIDES / Overwatch 2: How to Unlock Junker Queen’s Cute and Pixel Sprays