I've got a few tricks. Kiriko is the newest healer and character in Overwatch 2 and she is ready to fight. She brings to the table a cleanse for allies and some very damaging kunai. While Kiriko doesn’t have the greatest healing output of all the supports, she is an excellent pick if you like to back up your team with some damage and stand a chance when you are alone. Let’s go over Kiriko’s abilities and who she pairs well with in Overwatch 2.

Since Kiriko is a ninja, like Genji and Hanzo, she has the Wall Climb passive that will allow you to climb up any wall. This is great for getting up onto the high ground quickly as well as letting you scurry out of tough spots you may find yourself in. You could also choose to use her Swift Step ability to get yourself out of a bad spot since it will allow you to teleport to an ally within range. While the range of the ability is not massive you don’t need a direct line of sight, so you can use it to get away from enemies or to get yourself back into the fight when you respawn. 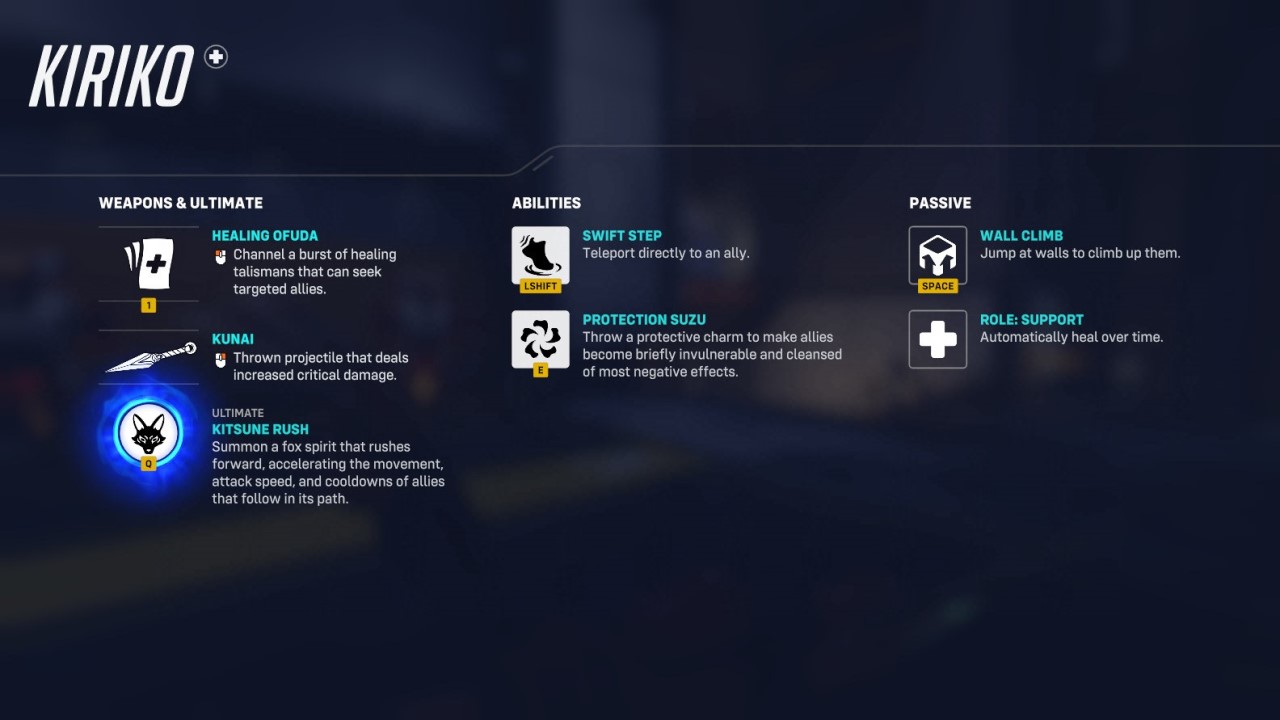 Kiriko’s healing is a bit lackluster with her ability to throw Healing Ofuda talismans that will seek toward the ally you aim them at. She can throw out five at once but they don’t heal for very much. Luckily, they recharge quite quickly after you finish throwing them.

On top of her talismans, Kiriko can also throw out a Protection Suzu that will grant any ally within its range invincibility for a few seconds and cleanse them of most debuffs. Kirko can also benefit from the Suzu as long as she is within range.

Her Kunai makes up for her lackluster healing as she can deal a lot of damage with these thrown weapons. Kiriko can hold up to 12 and they pack quite a punch, giving her the ability to two-tap most DPS characters if she hits them in the head.

Finally, Kiriko’s Ultimate Kitsune Rush is a great fight-starting tool. Kirko sends forth a fox spirit that will leave behind a path that provides a speed boost, attack speed boost, and cooldown reduction for any allies in it. These effects also apply to Kiriko, allowing her to quickly throw her kunai and her talismans.

Since Kiriko doesn’t have a great healing output, your team’s second healer will want to be someone that can make up for the low output. Someone like Mercy who can heal up single targets quickly, or Moria who can heal a group of injured allies quite well are good picks. Tanks with shields like Reinhardt or Sigma can work well with Kiriko as they can put up their shield when their health gets low, allowing Kiriko to heal them back up before they get back into the fight.

Kiriko can’t really heal any dive DPS well since her healing depends on having a line of sight when firing them, so heroes like Soldier: 76 and Bastion will work well with her. She can also work surprisingly well with Pharah since her healing talismans will tack after being fired. All Kiriko needs to do is aim at Parah up in the air and let the talismans fly, they will eventually hit their mark.

Kiriko Playstyle and Strategies for Overwatch 2

You’ll want to stay pretty close to your team as Kiriko since you don’t have the greatest survivability. You’ll want to keep your eye out for teammates that split off from the main group since if they get caught out you can quickly teleport to their side to help them win their fight or get them out. You can either use Kiriko’s Suzu to keep low-health allies alive and give you a chance to heal them or to try to prevent everyone from getting burst down by an ultimate.

Make sure to coordinate using your ultimate with the rest of your team as it doesn’t do much without anyone to capitalize on it. You can also throw it down in the middle of a fight your team is losing to try to give them the edge and throw off the enemy’s aim when everyone starts to move quickly.

That covers the basics of Kiriko in Overwatch 2. If you are interested in playing another hero consider checking out our Bastion hero guide. Make sure to check out our other Overwatch 2 guides if you are ever confused with something in the game.