PS4 Pro Guide: How to Transfer Your Data from Old PS4 to PS4 Pro

The latest news in the world of video games at Attack of the Fanboy
November 10th, 2016 by Kyle Hanson 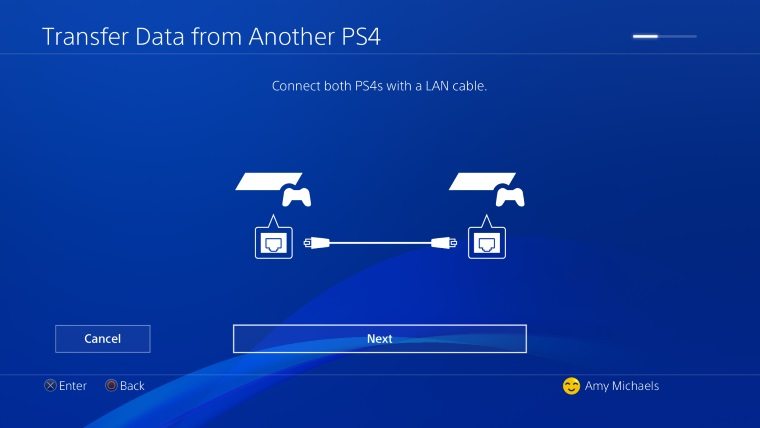 The PS4 Pro hits stores today, with likely millions of gamers picking up the new, upgraded console. Some of these buyers are first time owners, jumping into the PS4 environment for the first time. However, others are looking for an upgrade, jumping from the original PS4 to its new big brother. If you’re in that latter group, you are probably wanting to know how to transfer your data from the old PS4 to the PS4 Pro. Luckily, Sony has put out a guide for this, which we’ll summarize below.

First, make sure everything is up to date. Power up your PS4 and force it to check for updates, going through the install if one is available. You should be on at least PS4 version 4.0. While doing this, you should be connected to the internet and signed into the PSN, but make sure you do so if you skip the update step.

Now make sure the PS4 Pro is connected to the TV. The regular PS4 needs to be on, and connected to the network, but you don’t need to see what it is doing, so you can leave it unconnected to any video source. Still, make sure both consoles are online and signed into your PSN profile.

When signing into the PS4 Pro, it should detect that this is a first-time login and ask if you want to transfer data, obviously select yes. Follow the on-screen prompts which should have you press and hold the power button on your old PS4 until you hear a beep to start the transfer.

You now want to hook the PS4 up to the PS4 Pro using an ethernet cable. Instead of plugging them into the wall, just run the cable directly between the two consoles. This may work if both are hooked to the same router, so just use your own judgement. A menu should then pop up, letting you select which data you want to transfer. Do so, and choose the PS4 Pro as your primary console.

That’s pretty much it for how to transfer your data from the old PS4 to the PS4 Pro. The process might take a while, if you’re moving a lot of large files. Give it time and be sure to check that everything was moved properly once it is all done.