Remnant: From the Ashes – How to Beat the Undying King

Don't let him heal or this could be a long fight. 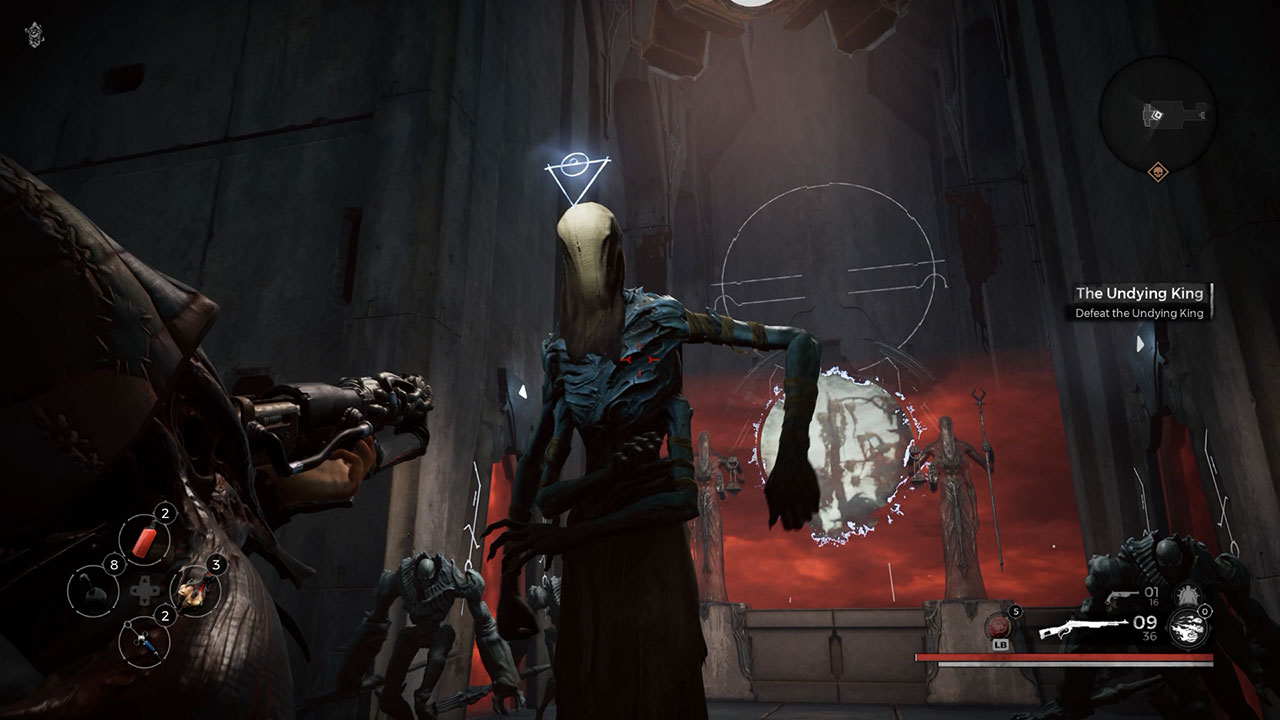 The Undying King is one of the toughest challenges that you’ll face in Remnant: From the Ashes.  When you meet the king he’ll send you on a mission to fetch the Swamp Beast’s heart in order to get a key for the Labyrinth.  In this playthrough we choose to not give the Undying King the heart of the beast, and are forced to fight him to get the Labyrinth key.

The Undying King has a number of different attacks that you need to look out for, and a ton of minions at this service.  The boss can summon minions from the sides of the room, summon turrets that shoot you from the air, and will from time to time also summon a pair of scythe to attack you with.

The best course of action is kill the easiest stuff first.  The easiest targets are the turrets that he summons.  Each time that turrets are summoned you should take them out, or they will constantly barrage you with long-range shots any time you are in view.  Next, the minions.  The Undying King will summon numerous minion types which have both ranged and melee attacks.  It’s easy to get overwhelmed when there are too many of them on screen.

Try not to let him heal too much

Most importantly, is the Undying King’s melee attack.  This melee attack is dangerous because the king is constantly stalking you when he’s got his scythe in hand and can close the gap between you by jumping at you and then doing a three part attack that is hard to get out of once it’s started.  What you’ll want to remember when the king attacks is to roll into him instead of away.  Your goal is to get behind him on the initial attack.  If you do, he won’t be able to hit you.  While your first instinct may be to try and roll away, roll towards him and you’ll be in much better shape.

Over time, he will eventually put away the weapons and go back to summoning.  Get in shots on the king while taking out the minions and you’ll eventually get his health down to around the halfway point.  At this point the Undying King will try to make his way back to the throne to heal and he’ll spawn a group of fast moving minions to try and keep you busy while he does.  Try to position yourself near the throne so that you can still shoot the king while also shooting the minions as they come.

Once you take the King’s health all the way down the first time, he’ll regenerate some more and then you’ll need to do this original process again.  Take his health down all the way the second time and that’ll be the end of the fight.

Home / Game Guides / Remnant: From the Ashes – How to Beat the Undying King