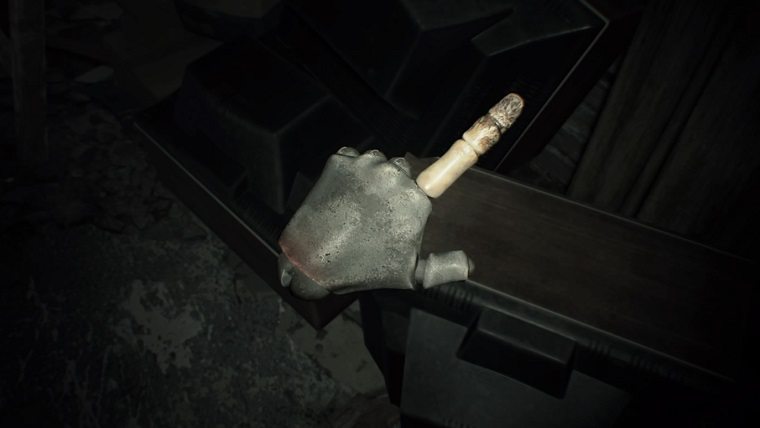 The Resident Evil 7 Beginning Hour demo recently got a “Twilight Update” following the new trailer that was shown off at the Tokyo Game Show, and it makes some pretty big changes to the demo. While we’re still trapped in a creepy house, the update has expanded upon it and there are now new locations and items to discover. Some items from the first demo now have a use in the update, but there are also new items that once again do not seem to have a use yet.

We’ve been scrounging around the updated demo looking for everything we can find, and so far this is what we have found that is new:

The attic got a renovation

While creepy mannequins were one of the things that awaited you upon venturing up into the attic, after placing the fuse in the breaker box this time results in a loud bang happening as you walk up the stairs. Upon further inspection, you will find that there is now a gaping hole in one of the walls that allows you to explore a new area.

The Dummy Finger finally has a use! …sort of

One of the biggest mysteries of the original Beginning Hour demo was that confounded dummy finger that you found in an open drawer in the hallway off of the kitchen. It had absolutely no use in the demo and it left everyone struggling to find out what to do with it. Well, with this new update it now attaches to an “Object Made of Celluloid” that you find in the new attic room behind the pile of TVs.

This “Object Made of Celluloid” is in fact a dummy hand, but the only problem is that once you attach the dummy finger to it nothing else happens. There has been no purpose found for this new dummy hand with attached dummy finger, so really we’re right back to where started.

Creepy writing on the wall

Further inspection of the attic will eventually lead you to a wall that appears to have writing written in blood. While that is creepy enough, the message itself says “Five guests murdered, but where is unknown. Nothing to point to their final gravestones.”

In the opening moments of the demo there was a portrait over the fireplace that featured Jack and Marguerite Baker, though after the Twilight update it has changed. It now features a picture of them in their younger days with their children.

That door looks different, too…

Immediately following your exit of the starting room you will remember that there was a door to the right that could not be opened. Well, it still can’t be opened, but it is now covered in mold. Better yet, if you scurry on over to the door and stare at it it for a bit, you will hear some creepy sounds followed by some loud door rattling. There’s definitely something on the other side, but for now it’s a mystery.

The sofa is missing

A small difference, but one of the sofas in the starting room has magically vanished. Hmm…

The original demo only gave us the most vague sense of combat in the form of the axe, though seeing as it was completely useless we couldn’t really use it on anything other than to break crates. However, if you use that axe to break the crate with yellow tape around it or look under the bed in the new attic room you will find the series’ tried and true handgun ammo. There’s no gun to actually use the ammo, but it’s a start!

If you check the table in the corner of the new attic room you will notice that there is a brand new key called the basement key. Unfortunately, that’s all there really is to say about it as it doesn’t seem to have a use yet.

While you could get a few different phone messages at the end of the original demo, there is now a new one waiting to be heard. The same female voice is waiting on the other side, though this time she says something about how all the doors can be opened, but some of them must remain closed for now.

Once the demo comes to its face-punching ending you will notice that there is a new end card. This one reads “The end of the path is near,” which certainly seems like it’s suggesting that another update to this demo is coming at some point.

This is everything that we’ve discovered so far, but in no way are we claiming that this is all there is to see. We’re still snooping around the demo ourselves to see if we can find anything else, and if you happen to come across something that isn’t listed here then don’t hesitate to leave it in a comment below!