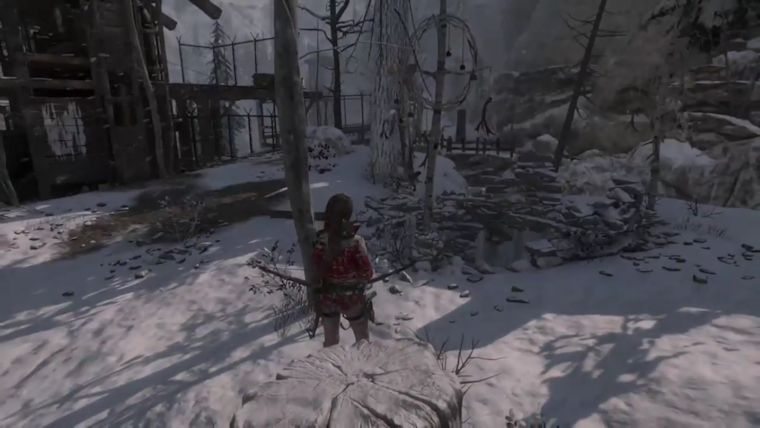 Rise of the Tomb Raider definitely improves on its predecessor in a number of ways, namely the more involving tombs found throughout. These are offered as sidequests and the various locations in the game usually have one or more of them.

We already told you about the Ice Ship optional tomb from the Glacial Caverns, but now it’s time to jump into the next one in first in the Soviet Installation area of the Siberian Wilderness called the Ancient Cistern.

There are technically two other tombs here as well that can be accessed partially, but you will have to wait and come back later with upgraded weapons on a few.

This tomb is certainly harder to find than the Ice Ship, as you have to break your way in and then advance further down in an area to get there. Out in the Soviet Installation area, you will find a giant crane near the construction style area.

Look at the end of the crane that is holding something above what looks to be some breakable wooden boards. Your first thought might be to try and climb up the top of the crane to knock something off, but that is impossible. Instead, simply look up at the item the crane is holding and shoot the area about it to cause it to fall and break through the boards, giving you entrance to the area.

You can climb down here or just jump down and take a little damage. At this point, jump down a few more ledges and start walking in the rather linear cave. There are some collectibles for you to find here if you wish, so I recommend you keeping an eye out for some of those.

Keep going until you eventually come to a big gap that will lead to instant death if you go over it. However, you will notice what looks to be a climbable wall in front of you. You can use survival instincts to make sure you see it. Jump across and make sure to latch up and start climbing to the lower right of this group of rocks.

Here you will see another group of rocks to leap at to your right, so make the jump and latch onto that as well. Go to the bottom left of this patch of wall and leap to the left on to the solid ground.

Go up the stairwell here and you will see a wooden plank in from of you that you must jump towards and hold onto. This will move down and start two fans going below you. Position yourself well and when there is a gap between the two fans, press B to let go and you will fall in the water if you make it through.

Climb up out of the water and and go through a little hallway before you see more water and a vault looking door in front of you. Get your bow out and use survival instincts to see the explosive barrel by the door. Shoot it with the bow and swim through the door and you will officially be in the Ancient Cistern optional tomb in Rise of the Tomb Raider.

If you still are having some trouble finding your way into the Ancient Cistern tomb, you can check out our video below that shows the pathway to getting there in Rise of the Tomb Raider.