Rise of the Tomb Raider Guide: How To Beat The Bear 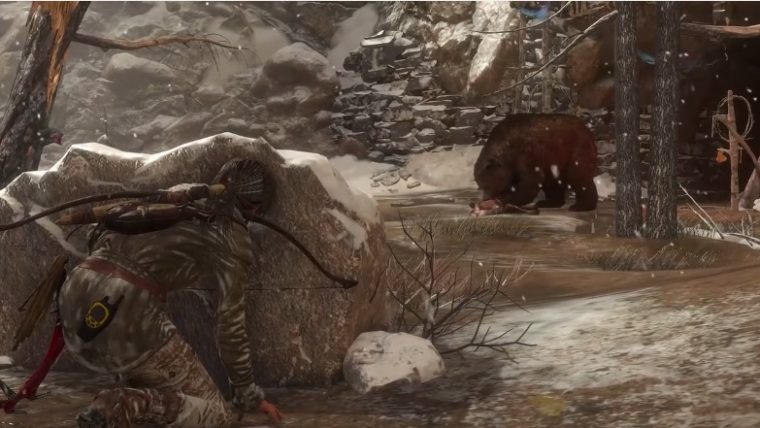 The first type of tough boss you will encounter in Rise of the Tomb Raider is a huge grizzly bear. You need to kill defeat it in order to progress, so this guide will help you in finally taking the big furry animal down.

At this point of the game, it’ still pretty early so Lara Croft does not have access to the shotgun yet. The best weapon in her arsenal at the beginning is her bow and arrow. The only type of arrows you have are poisonous darts. Make sure to craft a lot of poisonous arrows because you will be using a lot of them.

The bear is hiding inside a deep cave and the best way to beat him is to lure him out of there. When you first see him, try and walk slowly before he can hear you. Line up an arrow and try and shoot him in the face. Shooting him the face is the most effective way of taking him down.

However, one arrow is not going to cut it though. Once you shoot him in the face, he will be alerted and this is your signal to sprint like crazy out of the cave. If the bear manages to catch up with you, use Lara’s dodging technique by pressing the B button.

After you exit the cave, the bear will still be chasing you. The technique I used was exiting the way you came in. There should be an archway where the bear eventually stops. You can tell he stops when he stands up on his hind legs. After he does that, he runs back into the cave. 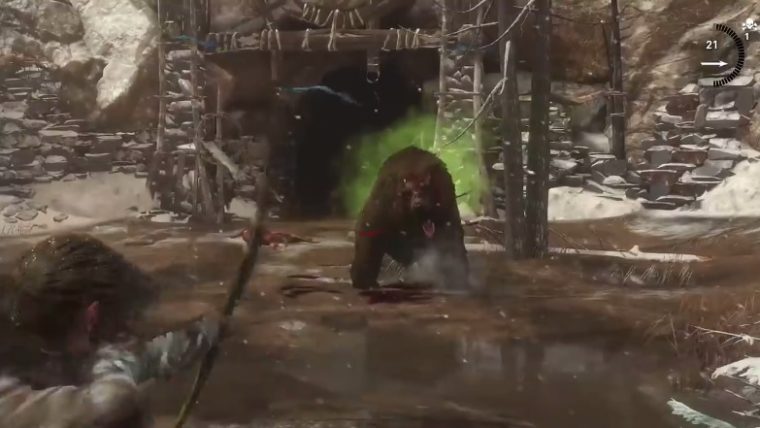 I used the moment when he stopped and stood up on his hind legs to shoot lots of arrows at him. This is the safest way to defeat him because he’s out of your reach. Don’t worry if you don’t take him out before he goes back inside the cave. You can always go back inside to lure him out again and do the whole thing all over again.

The first time I played Rise of the Tomb Raider, I think it took me several poisonous arrows to finally take him down. Just make sure to shoot arrows in his face because this is where he is most vulnerable. Don’t worry about running in and out of the cave multiple times. This strategy is safer than just taking him down head-on.

In closing, just lure him out of the cave and run like a chicken until he stops and shoot him then. The moment he stops momentarily is the best time you can shoot him with arrows. If you try and shoot him beforehand, this does not give you enough time as he will strike you down easily.

Anyway, I hope this guide helps you in beating the bear so you can progress further in Lara Croft’s journey in Rise of the Tomb Raider. Feel free to share your own ideas on beating the bear.

Home / Game Guides / Rise of the Tomb Raider Guide: How To Beat The Bear