Shadow of the Colossus PS4 Guide: How to Beat the 8th Colossus 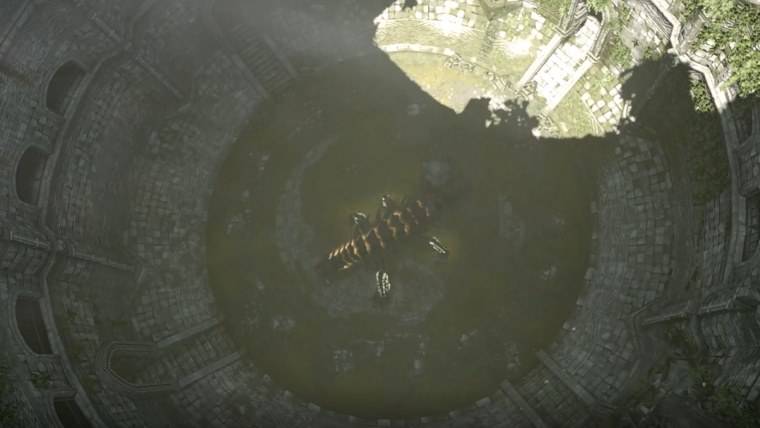 Charging toward the halfway point of the game, Shadow of the Colossus’ 8th colossus is a really interesting one to beat. Taking players into a coliseum of sorts, the battle is quite vertical and requires a few steps in order to reveal the vital glowing weak spot that you’ll need to attack. This lizard has some tricks up its sleeve though, so to help out we’ve got our guide on how to beat the 8th colossus in Shadow of the Colossus for PS4.

As you enter the coliseum the colossus won’t really notice your presence. He’s resting in the center of the building, deep underground and beneath where you enter. You’ll need to get his attention, forcing him to climb up the walls, which is key to uncovering his weak spots.

You can do this on the top level, but I personally prefer going a level or two lower before beginning. The higher you are, the more time you have, but it can also be more of a pain to get down to the colossus. No matter where you are, either whistle or shoot some arrows at the colossus to get his attention while higher up in the coliseum, then duck behind cover and start running to the other side of the building.

The colossus will begin climbing toward where you were when you got his attention, though he might shoot some poison gas at you, so watch for that and dodge if necessary. Once you are out of sight and the colossus has started to climb you need to have your bow ready. Once he’s high up on the wall you need to shoot out two of his legs. You should see glowing spots on them which you need to target. Once you hit two of them he will fall to the ground, but do it quickly because he can recover from the first strike.

Once on the ground his belly will be exposed. Make your way down as quickly as possible, jumping from the ledges if necessary, though be sure to do this from as low a level as possible. There are two glowing weak spots here that you need to stab to bring the 8th colossus down for good. Just repeat this entire process as many times as necessary, making sure to rush to the side areas and back up the stairs if the colossus starts to flip back over.

Shadow of the Colossus PS4 Guide: How to Beat the 8th Colossus

Home / Game Guides / Shadow of the Colossus PS4 Guide: How to Beat the 8th Colossus