Shadow Of The Tomb Raider Guide: How To Get More Outfits

Everything you need to know about getting new outfits in Shadow of the Tomb Raider.

Just because Lara will spend her time covering her clothes in dust and mud during Shadow of the Tomb Raider doesn’t mean you should avoid getting new ones. In fact, it’s highly suggested that you do (even if Lara will just dirty them up again)! Not only do many provide useful bonuses that can help during exploration and combat, but some just look cool.

Outfits come in three flavors: Full Body, Upper Body and Lower Body, and while you can’t tamper with Full Body outfits in any capacity, the Upper and Lower Body outfits provide the freedom to tweak the bonuses Lara receives whenever she’s at a base camp. 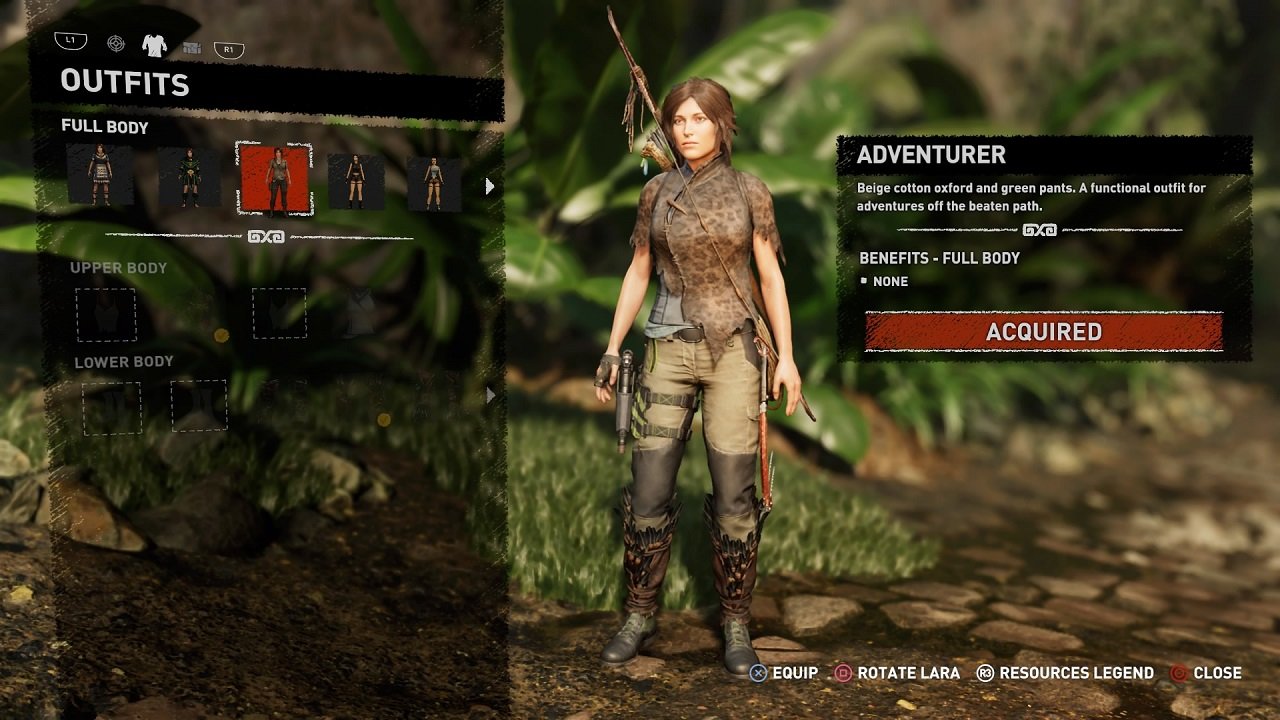 There will only be four at the start (a default and three classic Tomb Raider throwbacks), but you’ll eventually come across more as you continue playing. Here are some methods for finding more:

You won’t get as many through this method, but there are still a handful of outfits available through this method. Some will be obtained through specific fights, while others will be given to you as part of an event. One thing to take note of is that some of these need to be worn in order to talk to certain NPCs or be allowed in certain areas of a town/city.

Lara can use the money earned throughout her travels to buy an assortment of items from merchants, and among these items are outfits for her to wear. These aren’t necessary to the game in anyway, but they do provide some useful bonuses, like boosted EXP from hunting animals or increased resource acquisition, so they’re definitely worth your time. Do be aware, however, that some shops do have certain items that are of an objectively higher priority, like larger ammo and inventory pouches, so it’s suggested you get those first before anything else.

Though the ultimate goal of going off the beaten trail is to find hidden tombs and the unlockable skill that lies within, sometimes you might come across smaller crypts that only provide one or two challenges before they’re completed. Though they might not house the wonders that tombs do, they do often hold something that’s of comparable value: outfits. Of course, once you find them, there’s the small matter of getting out.

Before closing out, do be aware that you will rarely  be able to use a new outfit immediately — you’ll need to craft them first.

That’s it for outfits in Shadow of the Tomb Raider. You can easily make it through the game using the default and story-related ones, but there are some out there that provide some useful benefits if you wear them, so it wouldn’t hurt to try and look for some whenever you’re afforded the opportunity.

Home / Game Guides / Shadow Of The Tomb Raider Guide: How To Get More Outfits