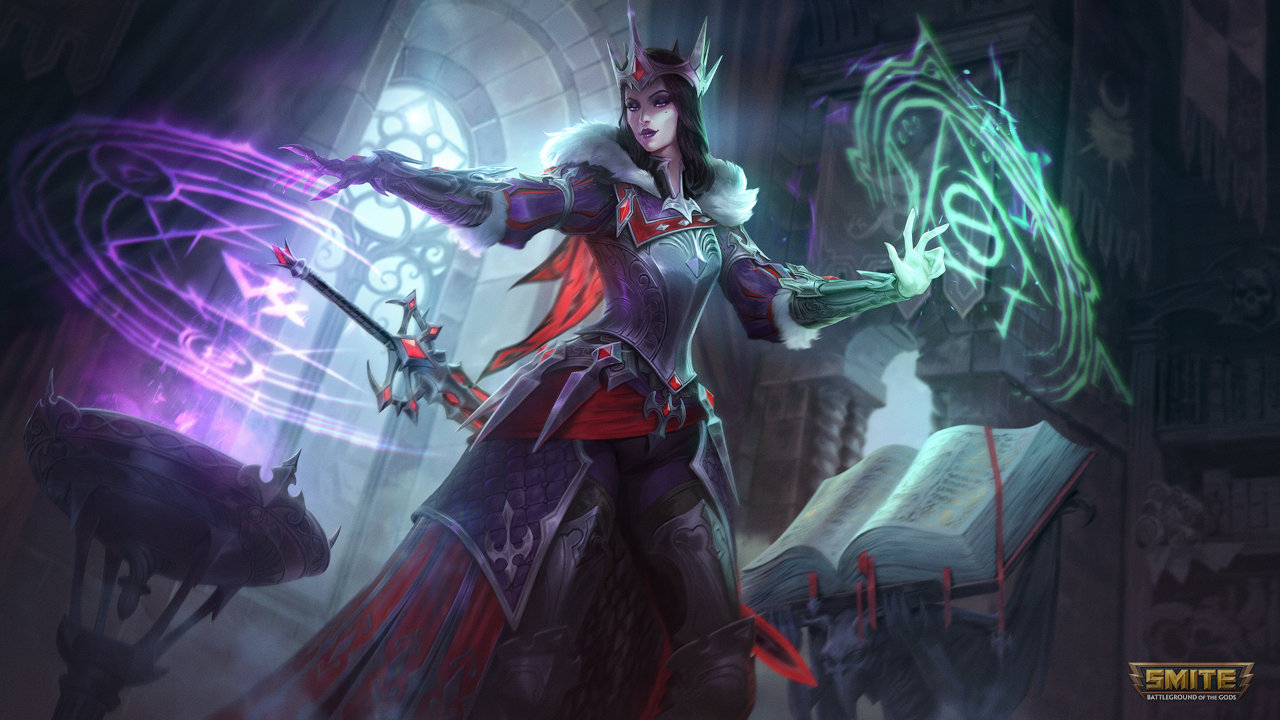 Update 11.82 has arrived for SMITE, and here’s the full list of changes and fixes added with this patch.

The much anticipated Dark Enchantress Update is finally live on consoles, bringing an enormous amount of changes, fixes, improvements and most importantly, balance changes. The cherry on top however is Dark Enchantress herself, Morgan Le Fay. Able to wield her mystical powers to conjure summons that help her during battle, it is a highly dangerous character and a very nice addition to the already huge roster of SMITE. Below we have the official patch notes list, that includes every detail of this update.

Benevolence was providing GP5 starting at 0:00 which created some extra options with opening builds if you waited in the fountain with it for some time. Now players will need to leave the fountain with it and the time needs to be above 0:00 before it will start granting this benefit.

The Mask tree as a whole is seeing some love this patch. These items allow for class shifting among different roles but their effects were often too intense and the build paths too difficult. While these items have potential to be unhealthy if everyone is using them we do think there is room for them as fun flex choices in key situations.The Tier 1 of the tree itself was underwhelming. At 500 gold is provided very little. We have doubled the amount of HP and Mana provided while increasing the cost to match this value.

Fighter’s Mask was also a large investment for little gain. When it lost flat penetration the stats provided for the cost no longer matched. A boost to power here makes building into Rangda’s Mask easier.

Rangda’s Mask is first up with what appears to be a shift. A small power increase helps but the main change is related to the boost/penalty applied to this offensive mask. If tradeoff is too intense (say 50%) this item arguably becomes weaker as players too reliably die before they can benefit. Similarly if this is too low (say 5%) the shift itself doesn’t feel like it contributes enough. There is a sweet spot for this value that maximizes the shift strength and minimizes the drawback. We believe this item will perform better at 15% than 20%.

Protector’s Mask gets a nice boost of protections for upgrading to it from Mask, but at 50 it provides less health than the new Mask. This not only eases the build path but makes sure it never feels like a downgrade to upgrade to this mask.

Similar to Rangda’s Mask finding the sweet spot for the stat tradeoff is important. For Assassins and Mages shifting towards a more Guardian playstyle, the extra tankiness of 20% helped but the penalty towards healing and damage really limits how much they can contribute in fights with kits that often have less control. At 15% we feel this will be a stronger option for these types of shifts.

Transcendence has strong potential for Assassins and Hunters alike but has struggled to see play. Its overall cost makes it a heavy investment that also takes time to pay off. We are decreasing the cost to make this more long term focused plan pay off.

The final item changes this patch are focused around Magical ADCs. Through Season 8 we have seen gods that really rely on strong Basic Attack focused play struggle. Freya, Olorun, Chronos, and Sol all feel this to some degree and we think their overall itemization can be improved. Death’s Toll will now provide some extra power, helping augment the abilities and Basic Attacks during early wave clear.

Emerald Ring could be a strong option to pair with Death’s Toll but its lack of immediately useful stats and low stats in the T2 Enchanted Ring didn’t lend itself well to Magical Carries who wanted to build towards that path quickly. An extra 5% on both Emerald Ring and Enchanted Ring should make this build path more appealing.

Ring of Hecate offers the potential for high power and sustain but with its last nerfs it never really found that spot. It was overvalued for its sustain and didn’t provide enough of a punch. These two changes should help in both respects.

This change was done in the 8.5 Patch but went undocumented. In general Vampiric Shroud was underperforming and we wanted to better reward bruiser mages or mages looking for early safety with some extra gold to spend and some extra power on their abilities.

This change does not actually affect balance, as all balance changes are in the Bonus Balance. Reach was often confusing and the tooltip did not fully describe how this ability functioned. While it said it did 35% scaling what it really did was take 35% of “In-hand” damage, a combination of “Bot” power and “Item” power. Combined with how Magical Gods only use 20% of their “Bot” power to get their “In-hand” damage it quickly got confusing and was not intuitive. It is much more intuitive and just as accurate to say that Reach deals 1.5x damage (after the latest balance changes) of your Basic Attack damage. So in short, nothing functionally changed here but it is all much more clearly written out.

Ah Puch is a low mobility mage that relies on slows, zone control, and the sustain from his passive to stay in a fight. This often leads to him fighting right in the thick of the whole team and encourages splashes of tank items. To further help him out in these situations we are giving him bruiser mage stats which should further assist in this playstyle. Combined with a standard ultimate cooldown Ah Puch will be able to better assist in teamfights.

Decreased Cooldown from 100s to 90s

Artemis haters will now have to face a stronger early game Suppress the Insolent. As a god with a strong teamfight potential and high throughput damage, a more consistent and high pressure early may just be the extra push this low mobility hunter needs to see some success.

Last notes Horus’ wings became 8% more aerodynamic and the mad scientists here have pushed that even further. With a 14% improvement Fracture can now travel a further range, allowing him to engage and lock down opponents who were previously just out of reach.

Hou Yi was a high contention hunter that has fallen from that position over the course of Season 8. A boost to Ricochets damage should give him some stronger early game potential and this bonus can be multiplied by a powerful triple hit.

Fade Away has strong telegraphing and counterplay towards the stealth component, which made the 20s cooldown feel too intense. This should increase Izanami’s safety during the early game and give her more flexibility when being aggressive as well.

Kumbhakarna just took a power nap and is ready…for another power nap. However he did get some solid boosts to help him out. Throw Back’s initial damage will provide some extra lethality when used on gods and not on a minion wave while Groggy Strike should feel more rewarding for its long channel time.

For a god as Fast as Mercury he struggled to keep up with other Junglers and their clear. Made You Look is getting some extra base damage to help close that gap.

Dragonfire is seeing a solid update. This ability went on cooldown after the dragons despawned, making its cooldown significantly longer than listed. We are making this ability go on cooldown upon cast and adjusting the cooldown to compensate. This makes the ability easier to track and also lets it better interact with cooldown reduction.

Rama is the final hunter we are bringing up. Rama saw heavy success for a long time but introducing proper conveyance and counterplay to the ult landing really hurt his success. This was especially felt at high levels. We are reverting a change we did to Astral Barrage now that more counterplay opportunities exist and also giving some extra reward for aggressive uses of Rolling Assault.

Increase Scaling on the bonus damage shot from 25% to 30%

The Smith of the gods has been busy cooking up a stronger Meatball. Vulcan is on the cutting edge of technology and balance so this boost to his base damage should round out his early clear when competing with other Mages.

SMITE is available on PC, PlayStation, Xbox and Nintendo Switch. For more about the game, make sure to visit the official website right here.