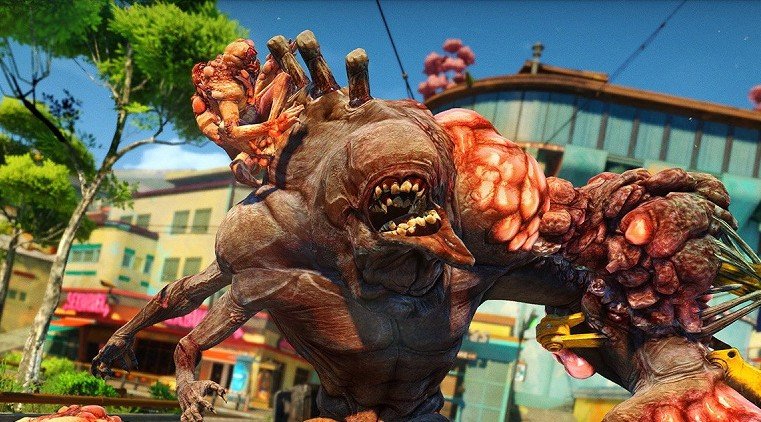 Sunset Overdrive is the big new IP from the guys who gave us many beloved franchises, Insomniac Games. The world of Sunset City can be a harsh one with OD’s running amok, FizzCo. security and scavengers all looking to plaster the pavement with your blood. Luckily we’re here to help. Here’s some Sunset Overdrive tips on how to survive in Sunset City.

Think of Sunset City as a giant toy box and you are an awesome parkour master looking for a place to play. You have to keep on the move so you don’t get shot at or attacked. This also boosts up your style meter which concurrently allows you to use your wide array of Amps at your disposal.

Additional movement tips include pressing A anytime you land, dodge roll, or really any action in the game, including transitioning from hanging from wires to skating on them. Pressing A at these times launches your character in the air to get additional air time.

There are a lot of weapons in the game and it doesn’t hurt to become familiar with them, even at the very beginning with no amps or upgrades added to them. Each weapon is more or less effective against a certain enemy type. So by looking into this it helps a great deal in conquering the vast hordes that will swarm your character. For example, throughout most of the game the OD will be your primary adversaries. They are weak against the Flaming Compensator, which is a fireball spitting shotgun and the High Fidelity a record spewing gun. Scabs are weak against the Dirty Harry pistol. Finally, Fizzco Robots are weak against electric powered guns and

Scabs- Human survivalist enemies which brandish automatic rifles and explosive hurling enemies. These can be taken down with explosive weapons, and pistols in an effective manner. Also vulnerable to melee attacks. Do damage due to high rate of fire weapons, not just numbers.

Fizzco Robots- Smart, agile and have painful laser weapons. Not big on numbers but deal enough damage to warrant being alert. Explosive weapons, and pistols do fair damage but electric weapons are what your going to need. Later in the game they become a pain with mini-camps with robot turrets.

There you have it. A short but helpful array of Sunset Overdrive tips for surviving in Sunset City.