Do you choose the deserters, or Edgewater? 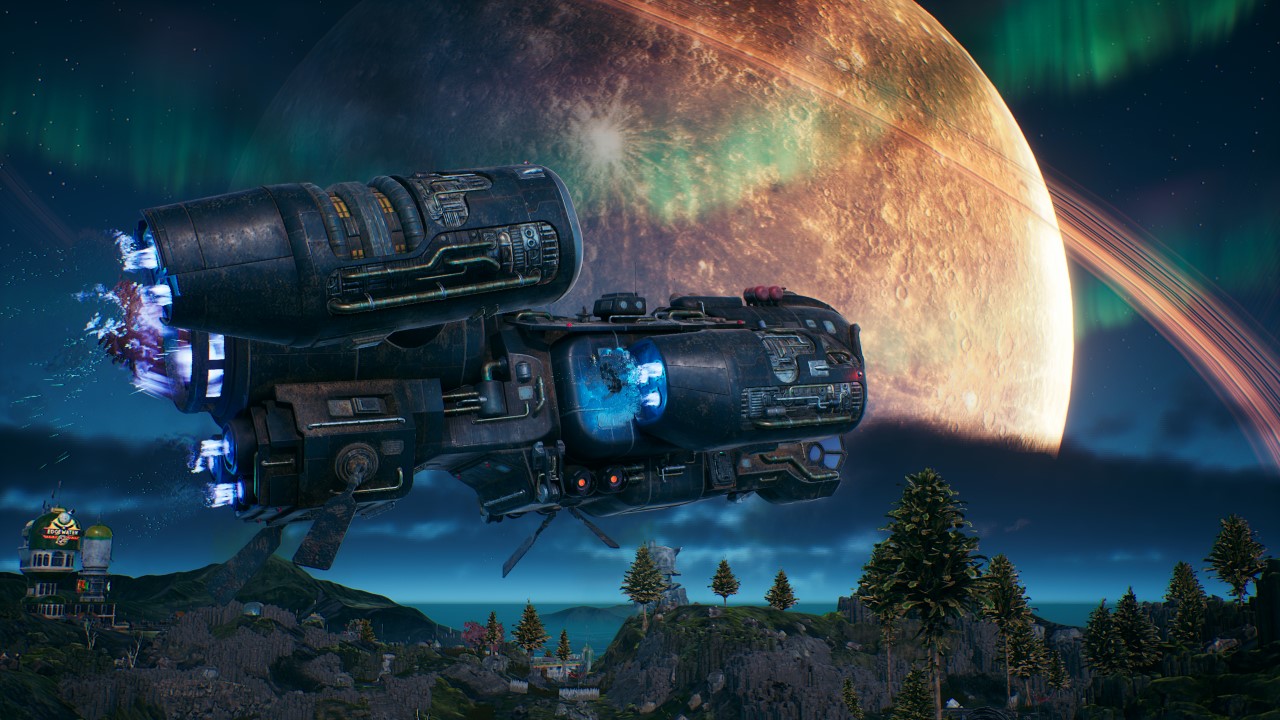 You need a power regulator if you wish to get your newly acquisitioned ship into orbit, and that means it’s time for some hard choices! In The Outer Worlds Comes Now the Power you’ll be tasked by Reed, leader of Edgewater, with diverting power from the nearby geothermal plant to the town itself and to convince the deserters at the Botanical Labs to return. Below is a full walkthrough for the quest, including the different choices you can make. So, to start… 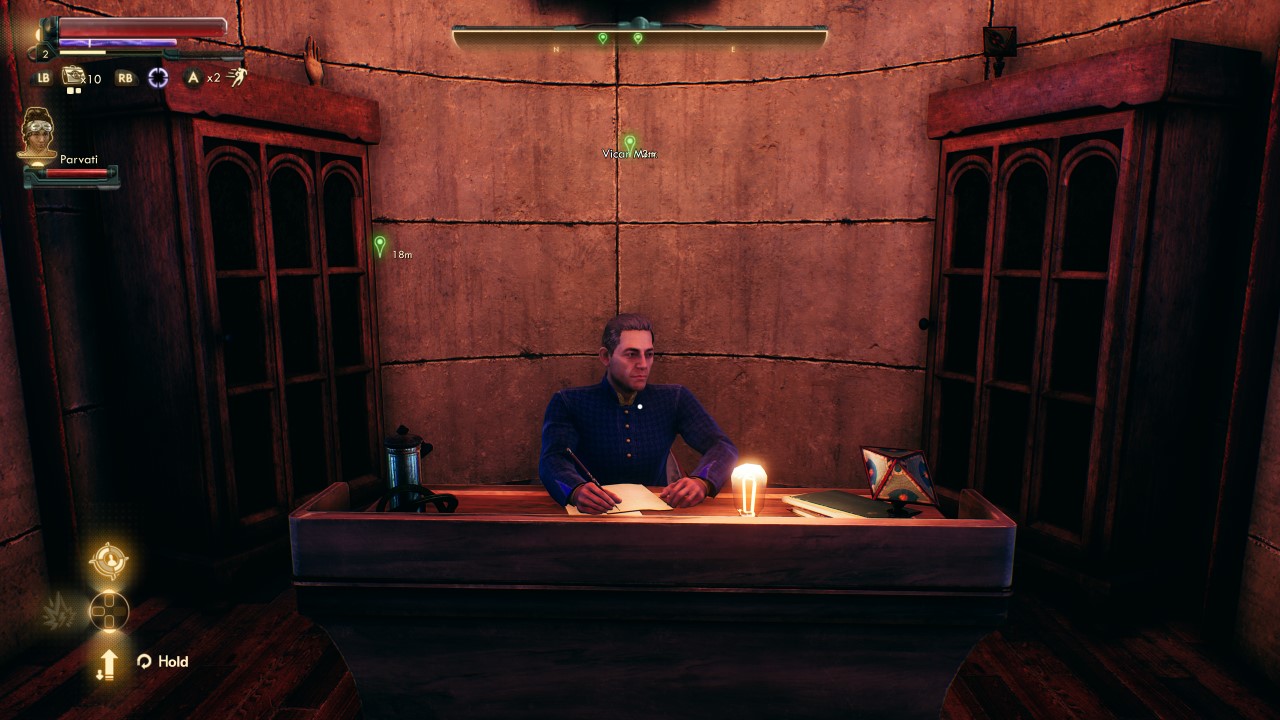 Talk to Vicar Max to recruit another companion.

This optional step doesn’t actually change anything important in the main quest, but it will provide you with some extra xp, some spiritual guidance, and a new companion. Vicar Max will recommend what he feels is the best option for everyone: divert power to Edgewater and convince the deserters to return.

He will also offer a side quest – The Illustrated Manual – to find a heretical text he wants purged from existence. You can complete this en-route to the geothermal plant, so feel free to pick it up if you’d like to recruit Vicar Max. This quest does not impact Comes Home the Power. 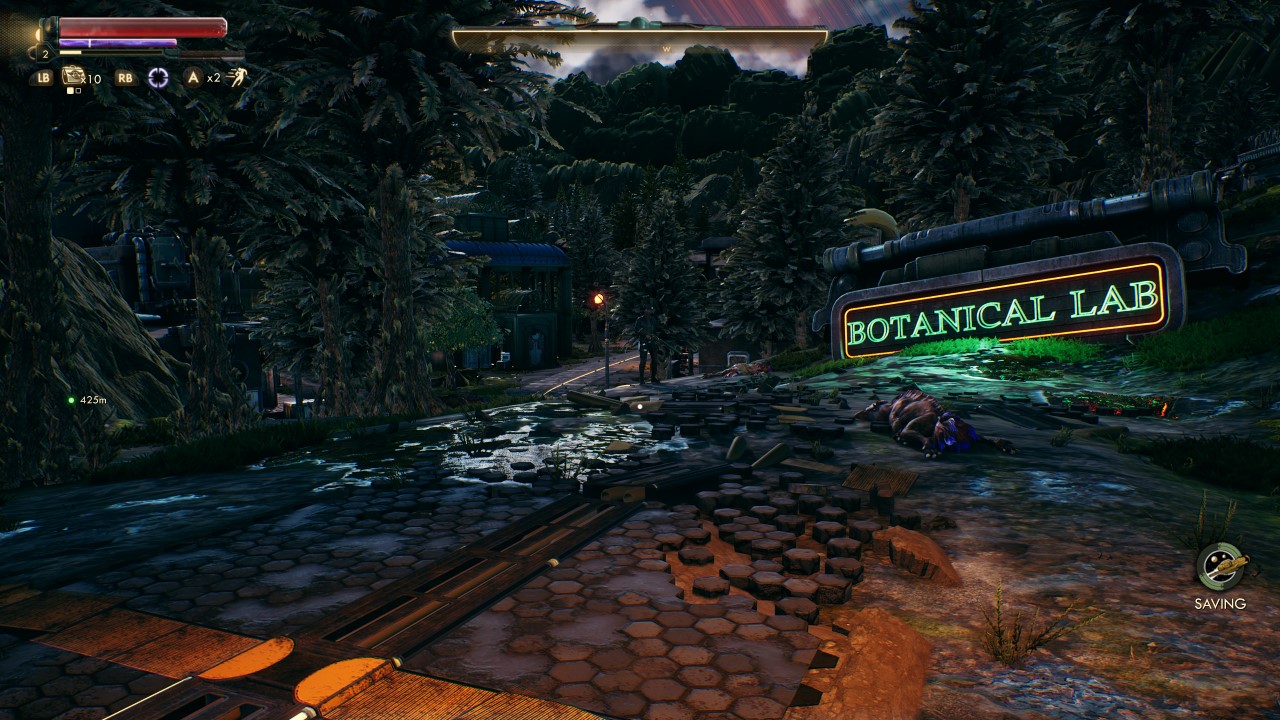 Make your way out of town and head towards the Botanical Lab. There are some marauders along the path, and you’ll pass the geothermal plant on your way up the hill. Once you reach the lab you can either head to Adelaide directly, or talk to the lady at the entrance, Grace. Grace can help you locate Adelaide, and will offer you the side quest A Few Kindred Spirits (which, you will need to complete later if you eventually choose to route power to Edgewater).

Walk over to the hot house, and you’ll find Adelaide inside. Strike up a conversation with her, and after some pleasantries you’ll be given an opportunity to pass on Reed’s message. She’ll press you to divert power to the labs and take the core from the cannery. You’ll get xp from this interaction, and once it’s over you can go ahead and make your way to the geothermal plant. Head to the Geothermal Plant.

Head back down the road and you’ll arrive at geothermal plant. The main gates are blocked by pulsing electrical death currents, but around the back there is both an opening in the wall, and depression that goes under it. Head inside, and dispatch the automechanicals you encounter. There is a terminal you can hack in one of the side buildings that will let you disable the gates, but it’s a bit of a waste. Be sure to loot all the bodies you find: you can find the assault rifle here, and it’s a great early game heavy ammo weapon.

Make your way inside the plant, where a horde of automechanicals are patrolling. There are corpses and crates galore, so go scavenge happy. As you clear out the plant you’ll come across three panels that’ll divert power within the building. They have giant clear pipes leading to them, so follow the pipes to find them. Activate these and you’ll be able to divert power from the plant to either Edgewater or the Botanical Labs.

You can also find a lone survivor at the bottom the reactor shaft, Higgins, and if you talk to him you can convince him to give you his terminal password: you can go back upstairs and turn the remaining automechanicals against each at a nearby terminal.

Once you have activated the three panels and are have looted everything not nailed down, make your way to the quest marker, where you can finally choose which settlement will receive the plant’s power. If you haven’t talked to the Vicar yet and want some extra xp then you need to do so before you proceed. 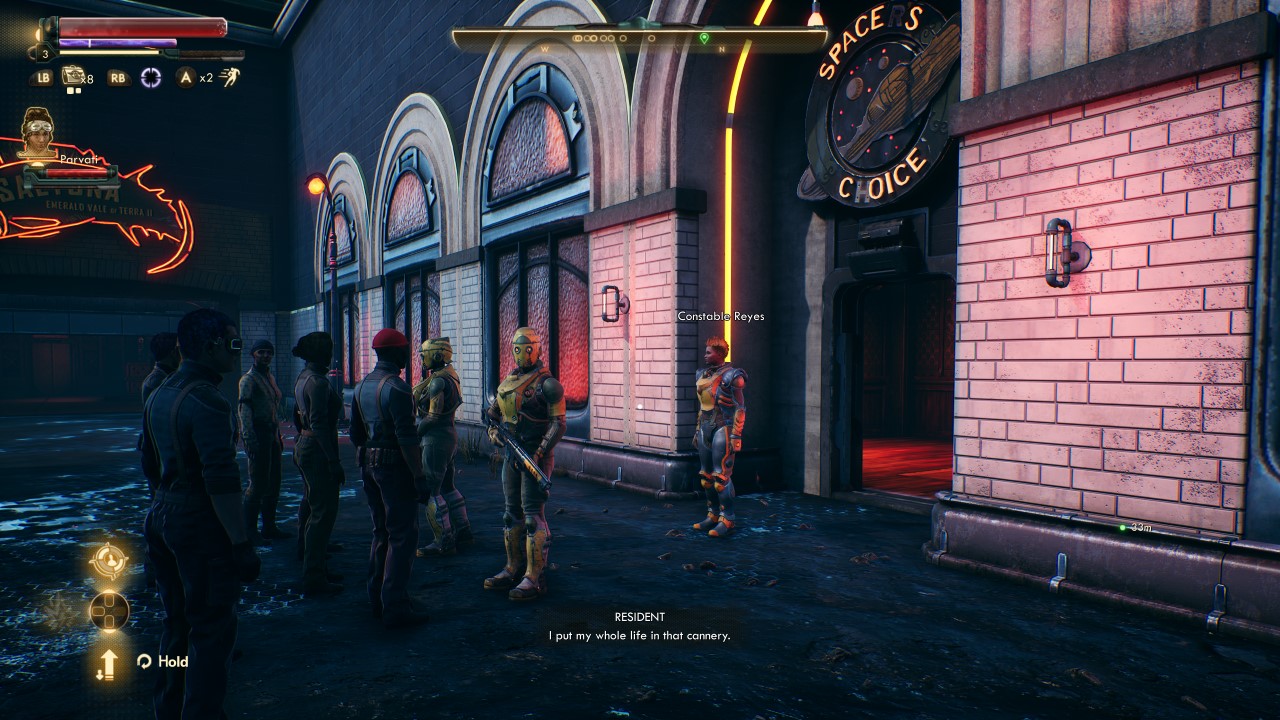 Congrats, ya hippy: you chose deserters over the company, and your Spacer’s Choice rep will go down. Your Stranger in a Strange Land quest will update alongside Comes Now the Power, and you will be told to retrieve the power regulator for the former, and to talk to Reed for the latter.

You could go back to the Botanical Labs and talk to Adelaide, but there is no reward for doing so. You’ll get some thanks, a pat on the ass, and be sent on your way. There are a few side quests here, but they are not mandatory to complete Comes Now the Power when you go down this path.

Go ahead and head back to Edgewater. You’ll find the city is, well, not doing so great. The sick have no way to be treated, everyone is out of work: it’s not a happy ending for the residents. Make your way towards the Cannery, past the disgruntled crowd outside, and head towards the open bay door with the saltuna sign above it: Reed is downstairs this time, by the disabled power regulator.

Reed is mildly pissed at you, and has given his guards permission to fire on you. If you have 25 Intimidate you can call off the guards, otherwise you will have to fight a few and Reed himself in order to retrieve the core. Oh, and the town will also try and kill you…

After the conversation with Reed Comes Now the Power will come to an end. Your Spacer’s Choice rep will plummet, you’ll have doomed an entire town to starvation and death; well done, you monster. If you haven’t talked to Adelaide yet, Parvati will pause you for a moment and give you another chance to do so. Routing the power is permanent, so once you make this choice you won’t be able to hear Adelaide’s offer. That all said, you will no longer get xp for relaying Reed’s offer, so this is purely if you wanna know what she has to say before you go flipping switches.

Once you route the power to Edgewater you will be tasked with retrieving the core from the labs for Stranger in a Strange Land, and Comes Now the Power will require you try and convince the deserters to return. Your Spacer’s Choice rep will increase, but Deserters rep will decrease.

Once you reach the lab, Adelaide will confront you over your wanton disregard for her people. Upset, she will tell you to inform Grace and Thomas outside that they need to move back to Edgewater. You can try and convince her to come back, and even offer to remove Reed from Edgewater.

This will give you an optional objective: you could simply kill the man, but Adelaide will provide a more “peaceful” option if you ask. Either way, you can take the core now: Stranger in a Strange Land will update and task you with returning to your ship, but if you wish to finish Come Now the Power you will need to wait a moment.

Go outside and talk to Grace and Thomas. You’ll get a side quest from each that will make them more willing to leave; A Few Kindred Spirits for Grace, and The Frightened Engineer for Thomas. 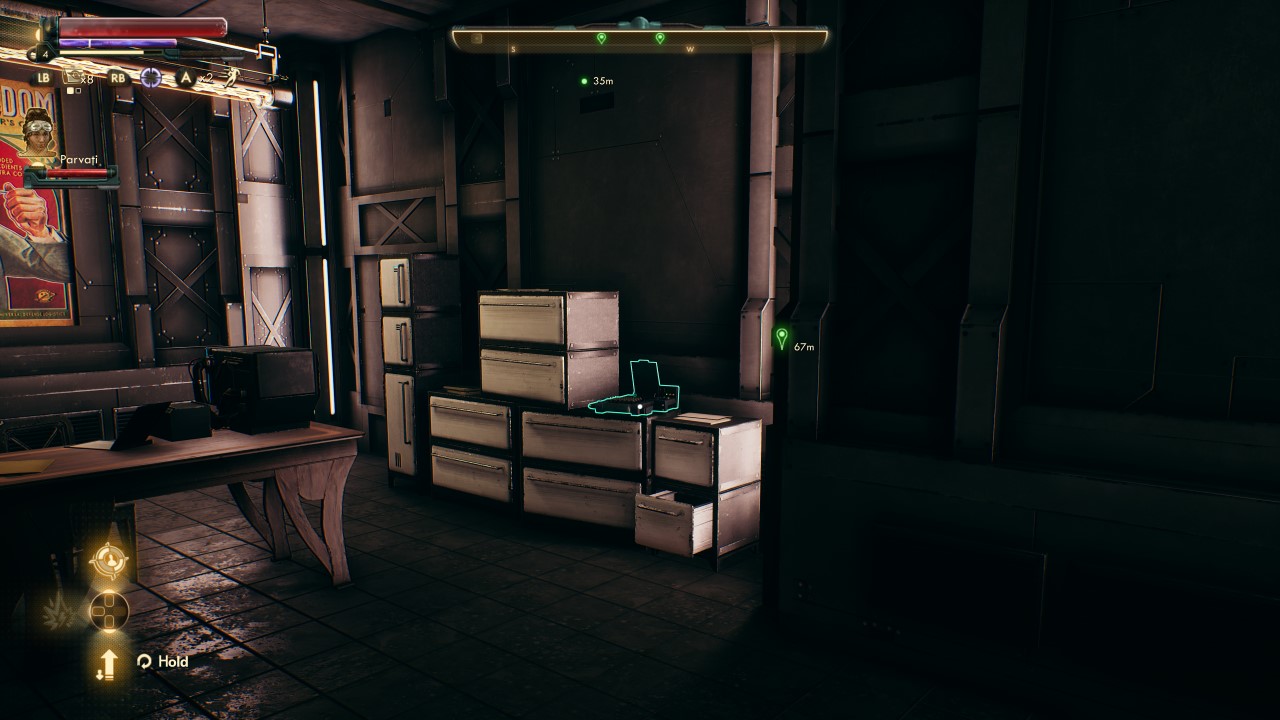 If you scrounged around the geothermal plant you likely found one of the engineering manuals Thomas wants, though the other two are easy enough to grab. One can be found in the community center between the labs and plant, though you’ll have to deal with some marauders, and the other is inside the cannery on the second floor within Parvati’s father’s office.  For the sake of Comes Now the Power you will only need to give Thomas one of the manuals to open up the dialogue option asking him to return.

Grace’s quest is a little tricker: a deserter named Zoe has gone missing and she is worried. You can press her for where Zoe may be, but all you’ll find out is that there may be information in Zoe’s room. Also talk to Garcia, and get him to reveal he had a gift for Zoe. Afterwards head to Zoe’s room; with the power out there is no one to stop you from poking your nose about. Once inside, look to the right of the door and you’ll find Zoe’s Journal – Page 22. 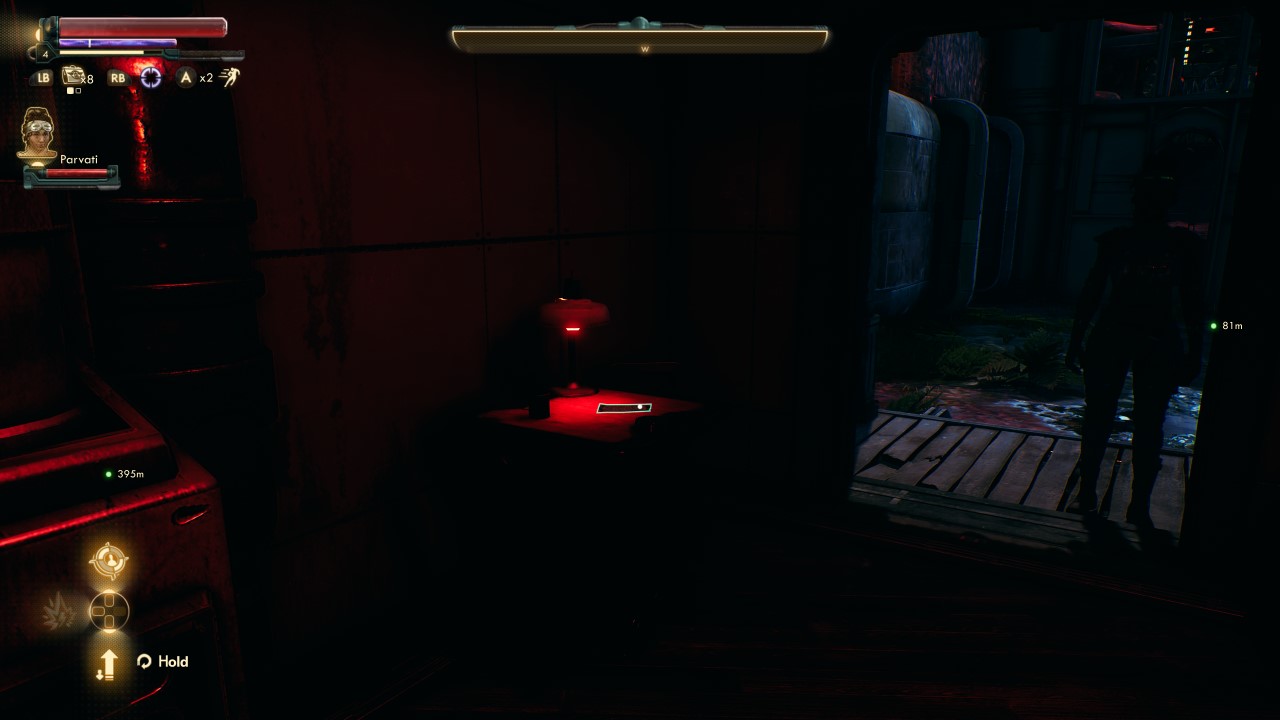 Turns out Zoe dreamed of becoming a marauder queen, and left to throw her lot in with them. A quest marker will appear, and it’ll lead you to Zoe…and some marauders. Once you’re able to talk to her, you’ll find she isn’t exactly keen on returning.

If you’ve got at least 10 in Persuade you can convince her to return, or 46 in Intimidate if you like being a bit of a dick. The Persuade option doesn’t completely do the trick, but if you talked to Garcia as recommended then you can tell Zoe he has a gift for her, and she’ll return to camp. Head back as well, and you’ll be able to convince Grace to return to Edgewater, as well as earn a bunch of xp and a Bolter Pistol for your troubles.

Now that the two of them are more inclined to leave you can either tell them to return to Edgewater outright, or to wait on you to “talk to Reed” if you plan on dealing with him for Adelaide. If you tell Thomas or Grace to return to Edgewater you will lose the ability to dispose of Reed, but you can finish the quest by talking to him back in his office. You’ll gain 11,400 xp, a discount on Spacer’s Choice products, and reputation for Spacer’s Choice. 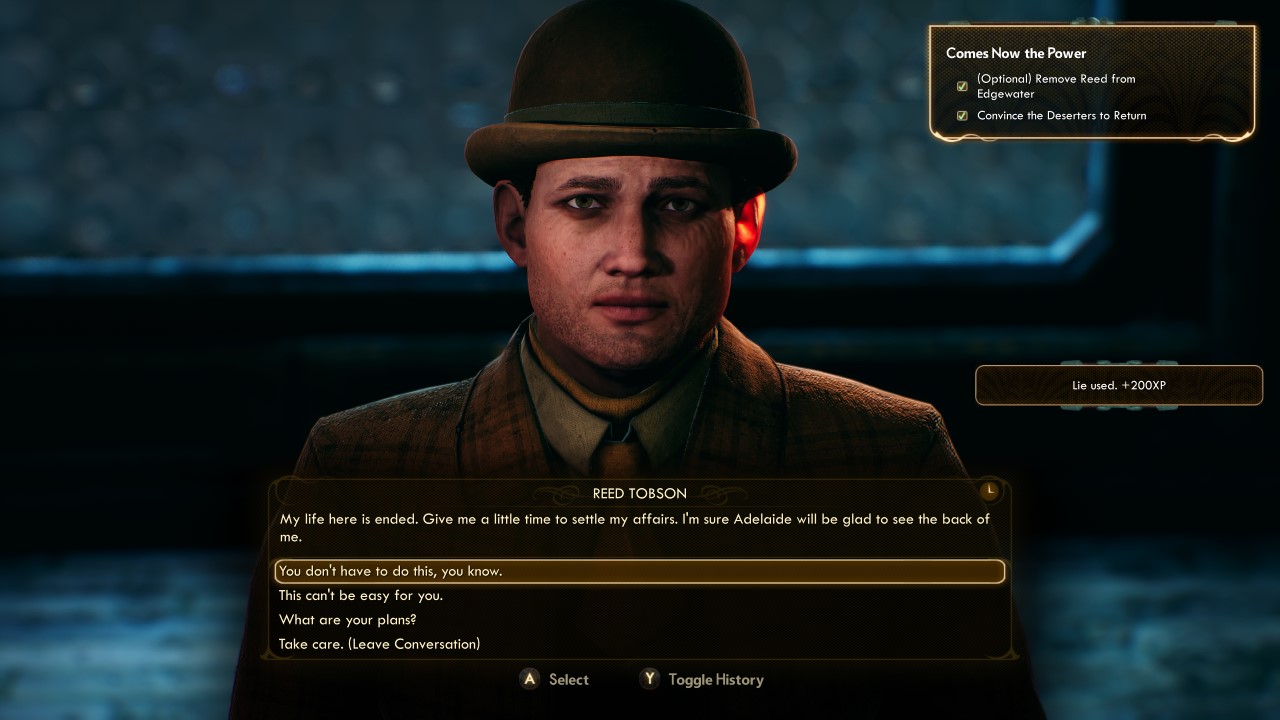 If you opt to remove Reed from power, return to him without telling either of the pair to leave. While talking with Reed he will eventually grow annoyed at you. You have a few options available to you, but they mostly lead to the same outcome. You will need to convince the stubborn lout he needs Adelaide’s garden, and you’ll need 10 Persuade to get this through his thick skull. For 25 Lie you can avoid telling him what Adelaide’s secret soil ingredient is, but he will agree to step down regardless of whether you lie or not.

Or, ya know, you can attack him. He does have two guards, so be prepared for a fight. You will damage your relationship with Parvati if go down this road, and you’ll need to pass a 10 Persuade, Inspiration, or Lie check if you want her to stick around. You can loot his room key from his corpse, and within his room you’ll find a terminal, a crate with items, and a bowler hat like the one he wore.

Once Reed is either peacefully or violently disposed of return to Adelaide and give her the news: she now runs Edgewater. You’ll complete the quest and be given 11,400 xp and Adelaide’s Watch as a reward (or, ransom in her words, seeing as you did shutdown the power at the labs). You’ll gain Deserter rep, but rep with The Board will drop. 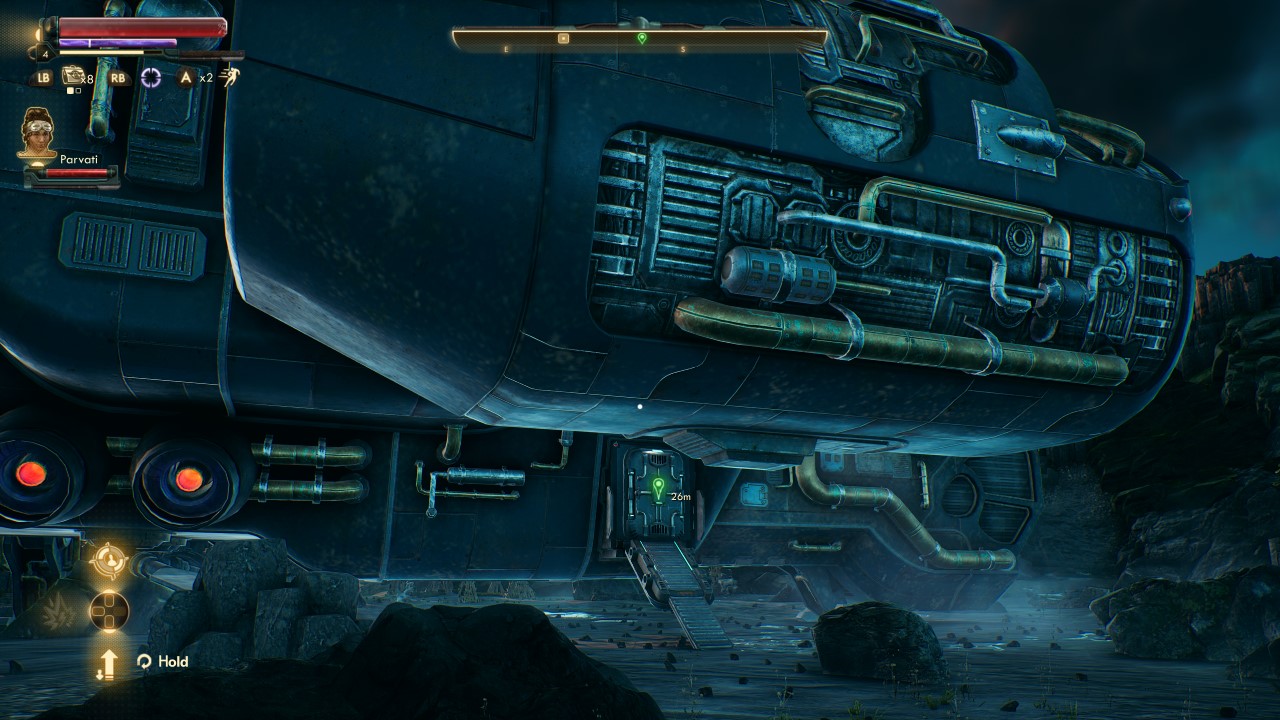 Head back to your ship to complete Stranger in a Strange Land.

Now that Comes Now the Power has been completed, all you need to do now is plug your new power regulator into your ship, and you’ll finally strike the starting quest off your log. Go ahead and do so, and be ready to take flight.