Everyone has a price; including you. 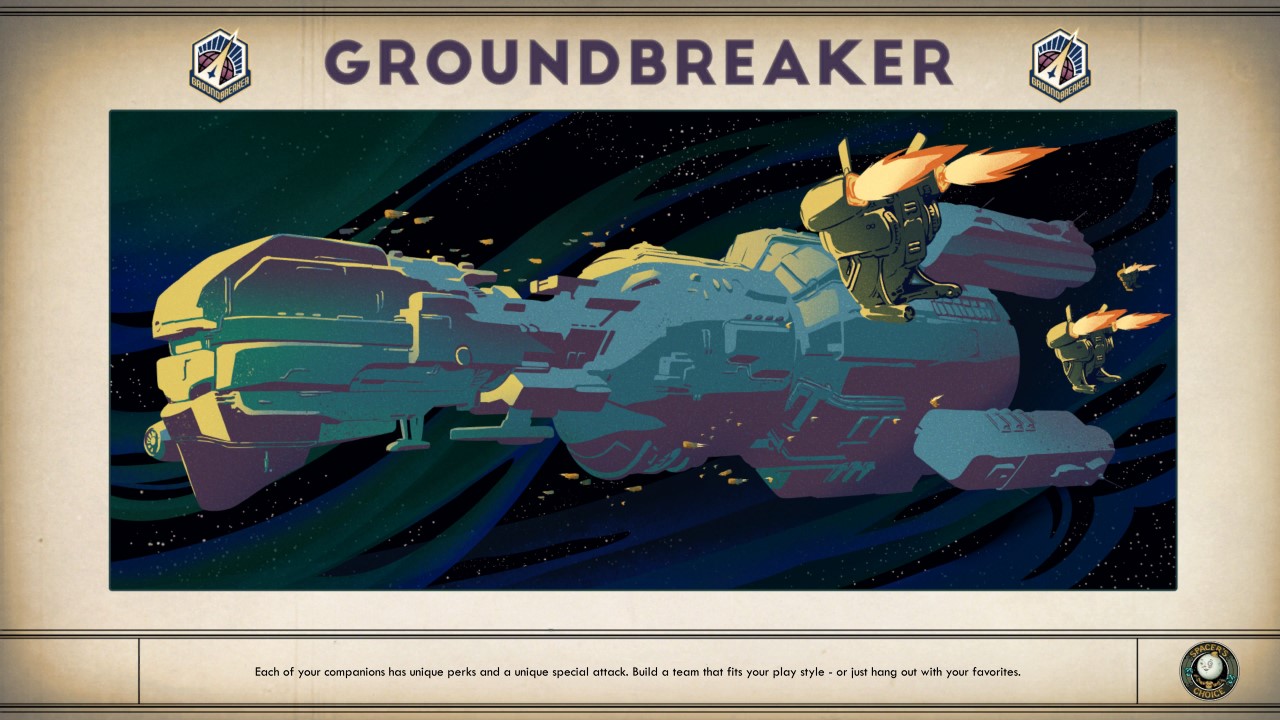 You’ve repaired your broken down excuse of a ship and are now free to wander the system…mostly. Once ADA takes you into low orbit, Dr. Phineas will ring you up to discuss your next moves. He pleads with you to save the rest of the Hope, and you have to head to Stellar Bay on Monarch to get that particular ball rolling. You’ve officially started the next main quest in The Outer Worlds: Passage to Anywhere; boy, I hope you enjoy running errands.

First, however, you need to head to the Groundbreaker and rendevouz with a Ms. Gladys Culkelly in order to grab a Nav Key for Stellar Bay. This quest will be broken down into two parts: the Groundbreaker in Part 1, and Roseway in Part 2. If you find yourself assisting the Board, The Demolished Woman has it’s own, separate guide. All of these can be found on our guides page. 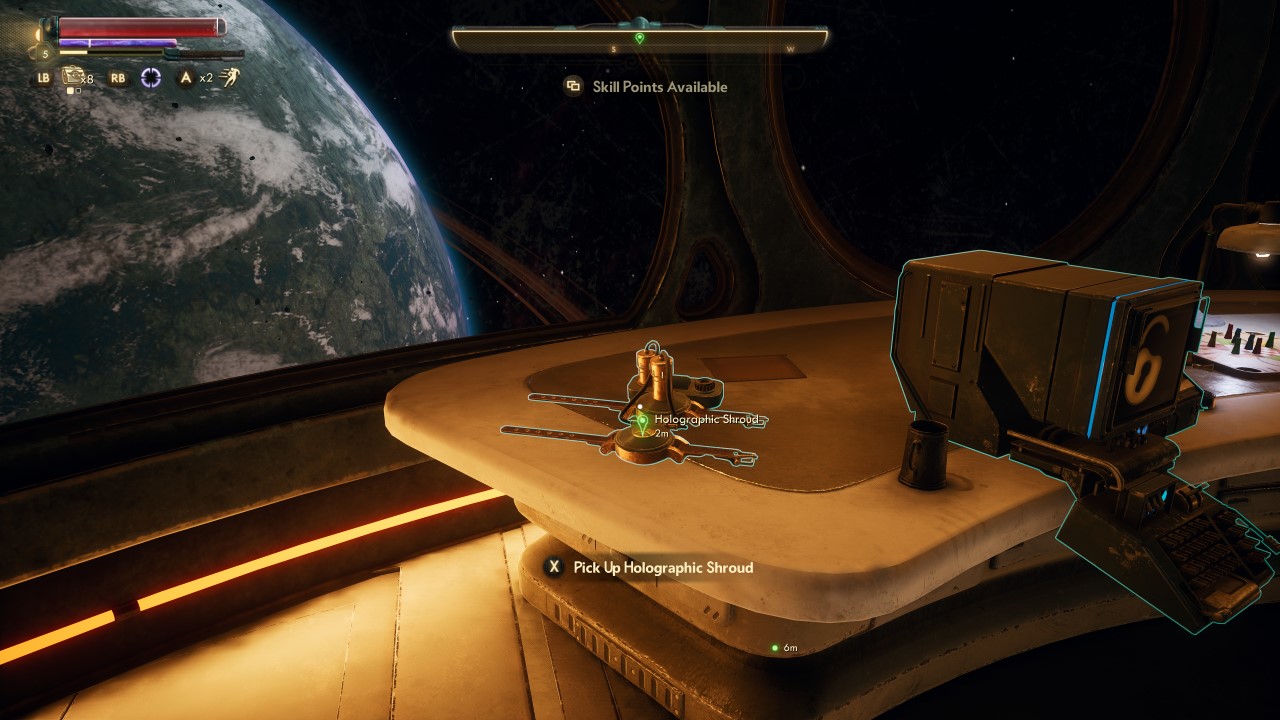 Before beginning Passage to Anywhere grab the Holographic Shroud first.

Once you’re done talking with Dr. Phineas you’ll be given the option to fly to Groundbreaker straightaway, but there is an optional holographic shroud in the captain’s quarters that’ll make your life easier throughout the game. It’ll change your appearance to mimic the appearance of another, and can make stealth easier to perform in plain sight. It does deplete energy as you use it however, so you need to be smart about when and where you use it. As long as you find an ID card for it, you can use it, and restricted areas will tell you what ID you need.

Just leave the cockpit and turn right. Go up the stairs and you’ll find yourself in your fancy, dingy captain’s quarters. The suit is on the desk. You can also check Hawthorne’s terminal, and pick up the side quest Weapons From the Void to hunt down special Science weapons.

Go ahead and return to the navigational terminal in the cockpit, and set course for the Groundbreaker. You can go straight to Monarch, but it’s rough going and you’ll miss out on some rewards found via following the quest. By all means: if you are feeling brave then head straight for Monarch and skip ahead to our Radio Free Monarch guide. You can also head to Dr. Phineas’ lab and knab yourself a shrink-ray. Yeah…it works exactly like you think. 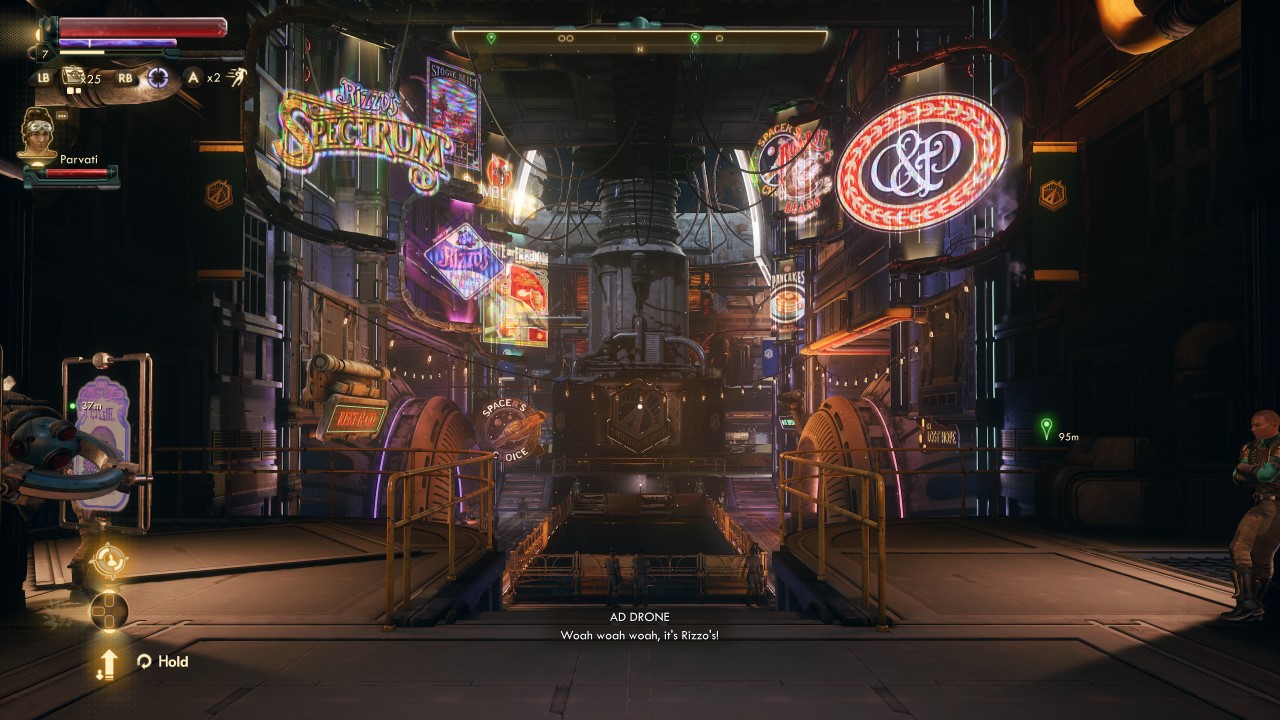 Land on the Groundbreaker.

Before leaving your ship, Parvati will ask to visit an engineer she heard about who works on the Groundbreaker, which starts the companion side quest Drinking Sapphire Wine, which doesn’t affect Passage to Anywhere. However, helping the person Parvati wants to meet – Junlei – WILL affect the final mission and ending. You don’t have to do so now, but you’ve been warned.

Whether you push the main quest, or choose to do Drinking Sapphire Wine/assist Junlei first you will need to stop by customs to progress Passage to Anywhere. You can present Hawthorne’s ID, or you can admit you’re new. No matter what you pick The Board will impound your ship, and you are now officially stranded on the Groundbreaker!

You’ll need to talk to Udom Bedford to release your ship. You’ll also get the side quest Solution Vital if you respond to the customs agent, Cpl. Leonard Wheeler’s, request. It’s a simple side-quest, and can be done at your leisure. 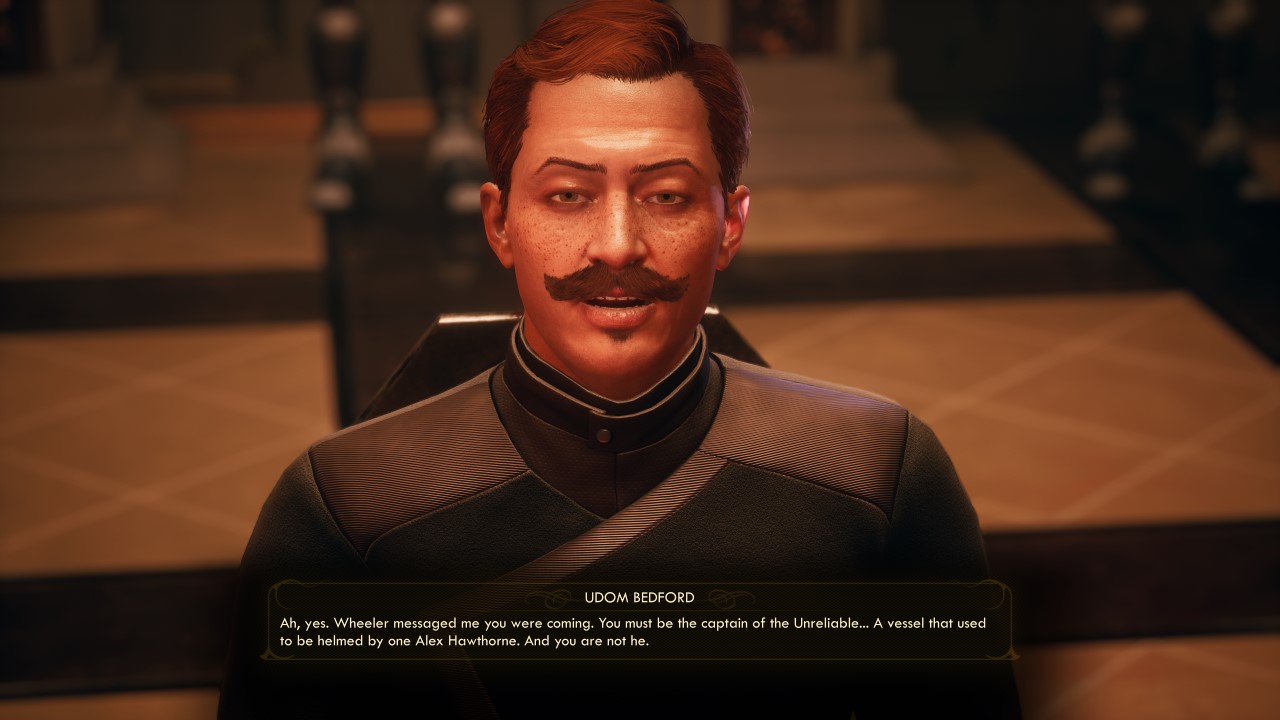 Once past customs make your way towards the waypoint; you’ll walk into a wide bazaar, and the office you are looking for is in the far back right. Head past the guards inside to talk to Udom Bedford, and negotiate getting your ship out of impound. You can also turn in Dr. Phineas Welles here for a sizeable sum, but this will alter the course of the game and the ending if you follow the ensuing quest chain.

As fate would have it, Udom Bedford had a bit of a crush on the late Alex Hawthorne, and he is a bit disheartened to hear the good captain is no longer with us. You can console the man, or you can get right to the point concerning your impounded ship. You can lie to earn some extra xp if you choose to show the grieving man some sympathy, so it may be worth your while.

Udom will eventually release your ship, but he won’t let you leave just yet. If you didn’t already rat out Dr. Phineas Welles, Udom will pressure you for any information you may have. AGAIN: this choice will have a permanent effect on the game, and it does change what ending you will get. 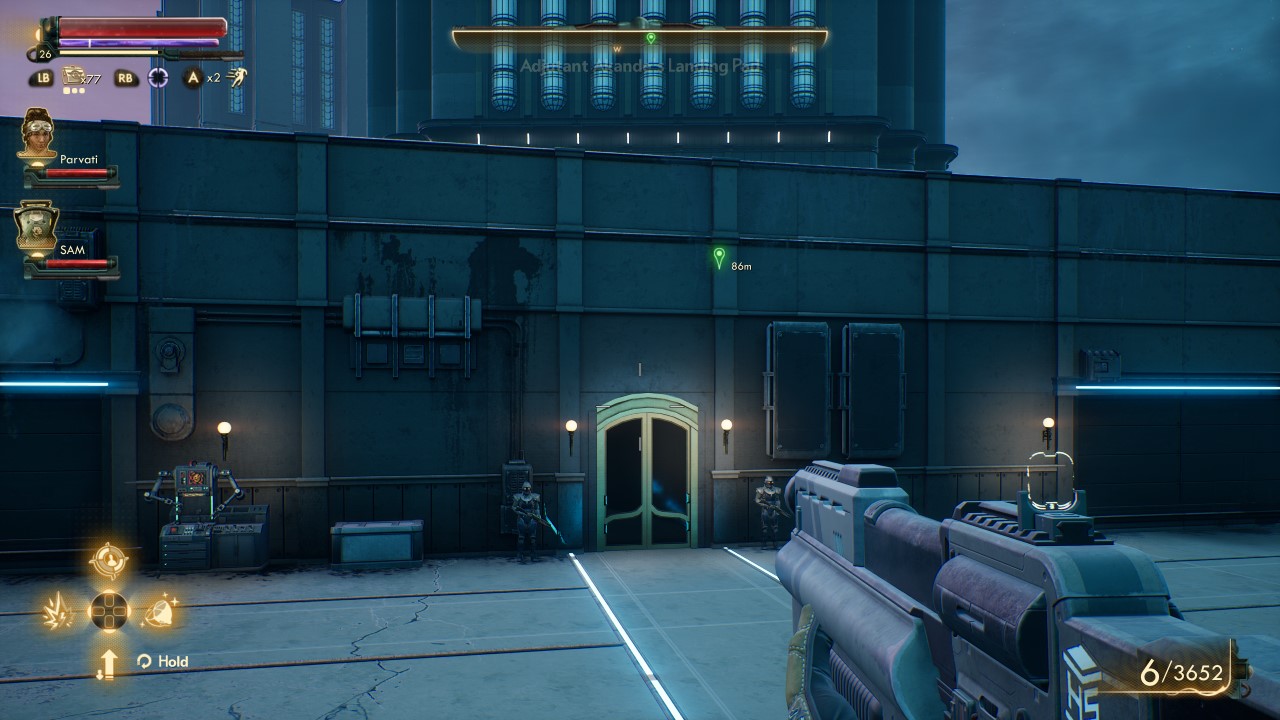 Rat out Phineas,  and you’ll discover Udom has lost his corporate badge The quest Balance Due will begin: Gladys has the badge and it’ll cost you 8000 bits to acquire it from her. Either pay Gladys upfront, or press forward with Passage to Anywhere to get the bits you need. Instead of using them to get the Nav Key, buy Udom’s badge.

You’ll complete Balance Due, and get the quest The Puppet Masters, where you’ll visit the Board’s second-in-command, Ajutatant Sophia Akande, on Byzantium. You’ll be given permission to dock in Byzantium at her personal pad, and when you do it’s a simple linear jaunt through a hall, up an elevator, and ahead towards a reception desk to resolve The Puppet Masters.

Akande will give you a new mission: The Demolished Woman. Completing this will lead to the same overall outcome as Passage to Anywhere: you’ll be given permission to land at Stellar Bay on Monarch. You will complete Phineas’ quest, and gain a Board story quest that will run parallel to his next task: Radio Free Monarch. Guides for both can be found here. 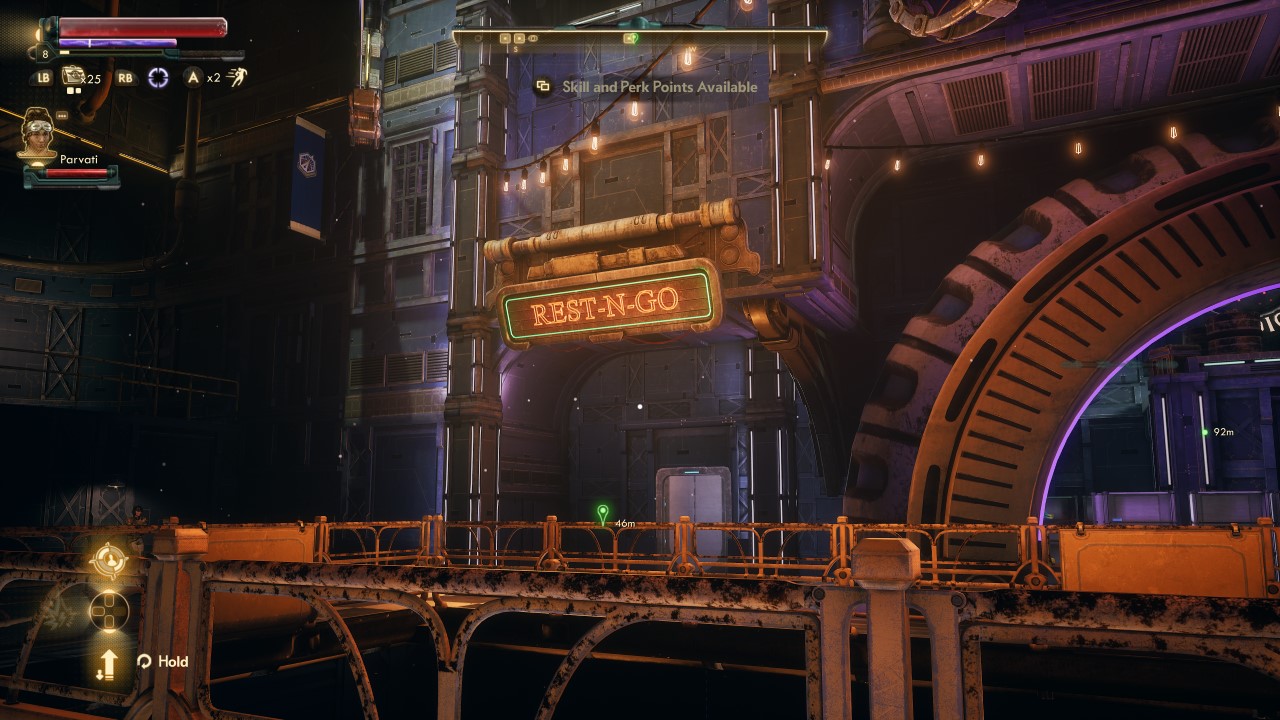 Refuse the offer, and Passage to Anywhere continues.

If you keep Dr. Phineas’ location a secret you can always return to Udom later to throw the old man under the bus, and kick off the events listed above. Otherwise, Passage to Anywhere will proceed as normal with no new side quests…yet.

After the conversation concludes you’ll have access to your ship once again, and you should now make your way to Gladys. When you leave Udom’s office you’ll see she is across the bazaar in the Rest-N-Go. Just head on over, enter, go into the room on the left, and find Gladys sitting at her desk.

Strike up a conversation with Gladys: there will only be the one dialogue option to start, outside of a trade option, She’ll eventually offer you the Nav Key…for 10,000 bits. If you don’t have the money (or simply don’t want to part with a small fortune) Gladys will offer you an “opportunity” to earn the key. 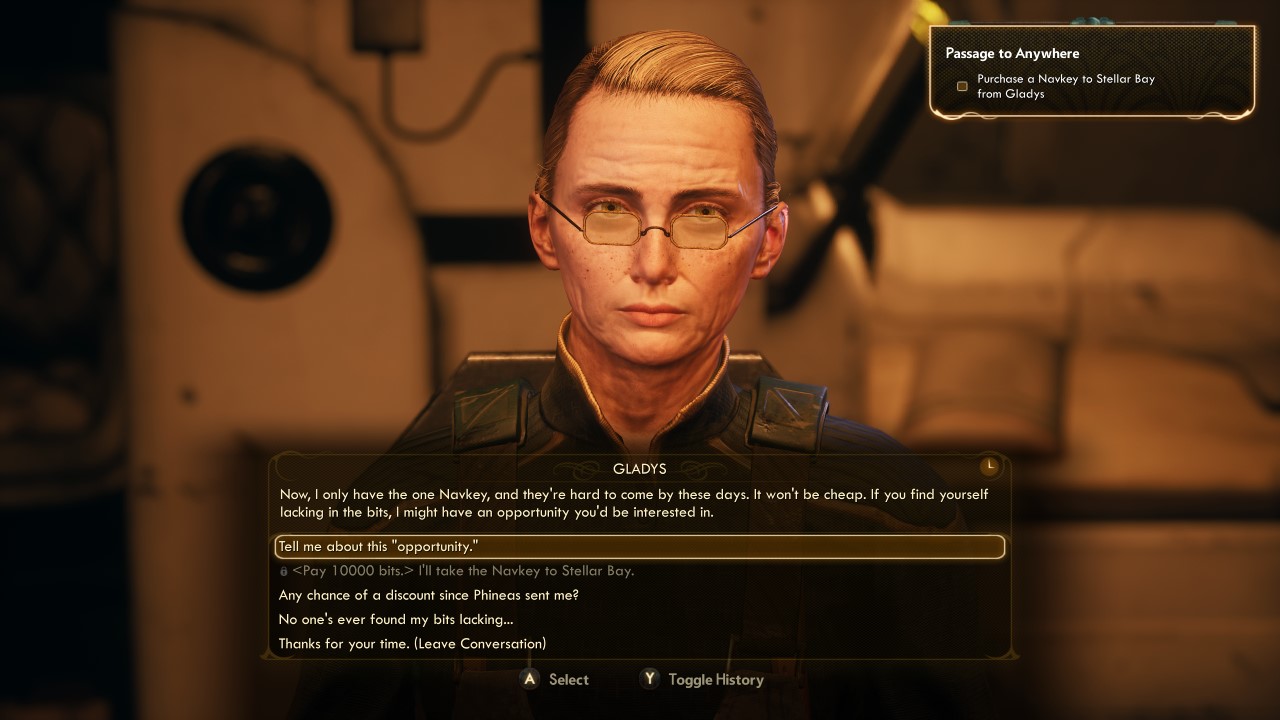 Gladys will give you a mission that requires you check out a questionable distress call retrieved from an old outpost called Roseway. Accept the mission and you’ll get the side quest The Distress Signal. Unless you’ve already pinched 10,000 bits, this side quest will cover the cost needed to buy the key and advance Passage to Anywhere. So, head back to your ship and set course for Roseway.

You can also recruit Felix to your crew before leaving: he is standing right outside the Unreliable’s ramp. If you ignore him, he can always be found again leaning on the cargo container just outside your ship as you head into the Groundbreaker.

Part 2 will cover the rest of the side quests on Roseway, and the conclusion to Passage to Anywhere. For it and other guides check out our guides page!