The Outer Worlds – How to Make Money

Amass a small fortune with these tips. You’ve gone and spent the last of your bits, but you need ammo and consumables like there’s no tomorrow. What’s a broke hero to do? In The Outer Worlds, it behoove you to learn how to make money as efficiently as possible.

Create a character with high Strength, Dialog, and Stealth attributes.

Strength increases your maximum carry weight, meaning you can haul more items to sell later. Higher Dialog means vendors will sell to you for a lower price, and buy your goods for more. Stealth is detailed more in the next section, but needless to say better stealth equals more chances to loot items. You’ll need to sacrifice other attributes if you wish to max these, but hey, the dumb dialog is kinda worth it if you want to set Intelligence to Below Average; just saying. Loot everything by investing in Stealth skills.

Picking through crates is a good way to scrounge up extra bits, but there are extra goodies hidden within locked containers and behind sealed doors. Invest skill points into Stealth to not only access harder to hack/lockpick objects, but to eventually unlock Pickpocketing at 40 Sneak. You’ll then be able to pull money directly out of people’s wallets. At 40 Lockpick you’ll get 25% more bits from lootable containers, and at 100 Lockpick you increase your chance to find valuable Prismatic items by 100%. So, if you need extra money, invest in Stealth skills. Pack Mule, Hoarder, Pack of Pack Mules, and Super Pack Mule Perks increase how much you can carry.

Looting everything not nailed down is only worth it if you can carry it all back to sell. That’s where the Pack Mule family of perks and Hoarder comes into play. Pack Mule increases carry weight by 50kg, Pack of Pack Mules by 30kg, and Super Pack Mule by 100kg. Throw in Hoarder to make consumables weigh 50% less, and you can carry a small store on your back.

Grab The Negotiator and Snake Oil Salesman perks to make vendors work for you.

The Negotiator reduces vendor prices by 20%, and Snake Oil Salesman increases the sell value of your items by 20%. The Negotiator is great not only at helping you save bits when buying what you need, but makes it easier to purchase a stockpile of mag-picks for hacking, and bypass shunts for lockpicking. If you are investing in Stealth skills these will be the most valuable items you carry, so being able to buy them en-mass for cheap is vital.

Snake Oil Salesman makes everything you sell 20% more valuable, meaning you can pawn off unneeded armor, weapons, mods, and consumables for more profit. This also applies to Prismatic items, which are a fantastic way to make extra coin. You need to have spent five perk points to unlock the tier Snake Oil Salesman is in, but it’s worth it because… Prismatic items sell for more than their standard counterparts. 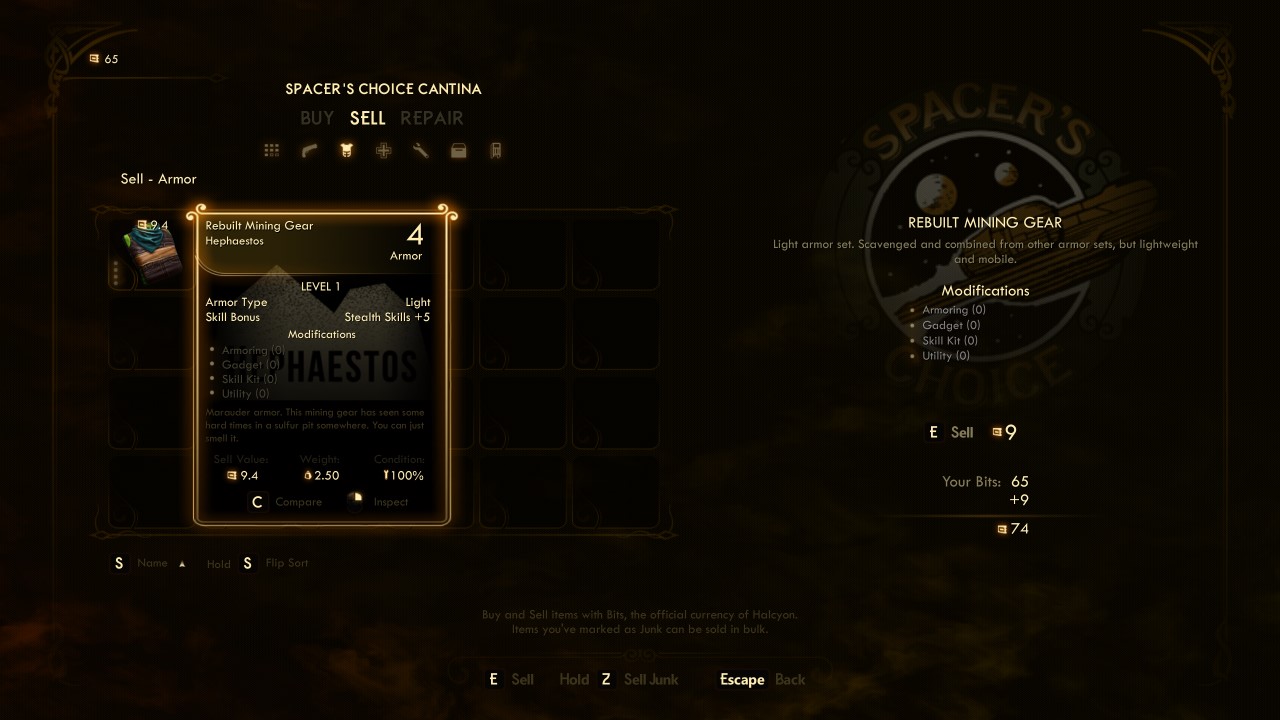 Once you have roughly a hundred armor and weapon parts on hand you shouldn’t have to worry about repairs for a while, assuming you are using your workbench for said repairs. Armor and weapon parts are easy enough to find in the field, so if you are looting everything like a full-blown kleptomaniac then you’ll not have to stress over repairs once you’ve built a small stockpile of them. After you have a hundred or so weapon and armor parts, start selling everything you don’t need. Vending machines are all over the Halcyon colony, so as your looting you should stumble upon plenty to offload your goods at.

That’s how to make money in The Outer Worlds; at least the long as short of it. With the right skills, perks, and sticky fingers you’ll find yourself drowning in more bits than you can spend. For more The Outer Worlds guides and walkthroughs check out our guides page.

Home / Game Guides / The Outer Worlds – How to Make Money