Tony Hawk’s Pro Skater 1 + 2 – Where Do You Wallride 5 Bells In The School Level?

At least one will be a bit tricky to find. Tony Hawk’s Pro Skater originally had five what were known as Challenge Tapes per level for you to collect by completing certain tasks like scoring a certain amount of points of finding a certain number of a collectible. The just released Tony Hawk’s Pro Skater 1 + 2 renamed this system as Park Goals and doubled the number of them found in each stage as well. Some of these are pretty easy to find and complete with a little bit of exploration of the stages, but there are also some tricky ones that might leave you stumped. The Wallride 5 Bells task within the School level in the first Tony Hawk’s Pro Skater Tour is definitely one of these, so we have collected each of them in a guide for you.

Where Do You Wallride 5 Bells in the School Level?

Each of the levels has 10 Park Goals to complete, with one of the School goals being to “Wallride 5 Bells.” This is easier said than done, as you will likely be able to find four out of the five without too much trouble. However, the other one can take some out of the box thinking to find. We will go over where each of them are here by the order you should get them, with the fourth one actually being the tricky one. The first bell that you must wallride comes not too far from the beginning of the stage. After starting on the awning to start, ride to the end and head straight and to the right in the gap between the two buildings ahead. The building to the right is the gym that you can go inside, but it doesn’t have any bells inside of it. Instead, the outer perimeter has one on it, which you should come across on your right pretty quickly if you follow the path mentioned above. After getting the first bell, you can either turn around and go out the way you came or follow the entire perimeter of the gym back around. Either way, go back to where you jumped off the awning at the start and find the staircase heading down with a grind rail that you can use. After you go down the stairs, go towards the building in front of you and start following it around and you will quickly see the bell in the image above that you need to wallride. 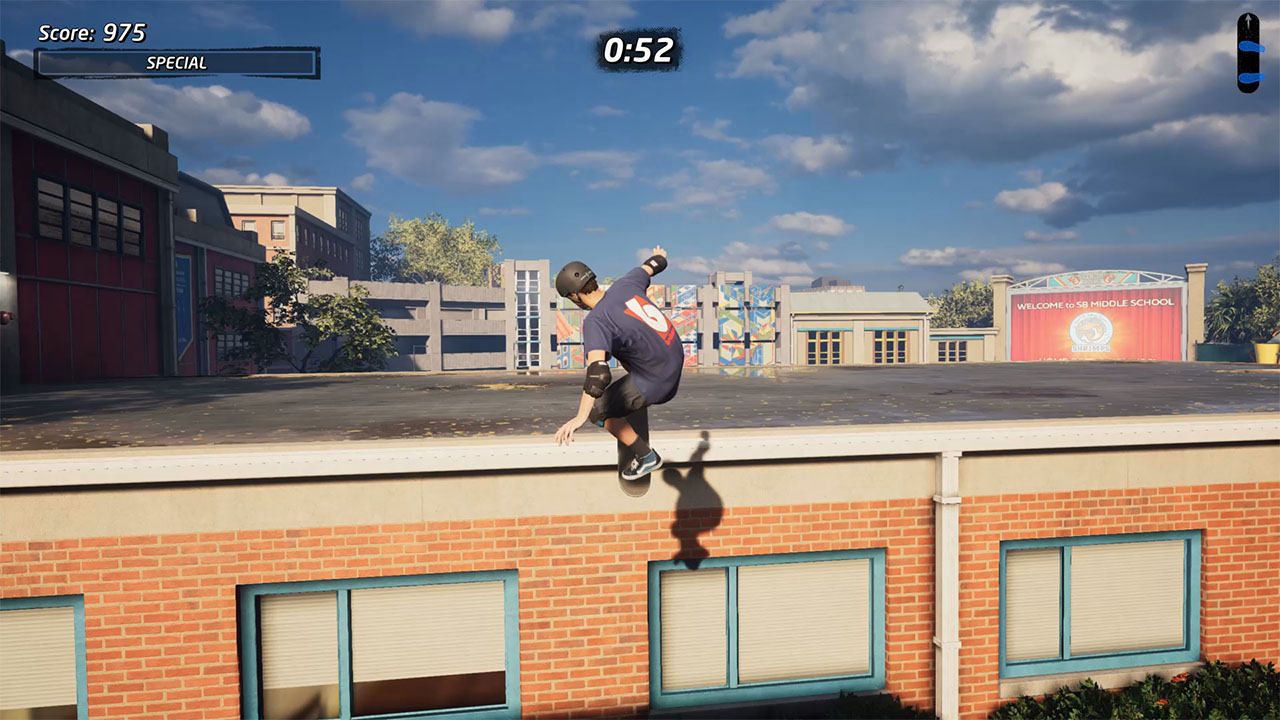 And now we have gotten to the tricky one mentioned earlier. This one will require you to get up on a rooftop, which you can only do by using a little halfpipe ramp that’s along this area. From the last bell, you’ll notice some wall area that serve as halfpipes you can use for tricks that has silhouettes of children painted on them. Eventually these will be both to your left and right coming from this direction, with you wanting to focus on the left side. You should see a roof that it looks like you can reach, so get enough speed and launch off part of the ramp to get on top of the building seen above. Be careful not to accidentally go off the other side and make sure to hit the bell while you are up there. Last but not least we have another one you might miss if you aren’t paying attention, though it’s nowhere near as hidden as the other. After the previous one, go off the other side of the rooftop to the area with some empty pools you can skate in. From here, go towards the path that winds back around to the beginning of the stage and you’ll see the ramp in the image above. The ball is in a difficult spot to hit, so you may have to come from the other direction and be on the upper path already when near it if you are having trouble. Once you hit it, you will get the Park Goal unlocked. Just remember that you only have two minutes though, so time is of the essence.