Once again, with the daily login reset happening on Sunday, Warframe will also update its Nightwave acts for the week. Nora’s Choice is in its fourth week, with a refreshed Cred Offerings page and more challenges to complete.

Here are this week’s Nightwave acts:

How to complete the harder Weekly Acts

Newer players may not know what Ayatan Sculptures are. They are these rare pickups you can find in any mission. Players can become accustomed with them if they frequent Maroo at Her Bazaar. Essentially, these can become ship decorations or traded in for Endo.

However, the challenge requires you to socket 3 of these. To fully socket an Ayatan Sculpture, you’re going to have to have Ayatan Amber and Cyan Stars. Using these stars increases the value of the Sculptures. Luckily, they aren’t too hard to come by. Cyan Stars drop quite often from breakable crates and lockers in all types of missions. You’ll know if one drops because the minimap will make a note of it being nearby.

You’ll also hear an audible cue knowing that one nearby has dropped. You will have to manually pick these stars up, though. Sentinels and other companions with a Vacuum or Fetch mod will not pick these up for you. Run a lot of fast missions like Exterminates and Captures, but break a lot of the crates and lockers along the way. These things will drop like candy. Then, once you have a good amount in your inventory, acquire a Sculpture. 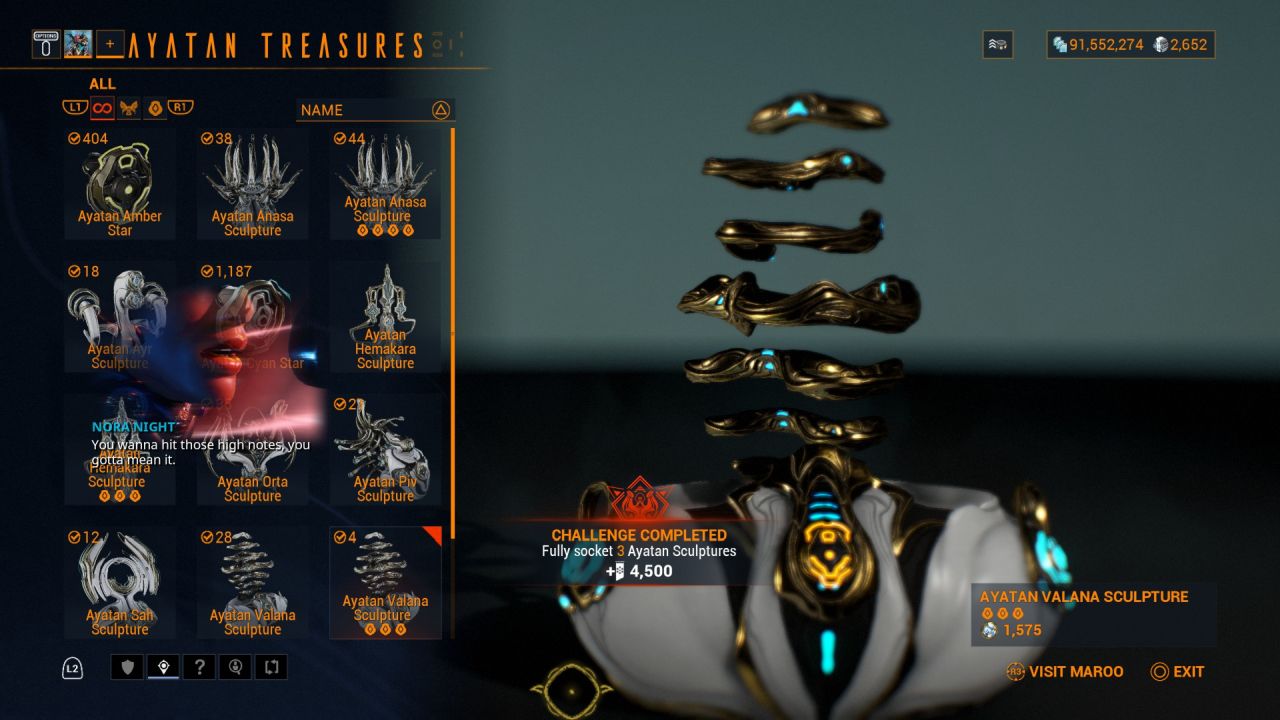 The fastest way to get a Sculpture is to go to Maroo’s Bazaar and accept her Ayatan Weekly Treasure Hunt mission. It guarantees a Sculpture which you can then take to your modding station back in your Liset. Select the Ayatan Treasures option and pick a Sculpture. To save time, you can just select the Auto Install option to fully socket a Sculpture. You’ll know if a Sculpture is entirely filled in when it starts to move around like a fully functional machine. Repeat this three times and the challenge will complete!

Every Warframe player has heard of this man before. The man, the myth, the legend, Clem, is an overdone meme at this point, but a lovable character in the cast. He’ll have a weekly mission available after the completion of the “A Man of Few Words” quest.

Once that’s done, head over to Darvo at any Relay and he should have an extra option that reads “Does Clem need my help?” This will prompt you to start a mission to…help Clem. It’s a ten-minute survival mission where you fight alongside Clem. The mission is very simple; just watch out for the random appearance of a field boss depending on the tileset. Upon mission completion, you’ll be rewarded the standing for the Act as well as a Clem Clone Blueprint.

Nightmare missions are the tougher counterparts of normal missions. They have some kind of mission modifier like energy drain, timed mode, no-shield mode, and others. In order to play a Nightmare mission, you have to complete every node on a planet. There is also one Nightmare mission per planet, so the more planets you have fully unlocked, the more variety you’ll have.

Ideally, you’d want to find a mission that has one of the following modifiers:

Basically, avoid the Energy Drain Mode since it renders every Warframe except Lavos and Hildryn Useless. You would also want to avoid the No Shield Mode modifier if you’re using a Hildryn. Complete three of these types of missions and the rep is yours!

You can easily complete the five tiers of bounties that Eudico gives you in Fortuna and call it a day. However, tiers 4 and 5, plus the Steel Path bounties can be very time-consuming.

A time-saving alternative that I often use is to complete the first three tiers of bounties that Eudico gives you. Then, to complete the other two, you can take on the Exploiter Orb or partake in the Heist bounties in the Vox Solaris room in Fortuna. You will need to have reached the Old Mate rank with Solaris United if you want to take on the Profit Taker Heist bounties, though. Phase 2 of the Profit Taker bounties can be completed very quickly, and has a really good drop table. Finally, taking on the Profit Taker itself and defeating it adds towards the completion of the Venus Bounty Hunter Act.

Long survival missions can be a drag for some players, or in some cases, a tough stat check. The Kuva Fortress is one of the higher-leveled planets in the game. It’s Grineer-dominated, so you won’t have to deal with energy leeching enemies and Nullifiers, but they do have annoying Heavy Gunners, Manics, and Kuva Guardians to periodically deal with.

It’s a Kuva Survival mission which basically acts the same as a normal Survival mission. The only difference is that you can actively farm Kuva by picking up a canister dropped by certain enemies and placing them into the life support capsules. It’s like a hybrid mission between Survival and Excavation. You don’t need to pick up the canisters, though. All you need to do is reach the 30 minute mark and then complete the mission.

If you feel like your gear may not be up to snuff, there are people who are more than willing to start up a group in the recruiting chat.

Overall, this is a very simple and straightforward week. Nothing will be too hard to complete other than possibly the Venus Bounty Hunter and Hold Your Breath challenges.