Swat down these pesky Grinner flies with ease. 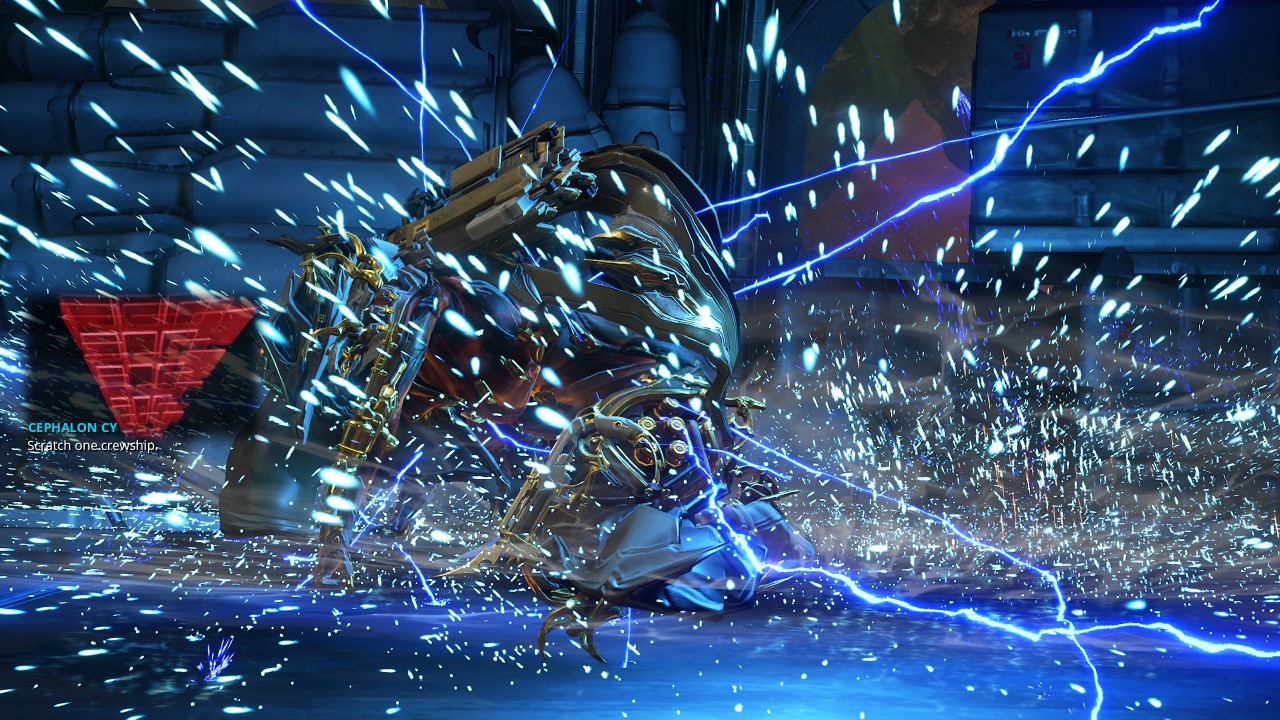 You’re out on patrol, and an armada of Grineer crewships have punched into the system, all of them dead-set on taking your Railjack down. You fire a barrage of missiles, and lay down a continuous storm of Apoc hellfire. The crewships are mildly annoyed by this, and shrug off the damage. You’re pulling your hair out, unable to take these damn things out. Turns out enemy crewships require a touch more finesse than “fire everything we got.”

Crewships can be destroyed via boarding, or by using the forward cannon.

Even without a single Intrinsic point invested, Tenno can pop crewships simply by leaving their Railjack and boarding them. This can be a bit perilous, considering crewship missiles will evaporate your Archwing with a single hit, but after a recent patch these volleys are much easier to avoid. Dodge the incoming fire after leaving the safety of your Railjack, and head for the rear of the crewship. You’ll find a hatch between the engines that leads inside – get near it and the prompt to board will appear.

Once inside make your way across the cargo bay into the main cabin, either avoiding or slaughtering the Grineer within. You’re goal is the reactor at the center – in the front half of the Railjack star chart the reactor will not possess shields, so a few clean shots will blow it to Hell. The crewship will catch fire, and you will want to leave before it blows (there will be a timer to the right indicating how much time you have). If there is a shield then you simply hack the console in front of it, then nuke it.

Alternatively, you can clear the crewship and man it for yourself. There are two side guns in the main cabin, and the the pilot’s seat in the flight deck. The armaments within the crewship do decent damage to enemy fighters, and taking one over isn’t a bad way to contribute, especially if your Railjack’s weapons are a touch…soft.

If you enjoy boarding crewships, then you should look into Rank 3 and Rank 4 of Gunnery, which will allow you to use the Archwing Slingshot. At Rank 3 you can enter the Slingshot and propel yourself towards the crewship, but you will still need to board manually. Rank 4, however, punches you into the crewship. The Slingshot requires some coordination, considering it’s limited aiming angle, but it’s a phenomenal way to get into a crewship without dying. Pair this technique with Rank 4 Tactical to use your Omni tool to teleport back to your Railjack, and you’ll find yourself able to rid the stars of enemy crewships rather rapidly.

Do remember this, however, if you plan to board: Railjack enemies are tougher than their non-Railjack peers. You’ll want to either bring a stealth frame if you aim to bypass them for the core, or a frame that can murder with impunity without getting destroyed themselves (personally, I use Mesa for this).

If boarding sounds a touch too spicy for you, you can instead push towards Rank 5 in Gunnery, which will allow you to use the forward artillery Dome cannon. It has limited ammo, though, so you or a teammate will need to have Rank 5 Engineering unlocked if you wish to resupply the cannon at the Forge.

Other than that it’s simple enough to use: jump into the cannon via the seat behind the navigational console, and coordinate with the pilot to line up the shot. The cannon takes a second to charge, so it’s critical you and the pilot are in sync. At lower levels the cannon will one-shot crewships, but once you get into later Saturn and Veil levels it will take two (thus the need for a Rank 5 Engineer).

For more of our Railjack guide series be sure to check out the guide hub!