Who are the best overall characters to use in the Micro Games? 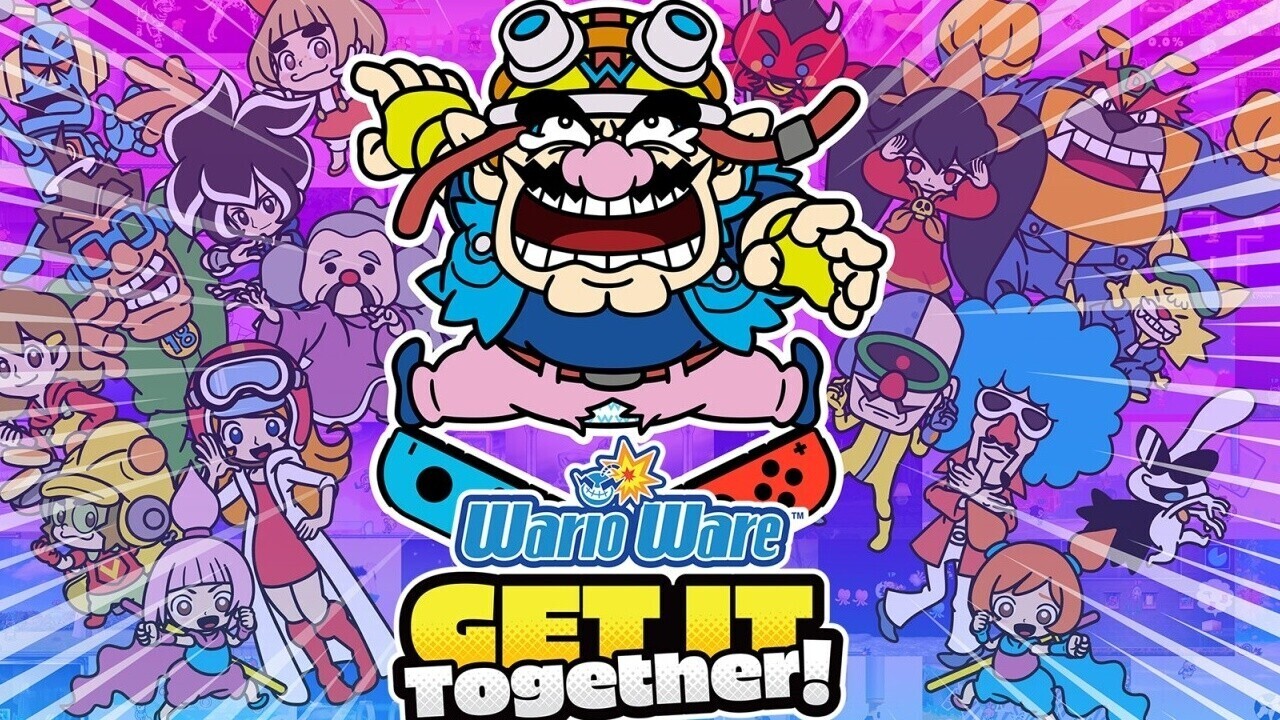 WarioWare: Get it Together! is the latest installment of the WarioWare franchise, and it’s unique in the sense that its ‘Micro Games’ can be played very differently. In other WarioWare games, picking a character only really gave a distinction between players and the theme of games.

In this game, each character plays a role when partaking in these Micro Games. Think of each character as like a sprite in a 2D game or think of them as personalized screen cursors. For example, Wario can move freely because he sports a jetpack. He also has the ability to perform a shoulder dash to the left or right, giving him an all-rounded playstyle.

Another example would be Cricket, the martial arts kid with the awesome hairdo. He plays like a 2D platformer character who can move left and right, as well as jump. There are 18 characters in the game, all with unique playstyles. Each character has their strengths and weaknesses when it comes to these Micro Games. This tier list is based on character versatility when selecting a team composition in Micro Games.

WarioWare: Get it Together! crew members ranked 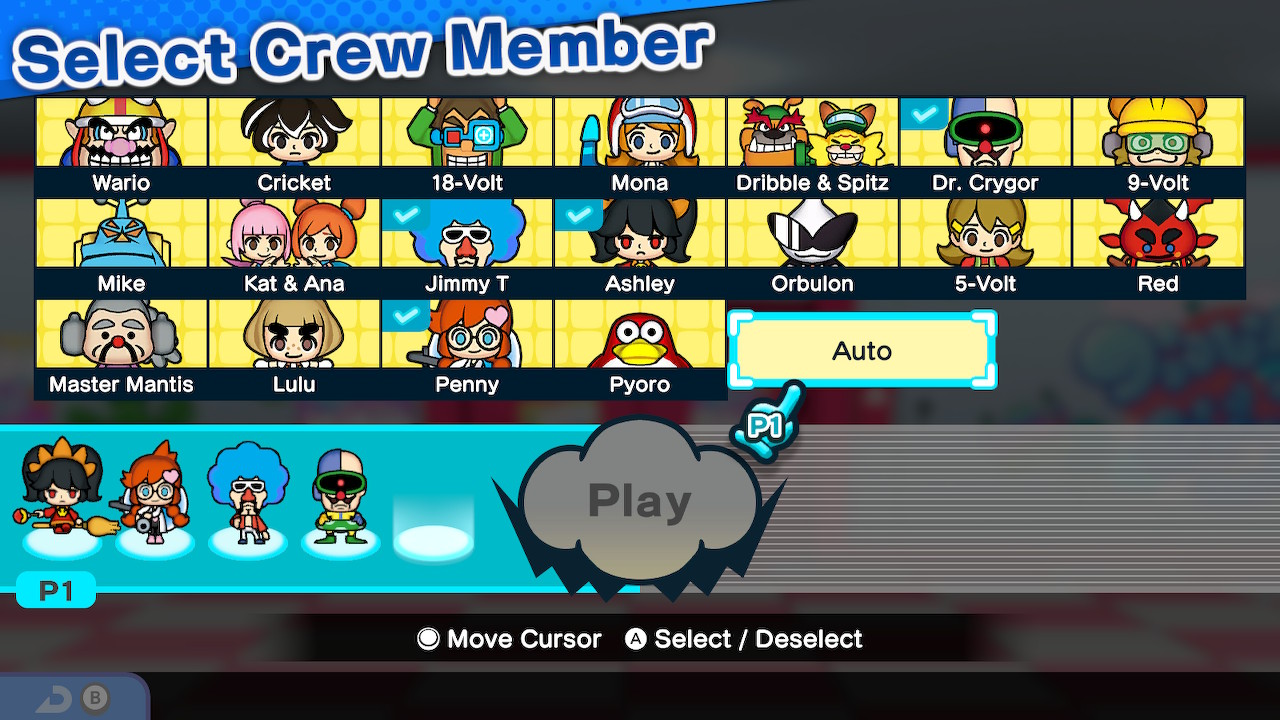 Perhaps one of the most popular characters of the WarioWare franchise, Ashley reigns supreme when it comes to Micro Game versatility. She can move freely in all directions because she flies on her trusty broom. Ashley can also shoot projectiles quite rapidly in the direction she is facing. This allows her to excel in the Micro Games that require distances to be covered, targets to be hit, as well as those that need mild traversing and platforming.

The granddaughter of Dr. Crygor sits just behind Ashley in terms of versatility, though she does require a firm grasp of inverted controls. Penny uses her water jetpack to propel herself in the direction opposite of where she is shooting it. This means she has reliable means of hitting targets and moving freely across the screen like Ashley. She can also stop herself in place to shoot objectives without propelling backward.

The groovy king of disco sits proudly as one of the better and most versatile characters in the cast of WarioWare: Get it Together!. Jimmy T is all about the music and getting his body movin’ and he does so in a fashion where he can take on all sorts of Micro Games. He can move freely in all directions thanks to his groovy dash attacks.

The man who made a cyborg out of himself, Dr. Crygor, sits among the greats in this game. Despite his tummy troubles, he can swim his way in all directions, giving him superior mobility and versatility for games that might require them. 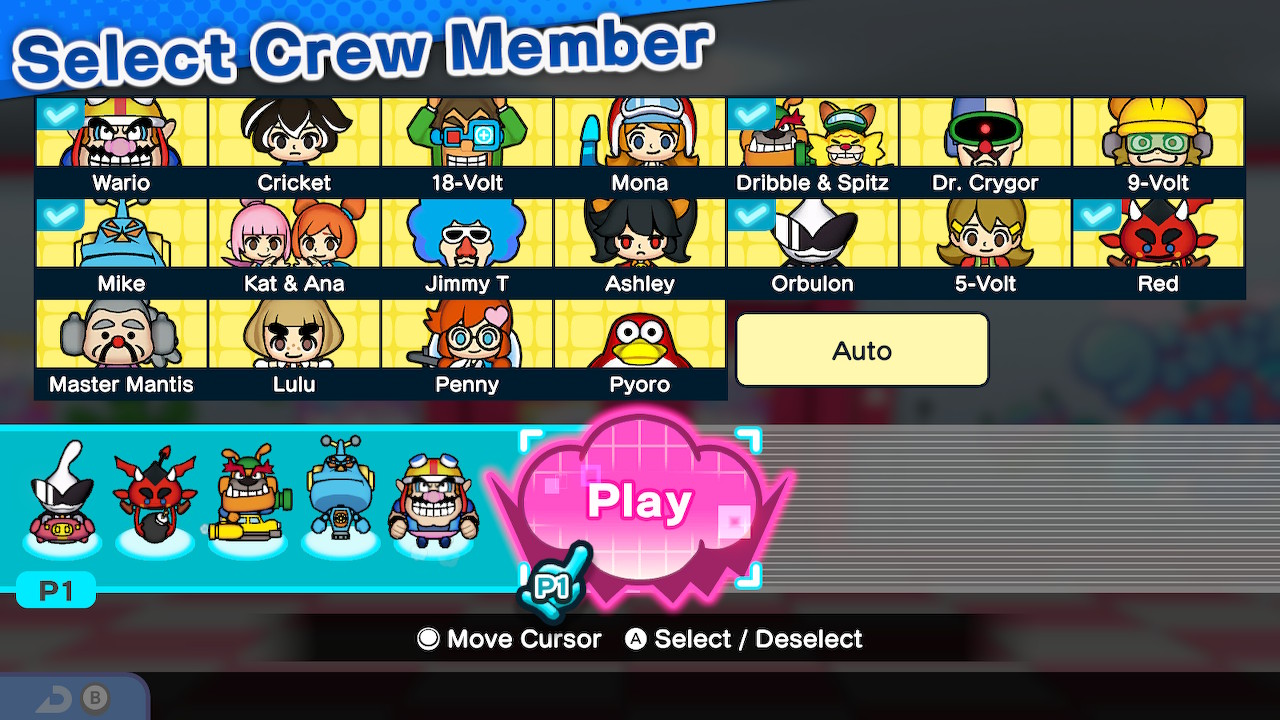 The alien who once tried to take over the world is now buddy-buddy with Wario and the rest of his pals. Orbulon is a highly versatile character who can float in all directions, and quickly too. He makes use of his UFO in the Micro Games to beam down at anything below him, grabbing things and interacting with objectives with ease.

Ashley’s imp best friend isn’t too far off from being one of the better characters of the game. He definitely has his strengths when it comes to mobility. Red has decent utility too, allowing him to drop bombs below him to interact with objectives. However, that is perhaps his only drawback. He can only really fly around with his body or drop bombs below him in a straight, downward trajectory, limiting his reach to things above him or to his left and right.

The dynamic taxi driving duo rank pretty high thanks to their flying taxi and bazookas. Like the aforementioned characters, these two can move freely and fire away to their hearts’ content at anything to the right or left (Player 2 only). Dribble and Spitz can cover a lot of ground and can lock down anything within a horizontal reach. Anything vertical or diagonal may be a bit of an issue for them. Spitz can only be played as a Player Two character.

The creation of Dr. Crygor does not sit too far behind from the other greats. Mike, like the rest of the characters who can move around freely, excels at hitting objectives that are above him. His gameplay is the same as if you were playing Galaga. Move all directions and only shoot up. He’s a solid pick for the bunch.

The head honcho, the garlic enthusiast, the mastermind behind the creation of his latest hit video game. Wario is the starting character who can brute force his way through these Micro Games mostly with ease. He excels in mobility thanks to his trusty jetpack, but can also make use of his physical strength to shoulder dash left and right.

B Tier (Solid, but with notable drawbacks) 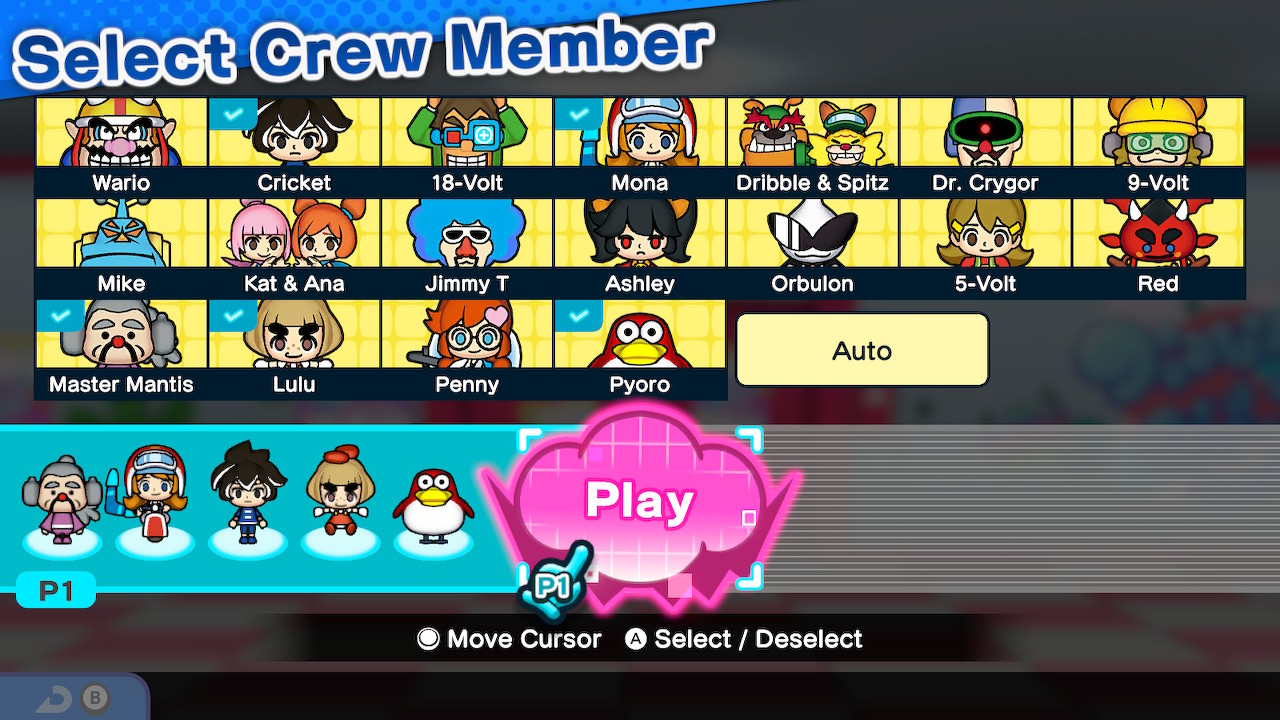 Master Mantis is Young Cricket’s teacher. This guy does not play like the characters listed above. He can move left and right like a normal character can in a typical 2D platforming game. However, Master Mantis can jump abnormally high, basically covering an entire screen length’s vertical spread. He can even jump to the top of the screen, allowing him to walk on ceilings.

The high schooler with a hectic schedule is just around the middle of the bunch. Mona, like some of the higher-tiered characters, has great mobility because of her moped scooter. She can move freely in any direction and she has her trusty boomerang that can be controlled to go anywhere, acting as a solid projectile for her to use. However, with her mobility, she becomes a sitting duck when using her boomerang. You either control one or the other.

Young Cricket, the student under Master Mantis, is an overall decent character. He plays just like his Master, but lacks the ability to walk on the ceiling. Cricket is as standard as a 2D platformer character can be. No gimmicks, just running left and right, and jumping.

A superfan of Cricket, Lulu has the ability to hover thanks to her bow propellers on the top of her head. This provides good verticality. She can also ground pound, making her quickly reach the ground if need be. However, she doesn’t have much other than being able to go up and down. Her horizontal movement is good.

The cute red bird with the Yoshi tongue sits just above being C tier because of his deceptive range and utility. Like the other grounded characters, he can move left and right with no issue. However, he doesn’t have a dedicated means of moving vertically. He can reach high places with the use of his long tongue, but those require good angling since it’s projected at a 45 degree angle. It can bounce off surfaces, though.

C Tier (Niche with many drawbacks) 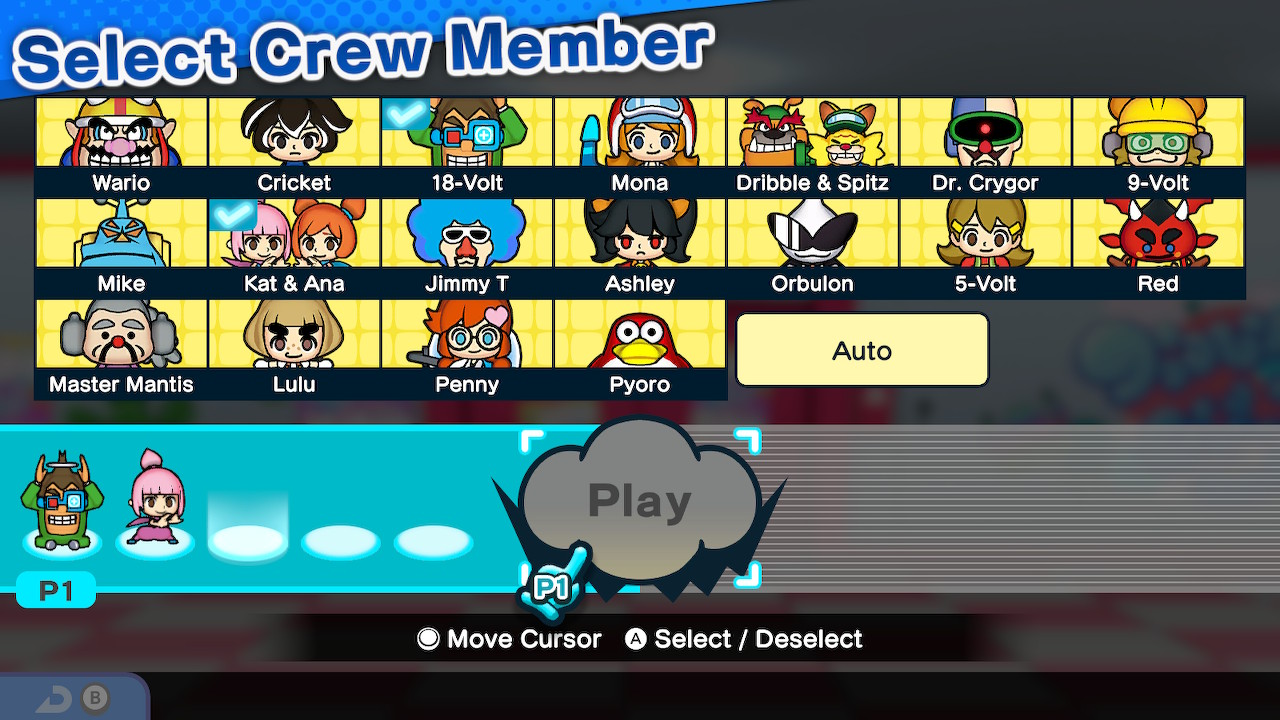 9-Volt’s best friend ranks pretty low in terms of usefulness in this game. He cannot move unless he latches onto the handles provided for him in the Micro Games. Essentially, he’s a sitting duck. 18-Volt can, however, make use of his projectiles to play the games. Missing a handle in games can cost him a life in a marathon run.

The sister ninja duo unfortunately aren’t the most ideal to play with in this game. Kat and Ana have good vertical mobility, thanks to their high jumps. However, that becomes an issue because they jump constantly. That cannot be changed. They could throw their shurikens quite rapidly, allowing for some good reaching potential for objectives that require some horizontal movement.

D Tier (Too many flaws) Most people might know this character as the angry mom in the Gamer stage in Super Smash Bros. Ultimate. If she catches you in her eyesight, she’ll decimate you. She is the mother of 9-Volt, the kid with the skateboard and passion for video games. Her ability in WarioWare: Get it Together! is that she will be completely still, sleeping, but you can teleport her anywhere, turning her angry for a quick second. Her ability to teleport seems cool and all, but in games that require you to constantly be on the move can be a hindrance when she’s a sitting duck until you teleport her elsewhere.

It’s a shame, really. 9-Volt is perhaps the most popular character in this game right next to Ashley and he’s the weakest of the bunch. The skater kid with an unyielding passion for video games requires so much precision, timing, and luck when it comes to playing the many Micro Games in WarioWare. He is constantly moving to the left and right, bumping into surfaces without being able to stop unless you spam the A button. Sure, his yo-yo has a good upward reaching speed, but his movement is too unreliable for the more precision and timing focused games in the bunch.

WarioWare: Get It Together!