WWE 2K16 Guide: How To Do Every OMG Moment/Finisher 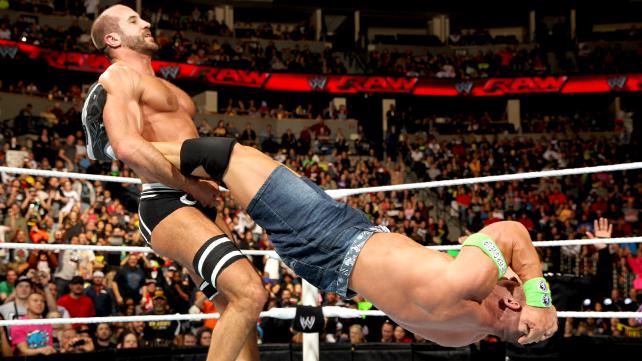 There are many OMG moments that you can do in WWE 2K16. Some of them are new, while some are repeats from last year. We’re here to explain how to do every OMG moment we have found in the game so far.

There are varying parameters in place for several OMG moments. Some of them require you to store more than one finisher, while others can only be used once per match. Not only that, but you have to place your opponent in the right position too.

Big E Suicide Dive Spear: To do this, all you need is one finisher. Just put your opponent groggy on the ropes and press Y (Xbox) or Triangle (PS). This can only be performed once per match.

Cesaro Swing:: One finisher is needed to be stored and your opponent has to be lying on the floor. Go to their legs and just press Y or triangle when you see the OMG logo. Another once per match move.

Cesaro’s Apron Superplex: This move you have to be inside the ring, while your opponent is resting on the outside portion of the ring apron – preferably in the middle. Press Y or Triangle when the OMG logo pops up. The Apron DDT is performed in the same way.

Sami Zayn’s Tornado DDT: This one is easy. Just toss your opponent to the corner turnbuckle. Once you see the OMG moment, press the finisher button and you will see the move. This is another once per match move.

Roman Reigns’ dropkick: This is similar to how you perform the Sami Zayn DDT. Just toss your opponent to the turnbuckle and press the finisher when you see the OMG moment. Again, can only be done once. The Outside Superplex is the same methods as above. 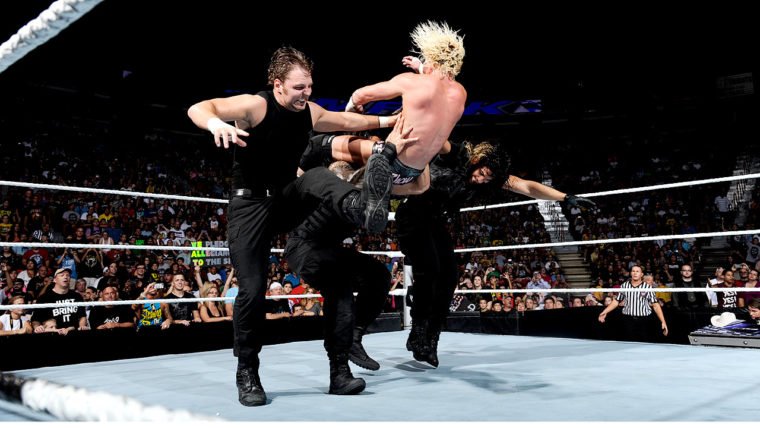 Shield Triple Powerbomb: This move can only be done when you are Roman Reigns teaming up with Seth Rollins and Dean Ambrose in a tag match. With Roman Reigns as the legal man and you are controlling him. Put your opponent down on the mat until you see the OMG logo.

Elbow drop to commentary table: Press left bumper (Xbox) or L1 (PS) to remove the lid of the commentary table. Toss or irish whip your opponent on the middle of the table. Press the finisher button when you see OMG.

Big Boot: Toss your opponent to the ring post on the outside. Press the finisher button and then the move will happen. This one is easy to perform.

RVD Spinning Kick: RVD is not in WWE 2K16, but you can still do his move. Just toss your opponent to the barricade near the ring apron. Press the finisher button to see the move.

Catching Finishers: To do these like an RKO for example, press LB or L1 when your opponent is running. Quickly press the finisher button to do it. Alternatively, can also be done when an opponent is flying off the top rope.

Double Finisher: This requires three finishers stored. Can be done using the F-5, AA, Chokeslam or Shellshock. Toss two opponents to the corner turnbuckle and then press finisher button for the OMG.

Breaking the Ring Superplex: Must have three finishers stored and only two super heavyweights must be wrestling. Toss your opponent to the corner turnbuckle. Press the finisher button to see the ring break. The match ends with in a KO.

Home / Game Guides / WWE 2K16 Guide: How To Do Every OMG Moment/Finisher