WWE 2K16 Guide: How To Get 5 Star Matches In MyCareer Mode 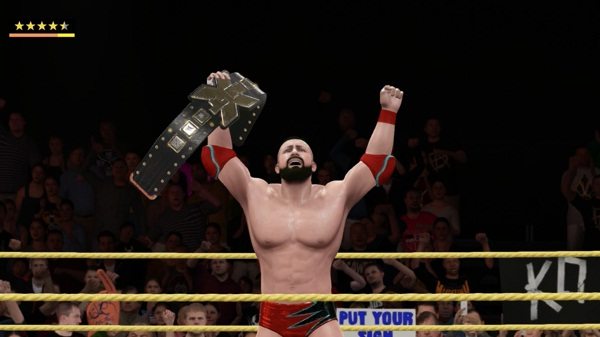 In MyCareer Mode in WWE 2K16, you will be ranked on how entertaining your match is. To get the 5 star rating, there are a few things that need to be done in order to reach that high.

Getting 5 stars in WWE 2K16 is not essential, but it will help you earn more points to boost up your wrestler’s attributes at a quicker rate. You will also gain more fans by putting on entertaining matches too.

An important thing you have to keep in mind is “move variety”. By doing lots of different moves, you will fill the bar at a much quicker rate. Try and avoid spamming the same move over and over again as this will make your match boring and monotonous.

You might know how to do different moves yourself already. Grapple the opponent by using different directions on the analog stick. Striking an opponent with varying kicks and punches also works too.

If you run out of front grapples and strikes, try grabbing opponents from behind or on the ground. After that, try all of your running strikes and grapples too.

To make things more interesting, going on the top rope also fills the bar quickly too. Fighting outside of the ring and tossing the opponent to the barricade helps a bit too. Just don’t spam clotheslines all the time as you might do when playing online.

Upon doing all of this, you should have earned a signature. Signature moves are exciting to the audience. After that, you will have a finisher. Ending matches with a finisher also adds some flair to the match.

You can also save your finisher and do a OMG moment instead. The best way to do a OMG moment is have one finisher stored and toss the opponent on the commentary table. Remove the lid of the table by pressing left bumper (L1 on PS4). After that, irish whip your opponent on the middle of the exposed table. After he’s resting, you should see an OMG icon. Press Y (Triangle on PS4) to do the OMG moment.

Defensive strategies helps you get a 5 star ranking in WWE 2K16’s MyCareer Mode. By countering and reversing your opponent’s moves, you will get the “back and forth” message.

Another thing you can do is add drama. This is done by allowing your opponent to beat you up a bit and pinning you. Instead of kicking out at one, try kicking out at the two count at the last second. Pretty much, just do what John Cena does all of the time. Just make sure to kick out and don’t lose.

This is pretty much all of the things you should be doing in order to get a five star match rating. If you are in a special type of match that involves weapons, you can use them to effectively too. Using two finishers or an OMG moment makes matches exciting too. Most important of all, use lots of moves. Using only five moves in one match won’t cut it.