Yooka-Laylee Guide: What Are The Secret Achievements/Trophies?

The latest news in the world of video games at Attack of the Fanboy
April 12th, 2017 by Dean James 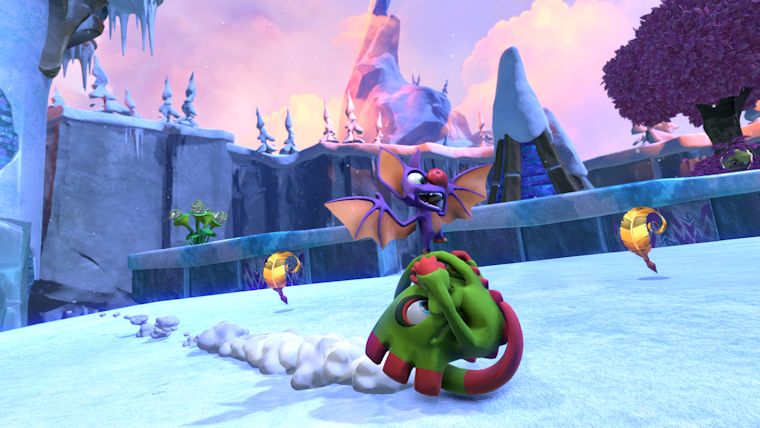 Two of these secret achievements/trophies are pretty simple and it’s likely you’ll come across them during the game. These two simply require you to expand three Grand Tome worlds and expand all Grand Tome worlds. This is a natural progression in the game as you need to find more Pagies, so this shouldn’t be a problem.

The other three however are hidden very well in the game, with a few being insanely hard to come across without knowing where to look. These involve the hidden pirate treasures in the game, which are just crystal skulls you’ll find one of in each world.

The three achievements, which are titled Pirate Pillage, Secret Salvage, and Captain’s Cache require you to find one, three, and all five pirate treasures respectively.

You will need to wait until later in the game when you have the ability to fly to attempt finding these, as they will be required to reach the areas for at least most of them. The first pirate treasure is found in Tribalstack Tropics in the building connected to the first world boss. When facing the bridge to go towards the boss, use your fly ability and head off to the right side of the building to notice a piece of wall missing. Fly into that hole and you will find your first skull.

The next pirate treasure is found in Glitterglaze Glacier and specifically is in the Gloomy Gem Grotto area, which is found by diving in the first giant pool of water near the beginning and swimming into the underwater cavern. Walk up to where you find the first glow gem and eat one and use your fly ability to fly to the left up to an area you could not go to before. Follow through this and eat more gems if you need to brighten the area up. Eventually, you’ll see a standalone rock tower in the middle of an area, which houses the skull on one of its ledges. Just keep looking around and you’ll find it eventually.

Moodymaze Marsh holds the third pirate treasure, so make sure you start off from the beginning and fly towards where you see a lot of bright blue mushrooms that are shining. In that area, you will notice a metal industrial looking building. On the top of one of its stacks, you will find yet another skull.

The easiest of these to find of all is in the fourth world, Capital Cashino. After entering the world. Simply turn right around and use your fly ability. You will find find the treasure right on top of a light post above the world’s entrance.

Lastly, you need to head to the final world Galleon Galaxy, more specifically the Terminal Velocity section that you can enter by going up a steep hill that has arrows pointing up into it and has a guard robot outside of it. Once inside, go through the first area until you come upon butterflies around a few trees. Go to the right exit here and before going down the hill, instead barely go through and use fly to then fly to the top of the furthest dome in the area. On top of here in the very middle, you will find the final pirate treasure and unlock the final secret achievement.

Home / Game Guides / Yooka-Laylee Guide: What Are The Secret Achievements/Trophies?