Zelda: Breath of the Wild Boss Guide – How to Beat Waterblight Ganon 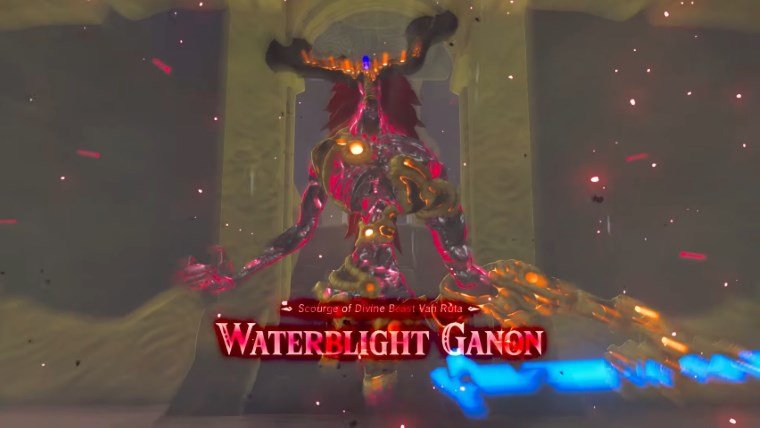 The Divine Beast Vah Ruta dungeon will likely be most player’s first dungeon in The Legend of Zelda: Breath of the Wild. This is good, cause it’s what we recommended you do first, but also because it’s the easiest to complete and gives you a very powerful special ability. To get it though you have to complete the dungeon and then beat the boss: Waterblight Ganon. We gave our walkthrough for Divine Beast Vah Ruta right here, and now we’re going to show you how to beat Waterblight Ganon.

As with all bosses in The Legend of Zelda: Breath of the Wild, the fight against Waterblight Ganon takes place over two phases. The first is pretty simple, just make sure you have a powerful weapon and a shield equipped and able to be used at the same time; no two-handed weapons for this fight.

Waterblight Ganon likes to throw his spear at you, so be ready to move quickly. Otherwise you want to get in close and get hits in whenever possible. He’ll teleport away after a bit, so watch where he’s going, getting ready to dodge or block any attacks that come from him. After doing half his health bar in damage you’ll trigger the second phase, which is a bit tougher to deal with.

In the second phase of the Waterblight Ganon fight, the water will rise making navigation much tougher. Use the platforms to stand, but also use your freezing ability to make new areas to work with, as well as sorts of bridges between the available platforms. You never want to be swimming during this fight, you will get hit.

If you have any shock arrows left over from getting into Divine Beast Vah Ruta then use them now; they’ll do tons of damage against Waterblight Ganon. Otherwise just keep on the move, shifting between your own frozen platforms and the ones available, keeping enough distance between you and Waterblight Ganon for you to dodge, but moving in if he stumbles and eventually you’ll take him down.