Zelda: Breath of the Wild Boss Guide – How to Beat Fireblight Ganon

The latest news in the world of video games at Attack of the Fanboy
March 4th, 2017 by Kyle Hanson 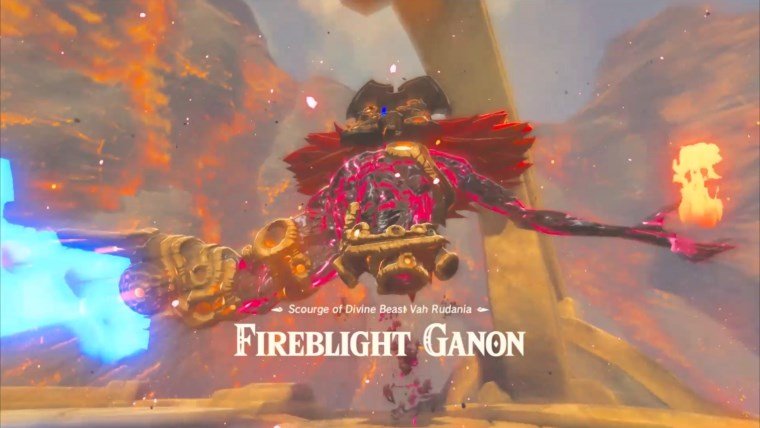 You climbed Death Mountain, you braved the fires and lava and falling debris, and you conquered Divine Beast Vah Rudania, perhaps using our walkthrough a little bit along the way. You’ve done all of this and made it to the end of the dungeon, and you’re ready to face the boss: Fireblight Ganon. Unfortunately, even if you’re tough, this boss has some tricks that might confuse you. So, to help out, here’s our guide for how to beat Fireblight Ganon in The Legend of Zelda: Breath of the Wild.

Fireblight Ganon starts out not being too tough. The biggest problem is that he has a big ax that will do tons of damage to you, if you’re too slow. He’s slow as well though, so get a powerful one-handed weapon out and keep moving. Move in, hit a few times, dodge out, maybe getting a flurry strike along the way. Get him to half health and the real battle will begin.

At half health Fireblight Ganon becomes a real pain, especially if you don’t know what to do. He puts up a fire shield that surrounds his body, then starts flinging fireballs at you, which will explode, doing tons of damage. This one took me a while to puzzle out, since I wasn’t paying close enough attention.

The key is that he draws in everything around him whenever he charges for the fireball attack. You can defeat this by tossing a bomb at him and detonating it when he pulls it in. This will not only bring down the shield, but it will also stun him for a good chunk of time. Get your most powerful weapon out and get swinging.

After doing this he should calm down a bit and you can go back to his normal pattern, so just get in and get some hits. After a while he will start targeting you with a laser. Move quickly and dodge these attacks, then move in for the strike when you can. After enough of this Fireblight Ganon will fall and you will be done with Divine Beast Vah Rudania in The Legend of Zelda: Breath of the Wild.

There’s other dungeons and other bosses in The Legend of Zelda: Breath of the Wild though, click here for all of our guides.