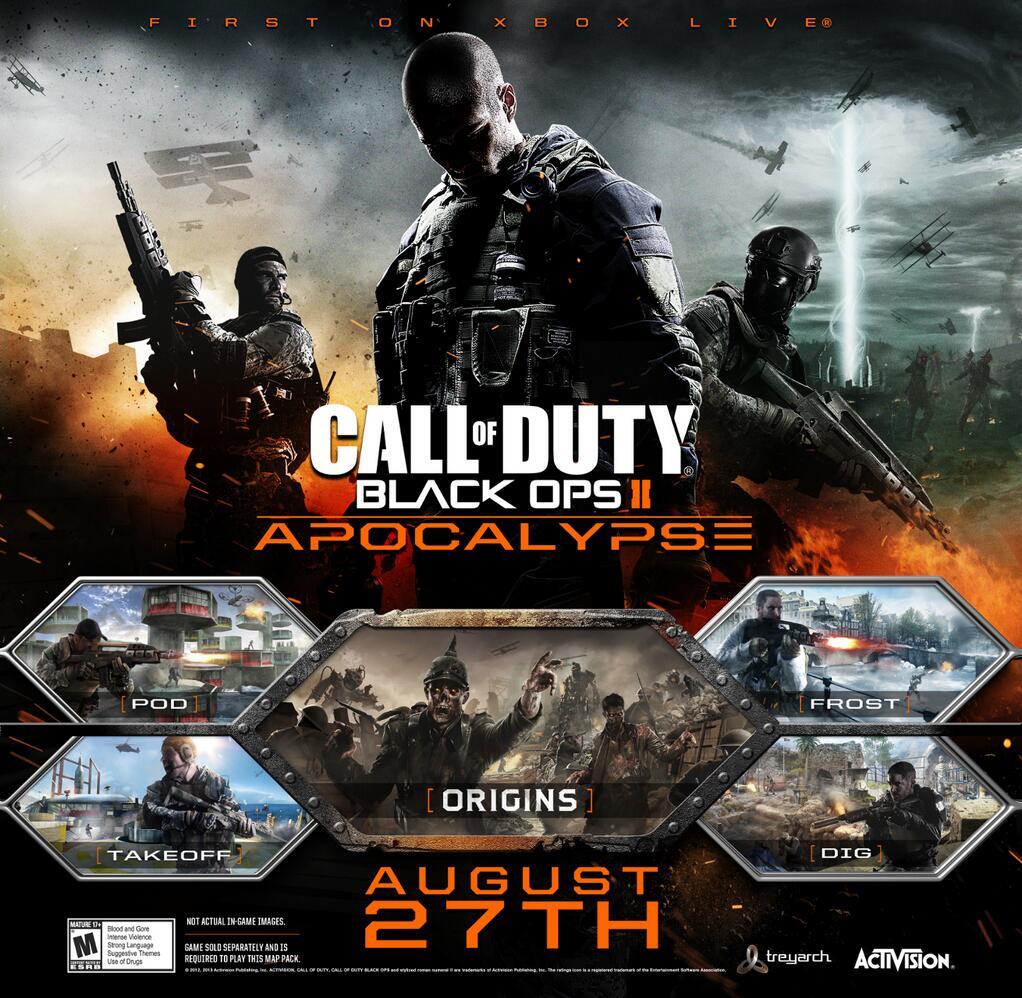 With Apocalypse, Activision Publishing, Inc., a wholly owned subsidiary of Activision Blizzard (Nasdaq: ATVI), and its award-winning studio Treyarch have partnered with award-winning Warner Bros. Records rock band, Avenged Sevenfold, who contribute the song, “Shepherd of Fire” from their upcoming album, “Hail to the King,” to the Zombies experience, which will be featured in the intro cinematic video for “Origins.” Along with Avenged Sevenfold, famed comics illustrator and painter, Alex Ross, has also lent his talent to “Origins,” providing original art that features the original Zombies heroes. One of the most esteemed comic book artists of all time, Ross is most famous for his work with DC and Marvel Comics, and has won many notable awards for his artistic design.

“Apocalypse is Treyarch’s grand finale to Call of Duty: Black Ops II,” said Treyarch Studio Head, Mark Lamia. “It is the perfect culmination of our efforts, and fan feedback, with two all-new multiplayer maps for players to experience for the first time, and two fully reimagined fan-favorite multiplayer maps from past games – and Origins, our most epic Zombies experience to date. Apocalypse is a DLC pack that our fans will never forget.”

In addition to the four maps, Apocalypse also reveals Origins, the most horrifying and imaginative Zombies experience to date. Players will be deployed to Dieselpunk-stylized World War I-era France where they will encounter the return of the four original heroes from the very first Zombies map, Tank, Nikolai, Takeo, and Rictofen, as well as hordes of zombies that have overrun trenches and fields, as well as the ruins of a mysterious and ancient location.

Unleashed after the Germans unearthed the mysterious “Element 115,” this next chapter in the Zombies legacy will explore the saga’s origins as players reunite with an unlikely band of soldiers that come together to defeat the greatest evil the world has ever seen, using a period-specific arsenal that includes Wonder Weapons that harness supernatural powers, a diesel-drone and Mark IV tank, as well a new perk machine and power-ups – and that’s just the start. Players will need all the help they can get to succeed in defeating the undead, as well as evading an unprecedented 1,000-foot tall robot abomination. In this stylized undead adventure, they’ll need every advantage if they have any hope of surviving one of Treyarch’s deepest Zombies experiences to date.

Call of Duty: Black Ops II Apocalypsewill be available first, exclusively on Xbox Live for the Xbox 360® games and entertainment system from Microsoft for 1200 Microsoft Points on August 27, with other platforms to follow. Players who have already purchased the Season Pass can download Apocalypse as soon as it becomes available.